VATICAN CITY (RNS) — The incoming Biden administration will need to rebuild trust with the Christian community in Israel after years in which Palestinians have felt shunted aside by the U.S. Mideast policy, according to the Latin patriarch of Jerusalem, Pierbattista Pizzaballa.

“We will wait and see how the new administration in the United States is,” Pizzaballa said to reporters in an online news conference on Tuesday (Dec. 15), adding that “it will be hard to rebuild trust, because the Palestinians felt betrayed by the previous administration.”

Pizzaballa, who was named patriarch by Pope Francis in October, is the spiritual leader of  roughly 290,000 Latin rite Catholics in Israel, the Palestinian territories, Jordan and Cyprus.

Christians are “a very small presence in a very large territory,” the prelate explained in his speech, while noting that they make their presence known in charitable works and as a mediator between Muslims and Jews in the region.

President Donald Trump has made numerous shows of support to Israel and Prime Minister Benjamin Netanyahu and replaced the goal of a “two-state solution” — a long-held diplomatic doctrine that envisioned an independent Palestinian nation — with a proposed “vision for peace” that some considered unfairly weighted against the Palestinian demands.

Trump’s decision to move the U.S. Embassy from Tel Aviv to Jerusalem became a symbol of his administration’s disregard for Palestinian hopes. “I think the new administration in the United States is completely different from the previous one in terms of narrative and language,” Pizzaballa said, referring to a speech Monday by President-elect Joe Biden in which he invited the U.S. “to turn the page” and quoted a prayer attributed to St. Francis of Assisi.

Pizzaballa took time to lament the lack of Christian pilgrims to the Holy Land this year due to the COVID-19 pandemic. “Nobody’s here,” noted the patriarch, who is one of six in his administration to have had the virus.

The cancellation of many pilgrimage tours, usually organized by the Franciscan friars, has impoverished the church from a spiritual perspective and economically, the patriarch pointed out. Especially in Bethlehem, the consequences of the pandemic “are generating serious problems for many families,” Pizzaballa said.

In March the Vatican sent economic aid and ventilators to the Holy Land at the height of the pandemic. The Knights of the Holy Sepulchre of Jerusalem, an arm of the Holy See, also gave “support (to) the Christian presence in the Holy Land,” Pizzaballa noted.

Last May, he appealed to the international community for further help, but he said he is hesitant to apply more pressure, “and now we don’t know where to turn.”

The Christmas celebrations will take place in a more “intimate” and “reduced” way, Pizzaballa explained, though his Christian community is still “arguing” with various public authorities about the number of people that will be allowed to participate at the Christmas Mass. 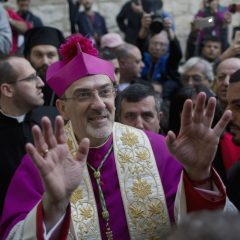 Pizzaballa said the pandemic has complicated the essential interreligious dialogue in the Holy Land and the Middle East. Dialogue with the Jewish community is “still very hard,” especially in Jerusalem, he said, and Netanyahu’s hawkish government has made it “increasingly difficult” for Israel’s political and religious conservatives to understand its Christian population’s views.

On Dec. 6 a Jewish man described as having “extreme right-wing views” was arrested and accused of trying to set fire to the Church of All Nations in the Garden of Gethsemane, a Christian holy site.

Pizzaballa called Francis’ planned visit to Iraq in March “a beautiful gesture of solidarity with the Christian world. The trip will call attention to the plight of the Christian community there, which suffered persecution at the hands of the Islamic State and now struggles with the economic fallout of the war and pandemic.”

“Those who left are likely not going to return,” Pizzaballa said, and he expects that lack of jobs and opportunities will force more to leave.