JERUSALEM (RNS) — Like most Holy Land Christians, Hagop Karakashian’s ceramic shop in the Old City here has always relied heavily on the presence of Christian pilgrims, especially in December.

But the narrow alleyways of his shop’s ancient neighborhood are painfully empty this year.

“Ordinarily, we have a lot of tourists and also local people coming in and buying,” Karakashian said wistfully. “This year is the opposite. There are no tourists, and even the locals aren’t coming due to lack of income and fears of catching the virus.”

To add to the Karakashian family’s down month, they won’t be able to attend Christmas services as they usually do in Bethlehem, where the Palestinian government has imposed a closure on the city of Jesus’ birth.

“We’ll be spending Christmas at home, watching the service on TV,” he said.

Traditionally a festive time, if a busy one professionally, Christmas is usually an opportunity for the Holy Land’s tiny Christian minority, which comprises less than 2% of the Israeli and Palestinian populations (and dwindling), to come together and shine as a community.

Annual Christmas concerts, plays, markets and prayer services have been either canceled or scaled back dramatically. Making matters worse, due to COVID-19 restrictions, family members who have emigrated are barred from returning to the Holy Land for the holidays, leaving those who remain feeling all the more isolated. 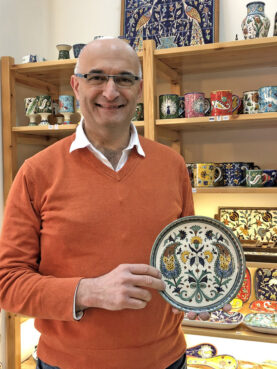 While wars and uprisings have often dampened Holy Land Christmas celebrations, said the Rev. Rami Asakrieh, parish priest of St. Catherine’s Church in Bethlehem, 10 months without pilgrims has caused many local families — both Christian and Muslim — to plunge into poverty.

“The difference is that in previous years we received support from Christians around the world. This year, people everywhere are struggling, so the church has tried to step in by filling the void,” the priest said.

Although local churches have always helped the neediest among their flocks, many of those who have supported the poor in the past are now struggling themselves.

Heddy Nasser, the owner of a popular restaurant near Manger Square in Bethlehem, said her family has been living on savings since their restaurant, like all venues, were shuttered in early March by the Palestinian government’s initial COVID-19 closure of the West Bank.

“We’re near the Nativity church and the hotels, and tourists from abroad used to come to dine with us at night. (Since then), it’s very difficult for us,” said Nasser, who is Catholic. Her 42-year-old son, who used to work at the restaurant, is now unemployed.

“Still, we’re faring better than most,” Nasser emphasized. “God is kind to us. I pray every morning and night to relieve the world of this virus. Money comes and goes, but thank God, we can cope.”

Maria Suad, a Catholic tour guide from Beit Jala, a town adjacent to Bethlehem, and her husband, an incoming tour operator, have both been unemployed since March.

Difficult though this is, Suad has tried to find a silver lining. “This period has allowed us to think deeper about our situation and to reflect on how to continue,” she said. “During the last three years we had so much work, we had no time to stop. This break has been an opportunity to connect spiritually with one another.”

The couple’s only in-person contact with their faith community comes when the parish priest comes to their home to pray with Suad’s 97-year-old mother-in-law.

The one hardship Suad admits to is not being able to fly abroad to visit her grown sons and their families in Italy and Canada for Christmas, as she has done in years past.

“It’s hard,” she said. “To bring some Christmas spirt, I’ve put up more Christmas decorations than ever. At least now I have the time to do so. I’m also praying more. We’re hoping we’ll see the end of this soon.”

Although the pandemic is continuing to bring hardship, it has also prompted spiritual introspection, Karakashian said.

“If anything, it has strengthened our faith. In these difficult times you naturally turn more to God and start praying more. It gives you the strength to go on,” he said.

News
‘Healing will come.’ Catholic community of Waukesha gathers in prayer after parade crash.
Follow us on Facebook!
Submit your photos to RNS