(RNS) — A longtime military officer and minister has been named the new chaplain of the U.S. House of Representatives, Speaker of the House Nancy Pelosi announced Thursday (Dec. 31).

Rear Adm. Margaret Grun Kibben will be the first woman to serve as chaplain of either chamber of Congress, according to Pelosi’s announcement. Kibben, an ordained Presbyterian Church (USA) minister, has previously serviced as the U.S. Navy’s chief chaplain and chaplain of the Marine Corps.

“Her integrity, experience and patriotism will serve the Congress and the Country well, as she ministers to the needs of Members,” said Pelosi.

In her announcement, Pelosi also thanked the Rev. Pat Conroy, a Catholic priest who was first named House chaplain in 2011, for his service.

“The service of Father Pat Conroy has been a blessing to Members on both sides of the aisle,” Pelosi said. “Throughout his service, Father Pat fulfilled the calling of St. Ignatius of Loyola: ‘for the greater glory of God.’” 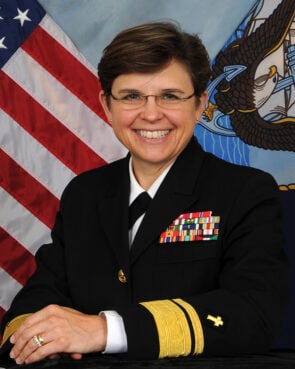 In a 2018 address to the General Assembly of the PC (USA), Kibben said that military chaplains can serve as a moral compass for senior military leaders. Chaplains, she said, also serve young people who have left their home churches to serve their country, as well as people who have no religious ties.

“Many men and women we deal with have never darkened the door of a church, a mosque or a synagogue,” Kibben said.

In that 2018 address, she also encouraged clergy to serve as chaplains.

“If there is any dissonance there, forgive me, but think about it very deeply,” she said. “Christ calls us to serve with the people who need it most.”

According to a statement from Pelosi’s office, Kibben, who holds graduate degrees from Princeton Theological Seminary and the Navy War College, joined the Navy in 1986 through the Navy’s Theological Student Program.

She served as a chaplain for both the Navy and Marine Corps, including a stint as senior chaplain in Afghanistan.