(RNS) — When he mocked the reporter with disabilities, did you laugh, or remain silent — or did you reflect on how such behavior violates biblical teachings about people with disabilities and treating people like the image of God?

When he boasted that he could grab women by their private parts, did you smirk, or remain silent — or did you notice that such words violate religious teachings about respect for women and the proper expression of sexuality?

When he urged violence against reporters, did you cheer him on, or remain silent — or did you remember that religious traditions forbid gratuitous violence?

RELATED: At the Capitol, evangelicals’ ‘Thou art the man’ moment

When he called for a ban on Muslims entering this country, did you rationalize that, or remain silent — or did you think about how such bans could theoretically turn against any religious group?

When he commented on the neo-Nazis marching in Charlottesville and mentioned that there were “very good people” on both sides, did you nod in agreement, or remain silent — or did you ask yourself whether it is possible for neo-Nazis and Jew-haters to be “very good people”?

When he stood silently as his supporters called for the kidnapping of Michigan Gov. Gretchen Whitmer, did you say that you could understand their frustration, or remain silent — or did you realize that “thou shalt not steal” also applies to stealing people?

When he lied numerous times a day, did you shrug it off, or remain silent — or did you wonder aloud about your religion’s understanding of the meaning of truth?

When he characterized Mexicans as rapists, drug dealers and animals, did you smile, or did you ask yourself how your religious tradition views the stranger and the immigrant?

When you knew about his and his father’s real estate background — denying housing to African Americans, did you say to yourself, “Well, that’s business,” or remain silent — or did you ask yourself about what your faith says about race?

When he denied climate change, defying science, did you say, “Well, that’s his opinion … ” or remain silent — or did you probe how religious teaching views our responsibilities to the earth?

When he used the Bible as a prop in front of a church in Washington, D.C., and held it upside down, did you applaud his feigned religiosity — or did you say: “Wait — that’s my holy book … ”?

When you heard that he was pro-life, did you embrace that stance without question, or did you somehow reason that it is confusing to care about fetuses and not about real children in cages?

I could continue with this litany — or, as would be appropriate, chant it according to the haftarah (prophetic) melody. 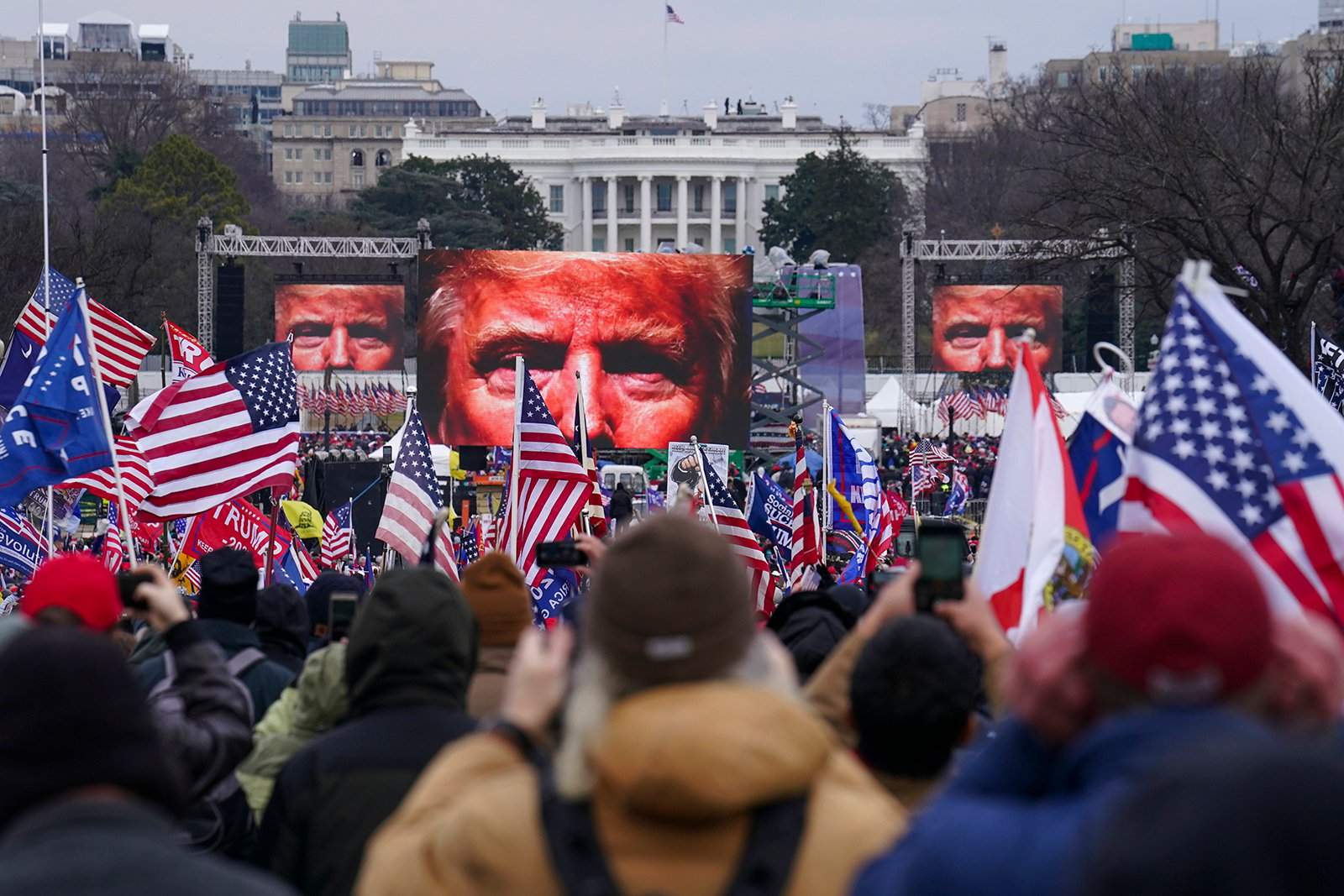 Trump supporters participate in a rally Jan. 6, 2021, in Washington. As Congress prepared to affirm President-elect Joe Biden’s victory, thousands of people gathered to show their support for President Donald Trump and his baseless claims of election fraud. The president addressed the rally on the Ellipse, just south of the White House. (AP Photo/John Minchillo)

But I want to narrow my focus, away from that generalized thing called “religion” and focus on my own people and those who proclaim my own faith.

President Trump won, according to the best estimates, somewhere between 20% and 30% of the American Jewish vote — some of my “best friends,” relatives and cherished congregants voted for him.

I refuse to demonize them. They had their reasons for doing so, and I have long advocated that we need fruitful, heartfelt conversations about politics and values so that the various sides of the political chasm can truly hear each other.

But, if you are a Jew who cares about Judaism and its religious teachings, know that our faith is built on questions. You can’t get out of the Passover Seder without encountering at least four of them.

When Trump said that he only wanted Jews and not Black people to count his money, did you laugh, or did you frown?

When he pretended not to know who David Duke was and initially declined to refuse his support, was that acceptable, or did you somehow suspect that something was wrong?

When he retweeted an image of a Jewish star superimposed over a pile of cash, did you question it, or were you disturbed?

When you read Trump’s quote about Jews: “A lot of you are in the real estate business because I know you very well. You’re brutal killers, not nice people at all. But you have to vote for me, you have no choice,” did you applaud, or did you begin to sweat?

When he told the Republican Jewish Coalition: “You’re not gonna support me because I don’t want your money. You want to control your politicians, that’s fine” — did you smile knowingly, or did you say to yourself: “Wait a moment. … ”

When he addressed an audience of American Jews and referred to Israel as “your country,” did you agree, or did you say to yourself: “No, the United States is my country”?

When he constantly hemmed and hawed about the Proud Boys, the alt-right and other anti-Semitic groups, did you skip over that and find other reasons to continue your support, or did you start to worry?

When you watched what was unfolding on Jan. 6, 2021, did you say: “Well, at least he moved the U.S. Embassy to Jerusalem … ” or did you ask yourself: “There is an affirmation of the embassy in Jerusalem, and there is an attack on the Capitol in Washington. Which of these acts is more important to me”?

When you watched what was unfolding on Jan. 6, 2021, did you see the faces of the barbarians who attacked the Capitol? Did you realize that they were coming after our elected officials?

Did you, at least once, ask yourself what Judaism thinks of government? (Clue: We say a prayer for the government in our services.)

Did you see the gallows that was erected?

Did you see the guy with the flag of the Confederacy?

Did you notice the guy with the “Camp Auschwitz” T-shirt? Did you look at that crowd of miscreants, whose actions were truly, beyond measure, deplorable? Would you have felt at home in their midst?

Did you think about Germany in the 1930s? At least once?

Did you ask yourself: “Is this what my support of this man has finally wrought?”

All this time — for the past four years and beyond: Did you say nothing?

Did you ever read that little slice of Talmudic teaching: “Silence implies consent”?

If, all this time, you were silent, did you really mean for your silence to be consent?

RELATED: Truth over power: It is past time for the church to speak plainly about the election