Three in four Black church attenders — defined in the study as African Americans who attend a majority Black church — agree “when it comes to politics, Black people generally feel powerless,” with 30% agreeing strongly. About the same percentage of Black Americans in general — 73% — reported such a sentiment, a higher percentage than in 1996, when 61% said they agreed with the statement.

The report was released Monday (Jan. 18) on Martin Luther King Jr. Day, and two days before the inauguration of President-elect Joe Biden and Vice President-elect Kamala Harris, the first Black woman in that role. The findings are the first of several reports from Barna’s State of the Black Church project.

The results are based on responses from some 1,800 Black Americans, including more than 800 who attend a Black church. The survey was conducted in the spring by the California research firm.

“We have conducted hundreds of studies about faith and culture, and we have found consistently that Black Americans have a more active faith — in prayer, reading Scripture and worship — than other racial groups in this country,” said Brooke Hempell, Barna’s senior vice president. “And during 2020, this heritage bore remarkable fruit, as Black Christians showed resilience in their faith and powerful social impact in politics and justice issues, even in the face of significant trials.”

The research indicates that the Black church may be providing a respite for Black people who feel they do not have sufficient political power. 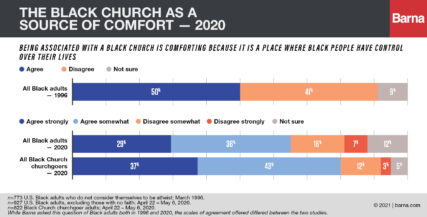 Eighty percent of Black church attenders agree that “being associated with a Black church is comforting because it is a place where Black people have control over their lives.” More than a third (37%) agreed strongly with that statement.

An increasing number of Black Americans in general agreed the church is a source of comfort and control, increasing from 50% in 1996 to 65% in 2020.

“Given the coinciding increase in a broader sense of powerlessness,” the report reads, “present attendees in Black churches may see their congregations as autonomous spaces to reclaim agency and be a part of worship communities influenced by the vision and hopes of Black people.”

The report also comes as the Rev. Raphael Warnock, pastor of one of the most well-known Black churches in the country, has won election to the U.S. Senate, making the Democrat the first Black person in Georgia to do so. Warnock is the senior pastor of Atlanta’s Ebenezer Baptist Church, the former pulpit of the Rev. Martin Luther King Jr., a congregation that has long combined its religious beliefs with social action.

That combination is something the Barna poll found to be desirable among most respondents. Nearly eight in 10 Black church attenders (79%) and seven in 10 Black Americans (71%) say the Black church should prioritize both social and spiritual issues.

Although teaching the Bible (55%), offering fellowship (50%) and providing spiritual guidance (50%) were the top issues Black church attenders said should be priorities for the Black church, addressing local poverty and caring for widows and the elderly were next (both 46%). Affiliation with the Democratic Party continues to be strong among Black church attenders, with three-quarters (76%) saying they identify themselves with that political party, compared to two-thirds (67%) of all Black Americans.

But researchers found a decreasing identification with the Democratic Party among younger Black church attenders: More than three-quarters of Boomers (87%) and Gen Xers (76%) identified with the party, but only 66% of millennials and 52% of Gen Zers did.

The report, which noted, “(t)here is not a ‘Black Church;’ rather, there are Black churches,” placed respondents in the “Black Church churchgoers” category based on the racial majority of their congregation and the racial identity of their pastor and a number of other factors, including average attendance of at least “once every six months.”

The findings were based on an online survey, conducted April 22 to May 6, of 1,083 U.S. Black adults and an additional 822 Black church attenders. It had a margin of error of plus or minus 2.3 percentage points. 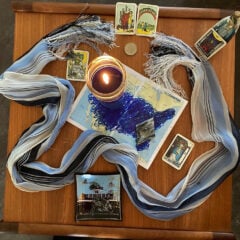 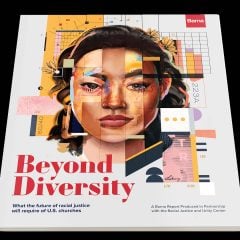