(RNS) — The internet erupted this week with reactions to the 1776 Commission Report, a Trump White House agenda for how to teach U.S. history. More manifesto than report, the 1776 Commission has been called “a staggering blizzard of cockamamie talking points” and a “hack job.” Scholars have critiqued it both on Twitter and in mainstream media.

As a historian of sacred spaces, I was disturbed by another attempt to rewrite history released by the White House yesterday. With about 48 hours left in his term, on Martin Luther King Jr. Day, President Donald Trump issued the Executive Order on Building the National Garden of American Heroes (an extension of this executive order in July 2020). The order envisions a garden populated by 244 statues of “heroes,” ranging from pop stars to military officers to politicians to Canadian emigre Alex Trebek.

Last-minute executive orders can be easily overturned by incoming presidents, so it’s unlikely this garden will ever be built. Either way, it’s a standard move from the political playbook: Monuments, statuary and pleasant places have always given politicians a chance to rewrite history.

Ancient emperors scattered cities with statues of favored heroes, family members, and financial supporters. Italian dictator Benito Mussolini planned a massive campaign to restore ancient Roman monuments — and build his own alongside them to establish a legacy for himself as their rightful heir. Trump has likewise issued other orders to classicize federal architecture. 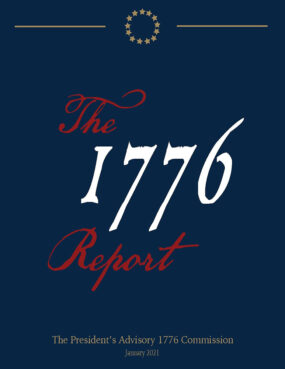 The cover of the report by President Donald Trump’s 1776 Commission. Image via Creative Commons

Trump’s Garden would be another way to tell history through stone.

The executive order makes the purpose of the garden clear: This is a response to Black Lives Matter protests that defaced or toppled statues of slaveholders, Confederate soldiers and Founding Fathers, often erected in the early 20th century.

The order describes these protesters in opposition to true “patriots” and compares them with other “anti-American forces” like the British forces during the War of 1812, the murderers of Abraham Lincoln and Martin Luther King Jr. and the terrorists of 9/11. (Conspicuously absent here are the insurgents who invaded the U.S. Capitol on Jan. 6.)

A garden full of statues may seem relatively harmless (especially compared to cages full of children) but it’s exactly this perception that it is “just a garden” that makes this proposed space so dangerous. Spaces do things to people. The most effective spaces draw visitors in, make them feel welcome, and direct them where to go and how to feel.

Notably, Trump’s order specifies that “all statues in the National Garden should be lifelike or realistic representations of the persons they depict, not abstract or modernist representations.” Nothing here would jump out or surprise the visitor; statues should feel obvious and matter-of-fact. They should not require interpretation.

The garden also intends to teach the visitor a single history. “The statues are silent teachers in solid form of stone and metal,” observes the order.

It is precisely this silence and solidity that makes statues such an attractive medium for those who wish to rewrite history. Rows of stone statues do not conflict, voice criticism or protest.

To be sure, this list of “heroes” includes men and women of many races and ethnicities, from many eras and walks of life. An appreciative viewer might see this as diversity. A cynical viewer might dismiss this as tokenism. I consider it violent.

The garden would conscript representations of people like King, Sacagawea, Rosa Parks and Helen Keller into supporting a single story, robbing them of the critiques they voiced of the U.S. and dismissing the violence they suffered at its hands. Mute, colorless, docile: These marble bodies could not fight back like living protesters can, and they’d be unjustly conscripted to support a false memory of the United States.

If the actual people suggested for statuary were gathered in one place — Harriet Tubman and Thomas Jefferson; Ruth Bader Ginsburg and Barry Goldwater; Junipero Serra and Sitting Bull — there would, of course, be chaos.

The National Garden does the same work as the 1776 Commission, but visually and spatially. The executive order sets the task: “The National Garden will draw together and fix in the soil of a single place what Abraham Lincoln called ‘[t]he mystic chords of memory, stretching from every battlefield, and patriot grave, to every living heart.”

To “fix” is a revealing choice of words. On one hand, both the proposed garden and the 1776 Commission seek to “fix” what the Trump administration sees as history gone awry by holding up an exceptionalist, masculinist, racist, Christian nationalist ideal. On the other, they seek to “fix” into mute stone the bodies that bore the injustices of America, to conscript them into service of white supremacy.

By citing Lincoln’s First Inaugural Address, they invoke the moment before a war. If the commission report is a battle plan, the garden would be a war memorial where “patriots” might envision themselves after, for example, breaching the Capitol.

(Sarah Porter is a Ph.D. candidate in New Testament and early Christianity at Harvard University’s Committee on the Study of Religion. The views expressed in this commentary do not necessarily reflect those of Religion News Service.)