ROME (AP) — The Vatican’s criminal tribunal on Thursday (Jan. 21) convicted the former head of the Vatican bank and his lawyer of embezzling millions of euros in proceeds from the sales of Holy See-owned real estate, and sentenced them to nearly nine years in prison each.

The court also awarded the bank, known as the Institute of Religious Works, some 23 million euros in restitution from money seized from the suspects’ Swiss and Vatican bank accounts that were frozen during the investigation.

Prosecutors had accused former bank chief Angelo Caloia, 81, and his 97-year-old lawyer, Gabriele Liuzzo, of embezzlement, misappropriation of funds and money-laundering between 2001 and 2008, when the bank sold off a sizable chunk of its real estate assets.

The scam allegedly involved the suspects selling 29 different properties in Rome and elsewhere at under-value prices to offshore companies that then resold them at market rates, with the suspects pocketing the difference.

Court-appointed experts estimated the bank lost some 34 million euros in potential revenue due to the under-valuing of the sales, and determined the suspects siphoned off 19 million euros for themselves, the Vatican press office said.

Caloia’s lawyers, Domenico Pulitanò and Rosa Palavera, said they would appeal and noted that their client had been acquitted of the most serious accusations concerning “the majority of the properties.”

The bank’s former manager, Lelio Scaletti, had been implicated in the scam but died during the investigation. Once the trial opened, prosecutors added Liuzzo’s son as a defendant; he too was convicted and sentenced to five years and two months in prison.

The defendants maintained their innocence and had sought to call as witnesses former Vatican secretaries of state and cardinals who sat on the bank’s oversight committee, in a sign they intended to demonstrate that the cardinals were aware of the sales and approved them.

It wasn’t immediately clear how the sentences, which included a combined fine of 28,500 euros among the three defendants, would be carried out or whether the two main defendants would actually serve prison time given their ages.

The trial was significant given that it showed a willingness by the Vatican to prosecute its own for shady business deals that have long characterized the Holy See’s murky finances.

More such cases are in the pipeline, including one involving the Vatican secretariat of state’s 350 million-euro investment in a London real estate venture and the same office’s payments to a self-styled intelligence analyst who was purportedly working to free Catholic hostages in Africa.

Caloia’s lawyers lamented in a statement that the trial took place “in a climate that was on the whole unfavorable to the defense.” It was a reference to complaints by defense lawyers that the Vatican’s outdated legal system didn’t afford defendants the same rights and protections that modern legal systems do. 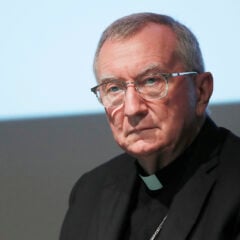 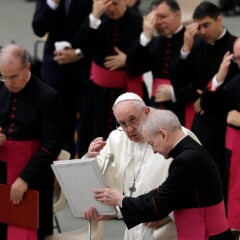 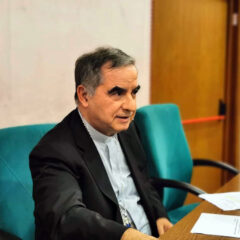