The extraordinary bond that existed between the Rev. Martin Luther King Jr. and Rabbi Abraham Joshua Heschel began in 1963, ending only when King was assassinated in Memphis five years later.

King was born in 1929 in Atlanta and grew up during the violent Jim Crow era of racial segregation that impacted all aspects of King’s daily life. A third-generation Baptist minister, he received a doctorate at Boston University in 1955. Five years later, King became the co-pastor, with his father, of the prestigious Ebenezer Baptist Church in Atlanta.

Heschel was born in Warsaw, Poland, in 1907, the scion of a centuries-old rabbinic dynasty. Like millions of other Jews living in Eastern Europe, he was a victim of state-sponsored anti-Semitism. Heschel, fluent in at least five languages, earned his Ph.D. at the University of Berlin in 1933, the same year Nazi leader Adolf Hitler became Germany’s chancellor. Heschel’s thesis focused on the Hebrew prophets.

I’m proud to say that in 1940 the Hebrew Union College-Jewish Institute of Religion, the rabbinical school I attended, brought Heschel to the school’s Cincinnati campus, allowing him to escape the Holocaust (though many members of his family, including his mother and two sisters, did not). In 1946 he became a professor at the Jewish Theological Seminary in New York City, a position he held until death in 1972 at age 65.

King and Heschel first met at the January 1963 Religion and Race Conference in Chicago, where Heschel delivered a powerful address that began:

At the first conference on religion and race, the main participants were Pharaoh and Moses. The outcome of that summit meeting has not come to an end. Pharaoh is not ready to capitulate. The exodus began, but is far from having been completed.

In fact, it was easier for the children of Israel to cross the Red Sea than for a Black person to cross certain university campuses. Let us dodge no issues. Let us yield no inch to bigotry, let us make no compromise with callousness…some are guilty [of racism], but all are responsible.

King and Heschel bonded at that conference because both were thoroughly immersed in the words and teaching of the Jewish prophets, and theologically rooted to the Hebrew Bible.

Each man also saw in the other a modern prophet. 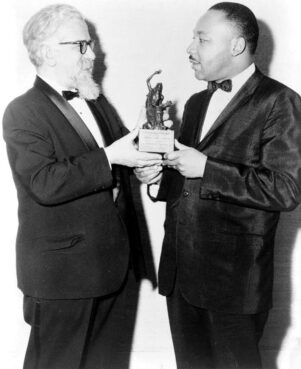 Ten months later, King spoke at the Conservative Rabbis’ Convention, where he expressed strong support for the security and survival of Israel and issued a call for civil rights in America.

In 1965, King publicly endorsed the interreligious movement to free the 3 million Soviet Jews from the U.S.S.R.’s systemic anti-Semitic campaign. He declared: “Injustice anywhere is a threat to justice everywhere.”

In March 1965, Heschel walked beside King in the march from Selma to Montgomery, Alabama. Heschel declared: “I felt my legs praying.”

King aide Andrew Young, later mayor of Atlanta and President Jimmy Carter’s U.N. representative, commented that Heschel spoke and looked like a biblical prophet. Young added that he and many other MLK associates carried paperback copies of Heschel’s book “The Prophets” and constantly turned to Heschel’s words for inspiration.

Historians have noted that King repeatedly used texts and themes from the Hebrew Bible, especially the Book of Amos: “But let justice well up as waters, and righteousness as a mighty stream.”

Even on the last night of his life, while speaking in Memphis, Tennessee, King spoke of Moses, who saw the Promised Land but could not enter it. “… And I’ve seen the Promised Land. I may not get there with you,” he said. “But I want you to know tonight, that we, as a people, will get to the Promised Land. So I’m happy, tonight. I’m not worried about anything. I’m not fearing any man. Mine eyes have seen the glory of the coming of the Lord.”

There was a second great issue that united King and Heschel: America’s involvement in the lengthy Vietnam War. Heschel had long opposed the conflict. Especially upsetting to him were images of American forces burning Asian children with napalm.

For months, King had been cautioned to remain silent about the war by friends and advisers who warned him not to mix his civil rights message with U.S. foreign policy.

Martin Doblmeier’s new film documentary on Heschel, “Spiritual Audacity,” contains original footage from April 4, 1967, when King joined his beloved Jewish friend in publicly denouncing America’s war in Asia. (Full disclosure: I am among those interviewed in the film.)

The documentary dramatically captures that moment, as well as the angry criticism King received from many allies. But he stressed that prophetic religion and a just society are inextricably linked.

King influenced many Jews and Christians to join in condemning America’s involvement in Vietnam: “A nation that continues year after year to spend more money on military defense than on programs of social uplift is approaching spiritual death.”

He was appalled by Vietnam’s devastation at the hands of “deadly Western arrogance,” noting, “… we are on the side of the wealthy, and the secure, while we create a hell for the poor.”

A year later, Heschel and King’s alliance was forever shattered by an assassin’s bullet. But during the few years they labored together in God’s vineyard, the two men achieved an honored place in American history and gained immortality.

Opinion
We told Pope Francis nonviolent action may be needed to stop climate change
Follow us on Facebook!
Submit your photos to RNS