It is not uncommon for papal encyclicals to be translated into multiple languages, including Russian, but they are rarely recognized officially by the Vatican. Russian is also not among the languages that receive official translations of papal documents issued by the Vatican.

The Muslim International Forum, a group of Muslim experts and leaders who foster peace and dialogue initiatives, translated the encyclical and presented it on Wednesday at the “Pokrovskie vorota” cultural center in Moscow. Russian Orthodox representatives were also present at the event.

Francis capitalized on the opportunity to mark what many are regarding as an important step in Muslim-Catholic relations and the Catholic Church’s relations with Russia, both of which Francis has been determined to improve.

“I believe that the reflections and dialogue in this encyclical may be of help not only for the Russian Federation, where dialogue between Christians and Muslims is destined to grow, but also for the entire human family as a whole,” said Francis in a statement on Ash Wednesday (Feb. 17). 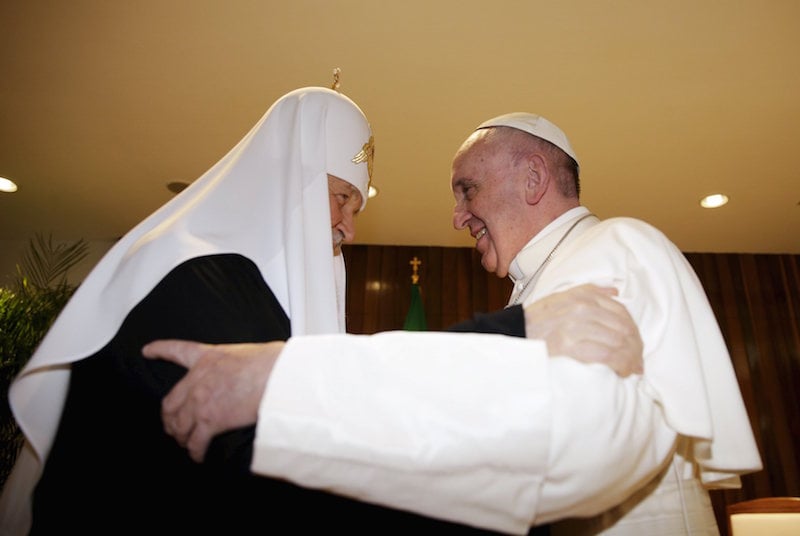 “In the globalized and interconnected world we live in, a gesture made in one corner of the world has repercussions in every other part,” Francis wrote. “I am hopeful that an open and sincere dialogue on the themes of Brother All can promote dialogue between religions.”

Relations between the Russian Orthodox Church and the Vatican have been historically difficult, but in a 2016 meeting in Havana, Francis and Patriarch Kirill made gestures toward appeasement.

For his part, Paolo Pezzi, the Catholic Archbishop of Moscow and pastor to Russia’s approximately 700,000 Roman Catholics, told Vatican News, “This event brings joy and surprise. It reinforces the idea that fraternity is the only viable way, that the culture of encounter that the pope refers to is necessary.”