In the summer of 2019, on a trip to Salt Lake City, I spent an afternoon at the temple. There I was able to take advantage of a “live” endowment session—one that used ordinary members to play the parts of Adam, Eve and other characters in the creation story, rather than just having attendees watch that drama unfold in the temple movie. I told a friend that since the Salt Lake temple was scheduled to be renovated from top to bottom, I wondered whether it might lose its unusual live sessions once the renovations were finished. Just in case, I wanted to experience a live session one last time.

I’m glad I did, since the Church of Jesus Christ of Latter-day Saints announced last week that the Salt Lake and Manti temples, the last remaining Mormon temples to use “live actors” to play the various roles, are being retrofitted to become like every other temple in that respect. Worshipers will no longer progress from room to room as the creation story unfolds, but instead “transition to single-room presentations by film.” Also being lost: the historic murals on the temple’s interior walls, which are beloved by many members.

The Church’s announcement emphasizes how much more efficient the renovated temples are going to be. The Salt Lake temple will be able to have double the number of patrons, and can host endowment sessions at least every half hour instead of every hour.

The watch words in the press release are things like “greater capacity” and “larger” and “more.” It strikes me as the height of the Church’s modern, corporate mentality that bigger is by definition better.

And here’s another buzzword: “same.” As the announcement states,

“With each of these temples, there is a desire to ensure that the learning and experience are similar for all who come to the temple from anywhere in the world. The same ordinances, covenants and authority are available in every temple, and will now be presented in the same way, and now in more than 80 languages.”

I’m sad that there will no longer be a single Latter-day Saint temple anywhere in the world that preserves the live endowment. It’s not like there aren’t 18 other temples right there in Utah, all showing the temple movie and contributing to the sameness of the experience all over the world. Why couldn’t just one or two temples retain this important link to our history?

I’m not bellyaching just for the sake of resisting changes to the temple. I mean, there are plenty of aspects of the temple that I’m thrilled are firmly behind us, like forbidding anyone with African ancestry from entering the building. (In fact, Mormon racism was once so entrenched that in 1966, President David O. McKay and his counselors clarified that temple ordinances could not be performed for Black people even if they were dead. The policy was that any deceased person could be baptized or endowed, “except those of known Negro blood, without the consideration of worthiness or any other qualification.” In other words, a murderer or rapist who had had white skin in life could still receive temple ordinances, but no one with black skin could, regardless of their righteousness.)

Other temple policies and practices that I would venture to guess no one misses include two gems from Brigham Young’s time: that a man “should not touch a woman for 10 days” before receiving his endowment, and that a woman “should not go for a week after her menses were upon her.” 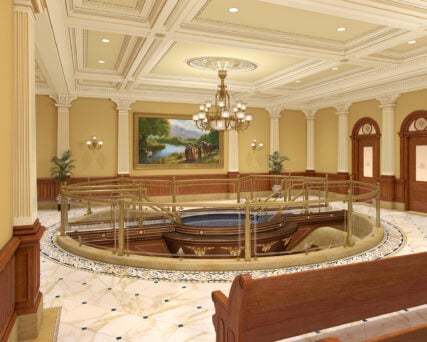 A rendering of a second baptistry that will be built in the renovated Salt Lake Temple 2021 by Intellectual Reserve, Inc. All rights reserved.

My point is that temple rituals have evolved. The clothing we wear to the temple, who we consider worthy to enter it (and at what time of the month!), the sacred rites we perform there: in these ways and more, the temple is vastly different today than in the past. For example, we no longer baptize members of the Church for their own health and healing. No one who is struggling with cancer or heart disease gets to enjoy a special temple ritual of immersion in baptismal waters. Today, temple baptisms are performed only for the dead, and they are rites of other-worldly salvation, not earthly health. The ritual of the Second Anointing, once common among members, is now restricted only to the highest leaders of the Church.

This is normal. In a living religion, some things endure, some things disappear, and all things change over time.

I’m not so sanguine about the loss of live endowment sessions, which serve a purpose beyond merely reminding us of the way the Church used to be back in the day. In fact, the first time I ever heard about them being performed in the Salt Lake Temple was from a friend who was explaining that this mode of the endowment had helped her to understand more fully that the ritual is intended to be symbolic, not literal. There was something about seeing Adam and Eve being portrayed by a silver-haired couple in their late 80s that made her realize: Oh. We are all Adam. We are all Eve. I am part of this story too.

That realization was not something that came to her when she sat passively watching the temple film, with its more slick presentation and attractive, young actors. The film was an identical experience every single time, while the live session could vary in interesting ways even while retaining the same verbatim script. For me, one of the most spiritual experiences I’ve ever had in the temple was when the man playing Elohim completely forgot his lines. The poor man. Words that had washed over me in drowsy waves in other temple sessions suddenly seemed precious to me, as he struggled visibly and I and the other temple patrons silently, and powerfully, prayed for him to recover. (He did.) I heard every hard-won word.

Something important is lost when we erase history in the name of efficiency and a franchised, on-brand temple experience.