VATICAN CITY (RNS) — Dante Alighieri, the medieval Italian poet, didn’t spare popes and other Catholic prelates in “Divine Comedy,” his 14th-century masterwork detailing his imaginary journey from hell to heaven via purgatory. No fewer than four pontiffs, including the then-reigning pope, Boniface VIII, are pictured in various circles of hell in the book’s “Inferno” cantos, victims of their own greed.

(Full disclosure: Dante had a personal grudge against Boniface, whom he blamed in part for his exile from the city of Florence in 1302.)

Seven centuries later, Pope Francis paid homage to Dante in an apostolic letter released Thursday (March 25), citing the poet’s criticism of “those believers — whether Popes or the ordinary faithful — who betray Christ and turn the Church into a means for advancing their own interests.”

These believers, Francis added, are accused by Dante of “ignoring the duty of charity towards the defenseless and poor, and instead idolizing power and riches.”

In “Paradiso,” the section of Dante’s poem set in heaven, popes are outnumbered by the saints who made a commitment to the poor the cornerstone of their faith. Among them is St. Francis of Assisi, Pope Francis’ namesake, who left riches and titles aside to preach to the humblest of his countrymen and founded the Franciscan order.

“Saint Francis and Dante had much in common,” Pope Francis wrote in the letter, pointing to their common efforts to make the gospel accessible to the poor and unlearned. While Francis chose to preach “among the people, in small towns and the streets of the cities,” the pope wrote, Dante chose to write his works in the vernacular, an unorthodox choice for a time when poets preferred Latin to the language spoken by the commoners.

“Another feature common to the two was their sensitivity to the beauty and worth of creation as the reflection and imprint of its Creator,” said Pope Francis, who in 2016 released an encyclical on the care of creation titled “Laudato Si’.” 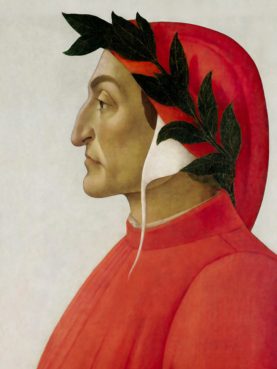 Born in the historic city of Florence in 1265, Dante was an astute and active political observer. As the papacy confronted the temporal authority of emperors, Dante sided with the popes by joining the political faction known as the Guelphs.

But despite his loyalty to the papacy, Dante belonged to a splinter group that longed for a renewal of the Catholic Church, rooted in its origins and distanced from the lavishness and fanfare of the church of his time. This group would be known as the White Guelphs, as opposed to the Black Guelphs, who instead supported the Catholic hierarchy.

Scholars still debate the Catholic identity of Dante and whether he should be considered a reactionary or progressive. In 1921 Pope Benedict XV wished to emphasize “the intimate union of Dante with this Chair of Peter.”

In Francis’ letter, Dante emerges as “a prophet of hope and a witness to the innate yearning for the infinite present in the human heart.” This doesn’t exempt the church, Francis writes, “from accepting also the prophetic criticisms uttered by the poet with regard to those charged with proclaiming the Gospel and representing, not themselves, but Christ.”

At different times and anniversaries, popes have deployed the memory of Dante to address the struggles facing the Catholic Church. Pope Paul VI, fresh from his experience of the two world wars and whose pontificate saw the beginning of the Vietnam War, saw Dante’s ideal of the unity of heaven as a message of peace.

For St. Pope John Paul II and Pope Emeritus Benedict XVI, Dante incarnated humanity’s thirst for transcendence and meaning in a world that was increasingly besotted with consumerism, materialism and secularism. Drawing from his predecessors, Francis hails the Italian poet as representative of the church’s pilgrim voyage toward faith.

That includes many pagan individuals — be they emperors or commoners — placed in Dante’s heaven, showing, according to Francis, “that no one on earth is precluded from this path.”

The pope’s letter on Dante coincides with the Feast of the Annunciation, when the Archangel Gabriel told the Virgin Mary that she would give birth to Jesus. Women, Francis pointed out, are the guiding light of “Divine Comedy.” Beatrice, Dante’s long-lost love, St. Lucy and Mary the Mother of God guide the poet in his journey.

Pope Francis encouraged teachers, scholars and especially artists to continue “to give voice, face and heart, form, color and sound to Dante’s poetry.”

The Vatican’s Pontifical Council for Culture, led by Cardinal Gianfranco Ravasi, will promote a series of events, art shows and conferences to share the message and beauty of Dante’s forever relevant masterpiece.