On April 7, after the church continued to breach rules about mask wearing and limiting attendance to 15% capacity, health inspectors and police ordered the church closed, fenced off its grounds and posted a guard.

Earlier this week, a day after 400 people protested the closure outside the fenced-off church, the Edmonton Journal reported that the church had held a clandestine in-person service at an undisclosed location during which Coates said his church had been “jailed.” In case anyone missed it, however, the church posted the service on YouTube.

Coates is a former student of the Rev. John MacArthur of Grace Community Church in Sun Valley, California, who has resisted COVID-19 restrictions there. The younger pastor has given sermons full of closely reasoned biblical interpretation on why Christians should not be ruled by government authorities. MacArthur, who taught Coates when he was a student at Grace Community’s Master’s Seminary, has cheered Coates’ stand and prayed for him while he was jailed.

GraceLife is one of a few churches in Canada that have been in the news for breaking public health orders.

This includes several churches in British Columbia’s Fraser Valley, outside of Vancouver, which brought a court challenge in March stating that restrictions on in-person gatherings unjustifiably infringed on religious freedoms.

The challenge was dismissed by the B.C. Supreme Court, which ruled that while the restrictions did infringe on the right to gather, they were justified by the province’s efforts to address “the risk of accelerated transmission of the virus, protecting the vulnerable, and maintaining the integrity of the healthcare system.”

Other protests have occurred in southern Manitoba and in southwestern Ontario, where two churches belonging to the Church of God Restoration, which has its headquarters in Greenville, Ohio, defied public health orders against in-person gatherings or size limits.

At Sunday’s protest at GraceLife, which was attended by many nonmembers, people sang hymns and prayed while being monitored by police. Several in the crowd were heard yelling that the pandemic is not real and is made up by the government.

Some in the crowd tore down portions of the fence, but it was put back up by police. The health authority said the closure will remain in effect until the church shows it is willing to follow health restrictions. 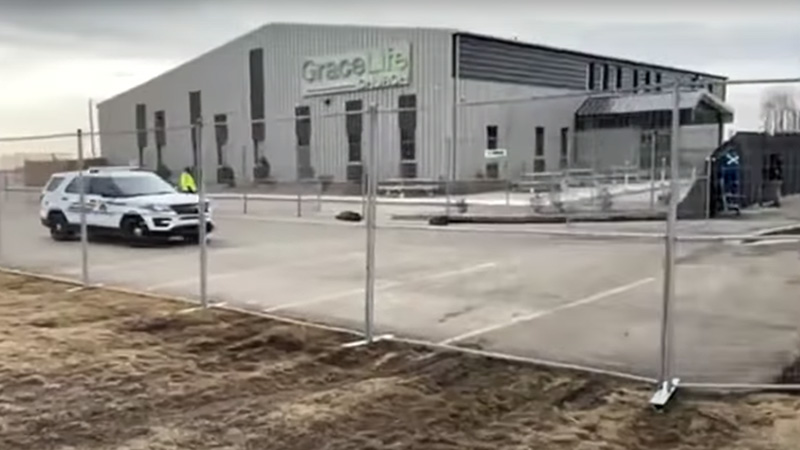 In response to the protest, Alberta’s Premier Jason Kenney said people of all faiths should take COVID-19 seriously.

“My message to people of faith in particular would be that if you believe in the sanctity of human life, please act accordingly,” he said.

“This virus is real, it’s taken the lives of 2,000 Albertans, of millions of people around the world, and we are right now in the midst of what is likely the biggest wave of infection that we’ve experienced to date.”

Other Alberta faith leaders also criticized GraceLife, including the Rev. Greg Glatz of Calgary’s Knox United Church. “I think it was long overdue and it needed to be done,” he said of the government’s decision to close the church.

Across Canada, people of faith have mostly accepted restrictions on in-person gatherings that have ranged from no in-person services to between 10% and 30% of capacity, depending on the province and the severity of the virus at any given time.

Mask-wearing is also often mandatory, and singing is usually not allowed. Drive-in services and outdoor gatherings with size limits are often permitted.

An Angus Reid Institute poll released before Easter found that 58% of Canadians who regularly attended worship services before the pandemic believed restrictions on in-person attendance were appropriate or could have been tighter.

But 39% said the restrictions were too harsh compared with other public venues such as restaurants, gyms and bars, which were granted greater leniency for opening.

Evangelicals and Catholics were most likely to take a critical view of restrictions, with nearly half in those groups saying that restrictions are unfairly harsh. That was roughly double the proportion of mainline Protestants and non-Christians who said the same.

The poll also found there is a hunger to return to in-person services, with 85% of Canadians saying they are very keen or looking forward to returning.

For Shachi Kurl, president of the Angus Reid Institute, a main finding of the survey is “people really miss and want to get back to in-person services.”

“People saw that God is not in a building, God is also inside us,” she said.