(RNS) — At 161 smallish pages, “Joe Biden and Catholicism in the United States” has the brevity, bravado and binary thinking of a good political tract. Which, in fact, is what it is. The handsome cover photo of Biden is campaign quality, and the opening declaration is boldly over the top.

That distinction may more properly belong to the 2004 election, when a majority of Catholic voters did not prefer the Catholic candidate for president. The rejection of John Kerry, the second Irish-Catholic senator from Massachusetts to run for the office, put a firm closing parenthesis around the time when politicos spoke assuredly about something called “the Catholic vote.”

Faggioli, a professor of theology and religious studies at Villanova University, still thinks there is.

Prior to his arrival in the U.S. in 2008, Faggioli spent the previous decade at the John XXIII Institute at the University of Bologna, where the renowned church historians Giuseppe Alberigo and, later, Alberto Melloni contended on a high hermeneutical level with various pontifical universities over the proper interpretation of Vatican II reforms. Faggioli’s view of Pope Francis’ papacy in relation to those of his recent predecessors bears the same contentiousness.

From these shores, Faggioli has served as a frequent commentator in European publications, interpreting American ecclesiastical and political events to audiences abroad as well as to his undergraduate students. 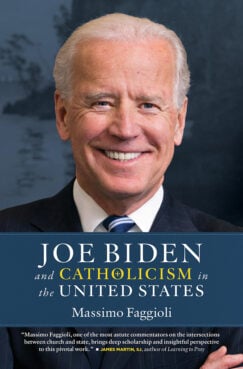 “Joe Biden and Catholicism in the United States” by Massimo Faggioli. Courtesy image

But to judge by this slim volume, Faggioli’s grasp of American religious history is astonishingly shaky. In the first paragraph, he announces that the Catholic Church in the U.S. has lately “endured internal divisions among its members like no other church and like never before in modern history.”

Really? During the Civil War, the Presbyterians and the Baptists split into separate denominations, and, within the last 10 years, the Southern Baptist Convention, the Episcopalians and the United Methodists have all suffered splits or outright schisms. By comparison, the infighting between liberal and conservative Catholics in the U.S. is an exchange of ideological spitballs.

Faggioli also claims that the Catholic Church in America has “a marked sensitivity — greater than other churches in America and elsewhere in the world — on the question of religious freedom…” Apparently he is unaware that the Baptists — from Roger Williams to the Green family of the recent Hobby Lobby case — have made religious freedom their primary concern and identifying characteristic, not least during the recent pandemic.

More disconcerting is Faggioli’s blurring of U.S. Catholic electoral history in a book supposedly dedicated to the topic. Certainly there was opposition to the faith of the first Catholic candidate for president, Al Smith, in 1928, as Faggioli points out. But he ignores the real threat that Smith’s candidacy posed to Protestants and to the nation that, they felt, their religious forebears had built: the realization that millions of Irish and other Catholic immigrants were now organized to exert real political power, as symbolized by Smith’s connections to the Tammany Hall machine.

To make matters worse, this was the Prohibition era, and Smith’s New York constituency drank and had big families — two evils that social reformers, from the Women’s Christian Temperance Union to Margaret Sanger’s birth-control movement, sought to eradicate.

In Kennedy’s postwar America, Catholics were viewed more favorably, thanks partly to the irenic pontificate of John XXIII. But Faggioli errs in saying that “the Protestant Establishment” opposed Kennedy. In 1960 that establishment was centered in the National Council of Churches, the organizational voice of mainline Protestants like theologian Reinhold Niebuhr who — contra Faggioli — supported Kennedy’s candidacy. The opposition came from a rather smaller band of anti-Catholic evangelicals organized by Billy Graham, an intimate friend of Kennedy’s opponent, Richard Nixon. 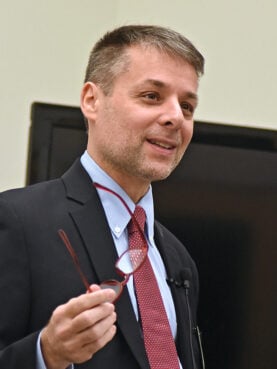 Faggioli also muddles the relationship between American Catholics and the GOP. “Beginning with the Reagan presidency,” he writes, “the shift of Catholics toward the Republican Party has also shifted their conceptions of state and government toward a more liberal, free market economic model.”

American Catholics’ embrace of free enterprise economics, however, began long before Ronald Reagan’s election. There were free enterprisers among the Catholic majorities that earlier supported Eisenhower in 1956 and Nixon in1972. More to the point: the author has yet to realize that most Catholics — like most Americans — vote party, pocketbook and personalities, rarely policy.

While the Reagan Presidency understandably attracted politically conservative Catholics, the mostly blue collar “Reagan Democrats” were the product of the Democratic Party reforms instituted in 1972 under the (George) McGovern Commission. The effect of those reforms was to eliminate the influence of union and state party leaders — many of them Catholic — and that gave preference to higher educated and suburban voters over those of the white working class.

When Faggioli turns to the current moment in American politics, he gives us a hyperbolic fantasia in which partisans of Francis’ “global left” and Biden’s “liberal America” struggle against an international conspiracy of conservative Catholic “neos” — “neo integralists,” “neo-fundamentalists” and “neo reactionaries” — who harken back to the church of Pope John Paul II and “Pope Ratzinger.”

Into this framework steps the newly elected president, a Catholic whom Faggioli claims is capable not only of uniting the country politically, but also of “rising above and overcoming the deep divisions within the American Catholic Church.”

Poor Joe. I supported him in the primaries and in November, and I wish him well with a 50/50 Senate. But the idea that a 78-year-old career politician, whose habits of devotion, like mine, are rooted to the pre-Vatican II church of the 1950s, could bond together today’s Catholics is a big ask.

It’s also a big ask for a president who, like other Catholic politicians, has been morally compromised by the party’s insistence that all Democratic officeholders support a policy of abortion-on-demand more extreme than any advanced by European political parties. Faggioli euphemistically describes Biden’s stance on abortion as “evolved” and “moderate.”

You’d never know from this book that Francis, like his immediate predecessors, has repeatedly condemned the practice of abortion — a condemnation that goes back to the earliest documents of the Christian church. Faggioli’s expectations for Biden assume, as he writes, that American presidents are religious as well as political and moral leaders. Billy Graham thought so, too, which is why he opposed Kennedy. More than 60 years later, Faggioli has no excuse for making the same mistake.

(Kenneth L. Woodward was religion editor of Newsweek from 1964 to 2002 and is currently writer-in-residence at the Lumen Christi Institute at the University of Chicago. The views expressed in this commentary do not necessarily reflect those of Religion News Service.)