LOS ANGELES (RNS) — When Rida Hamida approached a mosque with the idea of breaking Ramadan fast with a taco truck, she faced a tough sell. When it comes to the evening iftar — the dinner Muslims share after a day’s fasting in Ramadan — the Muslim population in Orange County, south of Los Angeles, is accustomed to traditional Arabic and South Asian biryani meals, with rice and meat kebabs.

But besides being immediately gratifying and accessible, Hamida thought, the taco would also bring Orange County’s Latino and Muslim communities together. So she made a proposal: She’d bring a taco truck to the mosque to serve halal tacos, while the mosque’s leader provided biryani. Then they’d see what the people would prefer.

“Everyone went to our taco truck,” said Hamida, executive director and founder of the group Latino & Muslim Unity.

More than three years later, Hamida’s #TacoTrucksatEveryMosque initiative has become a pipeline to address a host of social issues affecting marginalized communities in Southern California, from answering the U.S. census and voter registration to accessing the COVID-19 vaccination, she said.

Through Latino & Muslim Unity, Hamida, a Muslim of Palestinian descent, is working to help the area’s Muslims by bringing the vaccine directly to their mosques, where community leaders can assure the congregation that Ramadan fasting doesn’t preclude immunization during the holy month.

“We stated that if they’re able to, if they’re physically capable, they can get the vaccine even while fasting,” said Azeem Syed, a pharmacist and chair of the Islamic Shura Council of Southern California. “It does not invalidate or compromise what they’re trying to do for their faith.”

RELATED: During Ramadan in isolation, Muslims get creative to preserve community

To help put Muslims at ease, Hamida has organized a mobile vaccination unit from Care Ambulance Service to visit the Islamic Center of Santa Ana on Saturday (May 1) after sunset, for a vaccine and a halal taco iftar.

But vaccine hesitancy among Muslims extends beyond concerns over Ramadan, Hamida said, to worries about government involvement. Direct contact with congregants and others has been necessary.

Lucy Silva, who serves on the advisory board for Latino & Muslim Unity, was initially unsure of how the vaccine would affect her health. After reading more about it and seeing friends and loved ones get vaccinated, including Hamida, she decided it was safe. Plus, she wanted to travel and realized it was the best decision for the people around her.

Now, Silva is helping encourage Latino Muslims and Spanish-speaking people to receive the vaccine. Silva needed to believe in the vaccine before advocating for it. “It’s something you have to be a believer in,” she said. 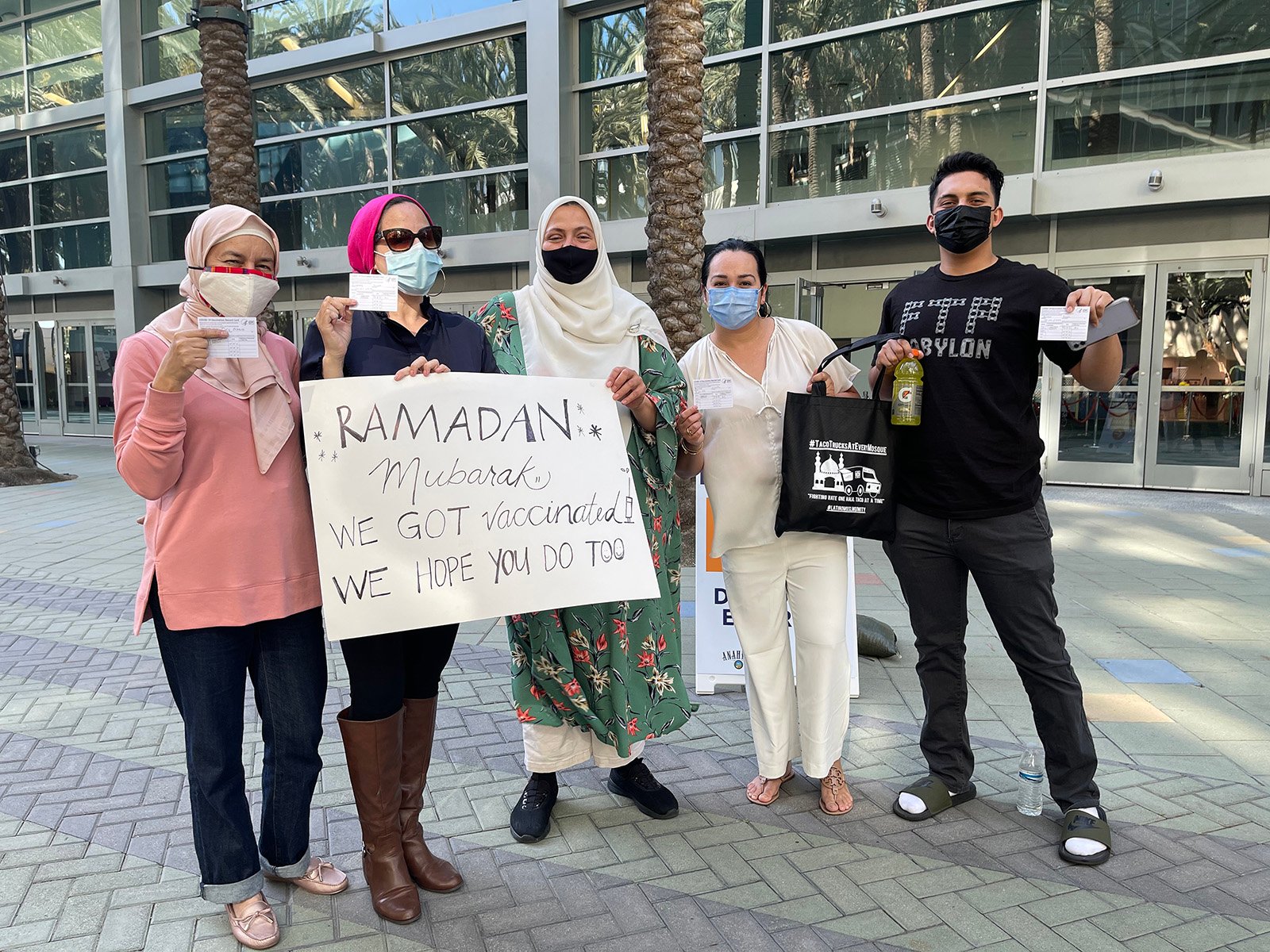 Hamida believes it will take this kind of direct contact with those who have had the shot to convince those who are hesitant. “It takes another person to get them engaged and to encourage them and to make them feel safe,” Hamida said. “This is a safe space that we’ve created. People have felt like they belong.”

The day before Ramadan began April 12, Hamida, with the help of other groups like the Islamic Shura Council, mobilized more than 100 people to get the Johnson & Johnson vaccine at the Anaheim Convention Center’s mass vaccination site.

This effort took weeks of coordination with the Orange County Health Care Agency and involved Hamida explaining why it was so important to get Muslims vaccinated before they started fasting for Ramadan. In the end, more than 100 slots were set aside for Hamida, who with other organizers, filled those spots with residents in her community.

“Each and every person we called, we educated on what to expect, reassured them this was safe and helped them understand this was an effort to end the pandemic,” Hamida said.

Now, other mobile vaccine units are happening at mosques in the county.

The Council on American-Islamic Relations in Los Angeles, the Islamic Society of Orange County and the Orange County Health Care Agency will provide 200 Moderna vaccines during tarawih prayer on Friday. County spokeswoman Molly Nichelson said the county has hosted sites with churches and other houses of faith and now with mosques.

Another combination vaccination-taco truck event, organized by Latino & Muslim Unity, will be held May 8 at the West Coast Islamic Society in Anaheim.

RELATED: At Border Mosque, a Muslim prayer is shared across the US-Mexico divide

Muslims and Latinos were organizing rallies and protesting, but they didn’t know one another, Hamida said.

But even before this, Hamida began laying the groundwork for Latino & Muslim Unity by organizing tours of the Little Arabia District, a hub for the area’s Arab Americans where Lebanese and Palestinian cuisines are prevalent. Located in Anaheim, the district was surrounded by Latino residents who had never visited or eaten there. Hamida wanted to change that.

On Saturday, Moises Moreno, who operates Tacos El Moy, will arrive early at the Islamic Center of Santa Ana to prepare the tacos that will be served that evening. Moreno has been working with the #TacoTrucksatEveryMosque ever since Hamida and Benjamin Vazquez, who co-founded the initiative, spotted his bright green taco truck parked at a street corner. They approached him and asked if he was interested in collaborating on the cause.

Moreno picks up the meat from a halal butcher and uses corn tortillas to wrap the meat with onions, cilantro and green or red salsas he prepares. The butcher hand cuts top-of-the-line beef, which doesn’t go through the grinder. The fat is cut out from the beef and chicken.

Moreno hadn’t heard of halal meat before working with the mosques; now he enjoys cooking with it. “It’s a meat that’s very tasty, very clean,” he said.

Hamida said she could have easily partnered with a taco truck owner who is Muslim or Arab, but she wanted to stick with the spirit of her initiative to unite Latinos and Muslims through food.

Now, Moreno is more aware of the county’s Muslims, which he was not familiar with before this initiative.

“It’s something very nice to be serving the community this way,” Moreno said.