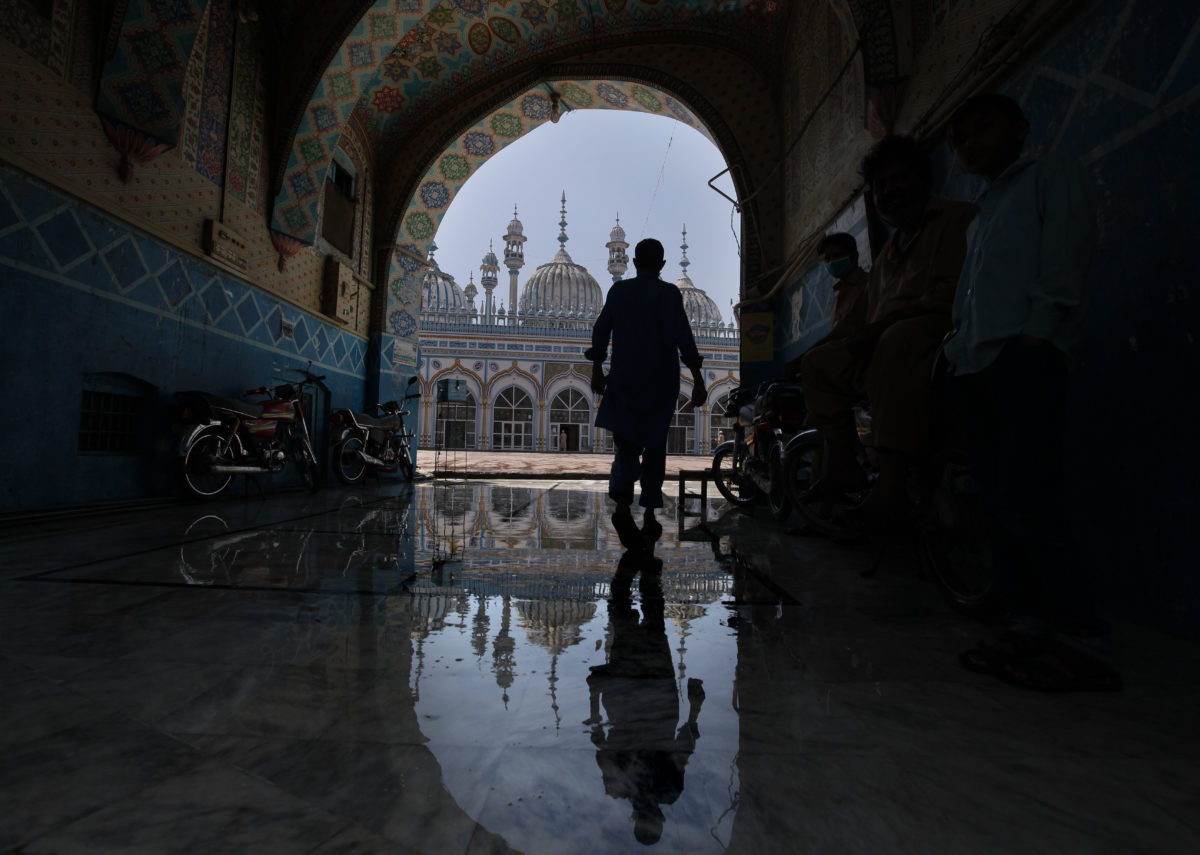 A Muslim worshipper arrives to attend noon prayers at a mosque, in Rawalpindi, Pakistan on April 21, 2020. Ramadan begins with the new moon later this week, Muslims all around the world are trying to work out how to maintain the many cherished rituals of Islam's holiest month. (AP Photo/Anjum Naveed)
April 23, 2020
Aysha Khan

(RNS) — The holy month of Ramadan, observed by fasting from dawn to dusk, has many themes: sacrifice, discipline, devotion, empathy, gratitude, generosity.

But for many Muslim communities, what defines Ramadan, which begins this week, are the moments of community: sharing platters of dates to break their fasts, the call to prayer reverberating through the halls of packed mosques, filling empty stomachs with mouthwatering nightly meals known as iftars — plates piled high with the black Muslim staple bean pie, South Asian samosas and maqluba in Arab traditions — the charitable zakat collections and the never-ending mosque fundraising pitches.

It is the coming together, many Muslims say, that builds a heightened sense of spirituality, individually and communally.

Facing tight lockdowns, curfews, mosque closures and bans on gatherings brought on a pandemic, Muslims have been forced to think outside the box to sustain traditions that attend the evening meals, and the connections the month of fasting, communal prayer and celebration brings.

“Zoom is just not cutting it,” said Koloud Tarapolsi, a Seattle-based art teacher and blogger who will mail Ramadan greeting cards to her friends this month. “The best part of iftars are the smells. Hugging and sharing that Ramadan joy, seeing all my family and the community. ... I’m going to miss that. We’re having to readjust it all.”

But Muslims, particularly those who live alone or with non-Muslim families, are seeking ways to re-create those treasured experiences without further spreading the coronavirus.

“Now feels like a time to distill life to the essence,” said Omid Safi, a Duke University professor of Islamic studies. “What is most essential, most life-giving, most life-affirming? For me, it’s prayer. It’s checking in with family, simple home-cooked meals and time for reflection. If we get to do that then, insha’Allah, we can hang on to our community and get through this together.”

For some, it will mean Zoom iftars and returning to snail mail. Others are throwing themselves into charitable giving and community service, donating masks and delivering groceries and iftars to those in need. Still others are embracing the isolation as a rare opportunity to spiritually recharge.

After seeing Instagram posts from her Jewish friends about their virtual Passover Seders and a conversation with an evangelical friend about online Easter services, Fadumo Osman, a 24-year-old programmer in Minneapolis, spent a morning putting together the website RemoteIftar.com to match people in the same time zones to share online iftars. “I wanted this to be a way to show people that we can still celebrate Ramadan in this way, and hopefully people will still feel a sense of community when they break their fast via virtual calls after a long day of reflection and solitude,” said Osman. “Ultimately, if people feel less lonely, that’s my goal.”

About 180 people from nine time zones globally have joined the site, which facilitates both single- and mixed-gender gatherings.

“I hope that it doesn’t feel like the spirit of Ramadan is lost. It’s just been translated into a space that many of us are already familiar with,” she said, pointing to the isolated Ramadan experience many college students, converts and Muslims living alone know well.

Ramadan also serves as a critical time for interfaith relations, with mosques across the country throwing their doors open to the public for iftars. Those activities, too, are being forced online: The Islamic Networks Group has organized three online interfaith iftars.

“It’s actually amazing for us, because we’ve been able to reach more people,” said ING’s executive director, Maha Elgenaidi. “In one month doing our work online only, we’ve reached four times the number of people we usually reach in a year face-to-face. We’re busier than ever.”

Laura Comstock, who leads the Muslim Students Association at Bloomsburg University in Pennsylvania, has spent the past several days writing out Ramadan greeting cards to mail to members who are stuck at home. She even expanded the project to include Twitter followers from as far as the Middle East and Australia. The group will also host Zoom iftars with coordinated menus. 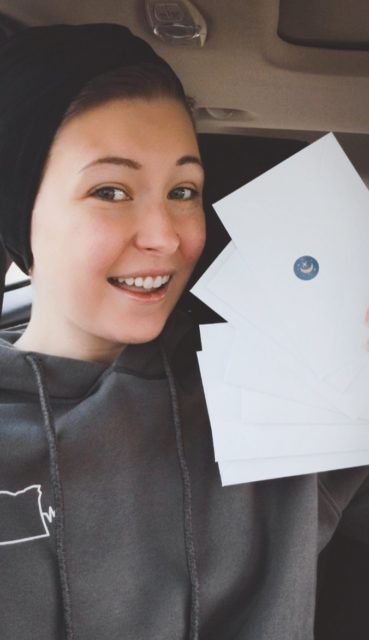 Laura Comstock holds up the letters she is mailing to friends this Ramadan. Courtesy photo

“I live alone, and so especially as a convert, I feel really isolated and separated from the Muslim community,” she said. “There are a lot of people right now who are also feeling isolated and have no idea what to do. So I thought I’d send a message that says, ‘Hey, you’re not the only one alone in this situation.’”

On Reddit, dozens of users have signed up for a Secret Santa-style Eid gift exchange. “I figure with quarantine and decreased Ramadan interaction, the Eid exchange may be one of the few methods some Muslims have of connecting with other Muslims,” the exchange’s coordinators wrote.

In Minneapolis’ Cedar-Riverside neighborhood, which has a large Muslim population, Muslim leaders worked with the city to have the Arabic call to prayer broadcast five times a day by speaker all month. The hope, officials say, is to connect those who feel isolated and encourage them to pray at home instead of seeking out their local mosque.

Some mosques, such as the Islamic Center of Greater Cincinnati, have been streaming the regular daily prayers and Friday prayers online, and will continue to do so with taraweeh, the nightly prayers Sunnis engage in during Ramadan.

Not everyone agrees that praying behind an imam remotely is the most satisfying, or doctrinally sound, workaround for the pandemic. Some Islamic scholars have recommended instead that individual households perform the prayers as best they can at home. The U.K.’s National Huffadh Association recently published a Taraweeh at Home toolkit to guide families on how to perform the prayers under lockdown.

While many are grieving the loss of in-person taraweeh, said Muslim Public Affairs Council President Salam Al-Marayati, it’s worth remembering that the Prophet Muhammad himself mostly prayed at home.

“The mosque is the center point for us, and we cherish that,” he said. “But the Quran tells us that we can go into solitude and stillness. In Western society we have diminished the value of solitude, which is so important to being human.” 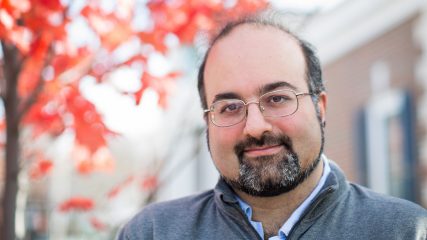 Every year, Safi, the Duke professor, leads dozens of people in educational tours of Turkey and Morocco. With those trips put on hold, he’s developed an online course exploring the writings of the 13th-century mystic poet Rumi. Three days after Safi launched it, more than 200 people had registered.

“There’s clearly a need and desire to spiritually rejuvenate at this time,” Safi said. “Everybody’s cooped up inside, and there’s only so much Netflix they can watch. They’re looking for something with heart and soul.”

He points to the medieval origins of the word “quarantine,” as a 40-day period of isolation enforced to prevent the spread of the plague, and links it to the 40-day retreats — known as arbaeen or chilla — common in Islamic history.

“There’s a very rich tradition in Islam of khalwa, or going into retreat,” Safi said. “Usually those are voluntary, and obviously this is different. But we do have 1,400 years of thinking about growing into periods of retreat and using temporary periods of social isolation as a chance to go within and do some hard work on our own heart.”

The ritual of i’tikaaf, or secluding oneself in the mosque for devotion to God, is common during the last 10 days of Ramadan. The Prophet Muhammad would also seclude himself in the mountains of Mecca regularly; it was during one of these annual retreats in the month of Ramadan that he was visited by the angel Gabriel, who read to him the first Quranic verses to be revealed.

A time of learning

Live Islamic classes, lectures and conversation and study circles have exploded online since March. Programs once restricted to a local mosque are now available for Muslims around the world to partake in, thanks to technology.

A live dashboard of such resources created by Sara Alattar and Heraa Hashmi last month offers a peek into the dizzying array of options aimed at teens, women, mothers, millennials, families and more from renowned scholars and institutions across the nation.

Alattar, who lives in Chicago, said she felt “sheer awe” at how quickly Muslim communities responded to ensure people did not lose access to the spiritual resources they relied upon. “New circumstances are an opportunity for a unique spiritual experience, although one not hosted in our mosques like usual,” she said. “We can use these community resources as a means of inspiration, knowledge and community to supplement our constant acts of worship throughout the day. We can build our own homes into mosques by the end of Ramadan.”

Some are taking advantage of the time to memorize as much of the Quran as they can. In Maryland, the Quran Institute of Dar-us-Salaam is offering small group instruction for memorization. More than 300 Ahmadi Muslims across the country have joined a separate national initiative for children to begin memorization.

“We’re very fortunate that we’ve all got our jobs, so this is turning out to be a blessing because we can spend more time at home in our worship and in dhikr, which is remembrance of God,” Elgenaidi said. “We’ll have much more time to do that by not attending iftar parties and mosque events that we often feel compelled to attend during this month.”

Related Posts
By Jamie Aten, Kent Annan
COVID tips for Christian colleges: Wear masks, social distance, pray — and watch out for tornadoes
By Lorenzo Bagnoli
For Italy’s Muslims, few places to pray and fewer places to bury COVID-19 dead
By Elizabeth E. Evans
Nuns' advice on coping with pandemic: Eat, pray for Dr. Fauci, love your neighbor
By Alan Cross
Our California church met in person. Then the police came by. And said 'well done.'
By Menachem Wecker
How the Black Plague turned the Shroud of Turin into a beloved relic