(RNS) — Next week, 45 teachers from Atalaya Elementary School in Santa Fe, New Mexico, will hop onto a two-hour professional development session on Zoom in which they will sit in silence and learn how to regulate their emotions and pay attention.

They will, in other words, be learning the skills of mindfulness meditation — the secular version of the Buddhist practice that has skyrocketed in popularity to become America’s go-to antidote for stress.

This won’t be the teachers’ first exposure to the practice, either. The teachers from Atalaya have attended one-day in-person training annually at Santa Fe’s Rio Grande Mindfulness Institute, and many, if not most, of the teachers in this elementary school have gone on to incorporate mindfulness in their classrooms.

This past year, however, as a result of the coronavirus pandemic, they are accessing mindful training online and taking advantage of multiple opportunities to meditate from the comfort of their homes.

“Switching from online, to in-person to hybrid, back to online has been super stressful,” said Kate Diaz, principal of Atalaya Elementary School, describing the past year of pandemic teaching. “This is keeping people sane in these insane times.”

Mindfulness meditation for public school teachers and their students has become a hot trend in American education. The National Center for Health Statistics, part of the Centers for Disease Control and Prevention, estimates 3.1 million U.S. children, aged 4 to 17, learned mindfulness meditation in school in 2017, the last year for which data is available. Five million practiced yoga.

Several nationwide programs, such as MindUP for Life (founded by actress Goldie Hawn), Mindful Schools, Calmer Choice and CARE for Teachers, have developed curricula for educators and classroom use. 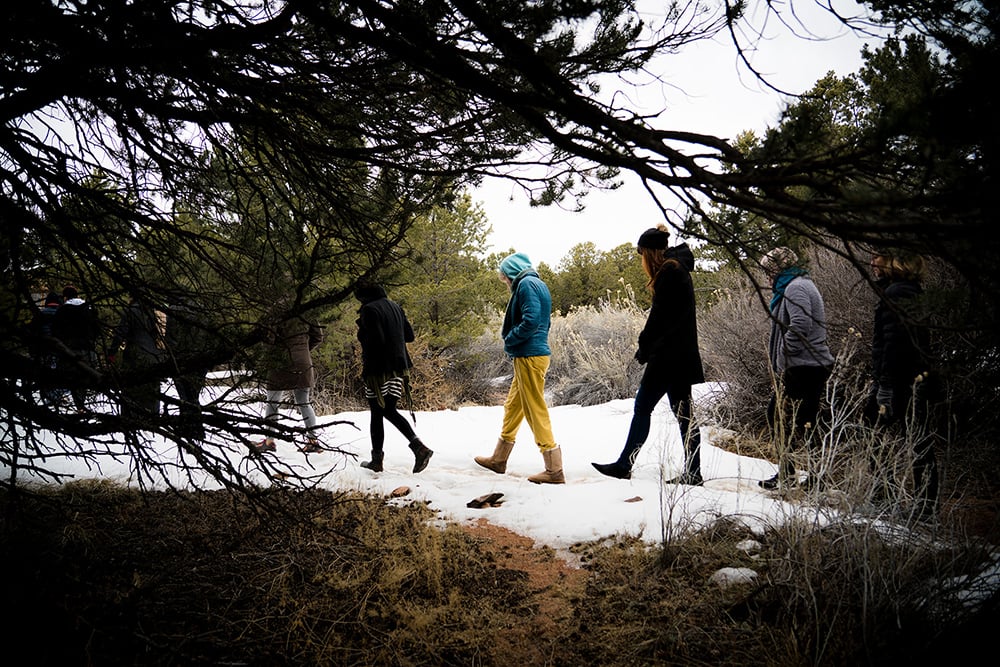 But lots of smaller outfits, such as the Rio Grande Mindfulness Institute, have retooled their offerings for a wider online world. The institute, an offshoot of Sante Fe’s Mountain Cloud Zen Center, has been offering Zoom-based mindfulness instruction for public school teachers across the state. Recently it started online lunch-hour guided meditations for public school teachers, social service providers, lawyers and other caregivers.

The online offerings have helped Rio Grande broaden and expand its reach at the very time when there’s a growing demand for self-care.

“Since the pandemic I’ve seen a lot more interest in managing stress and understanding stress, on the part of folks we mix with in our network,” said John Braman, co-director of the institute. ”It feels like the pandemic has wrought a reevaluation collectively and personally and that includes a visit to the spiritual support system people are acquiring or investigating or being curious about.”

Across the country, opposition to mindfulness, as well as well as yoga, in public school settings appears to be lessening. Alabama legislators are considering a bill that would lift a quarter-century ban on yoga and meditation in public schools. In other parts of the South, such as neighboring Georgia, the Atlanta Public Schools have partnered with The Namaste Project to bring yoga and meditation to students each week.

Many Christians, especially evangelicals, worry that public school use of mindfulness practices that originate in Buddhism (or, in the case of yoga, Hinduism) remains inherently religious and may lead children to abandon their Christian faith. They say it’s hypocritical for public schools to offer such practices while maintaining a ban on school prayer and Bible readings. 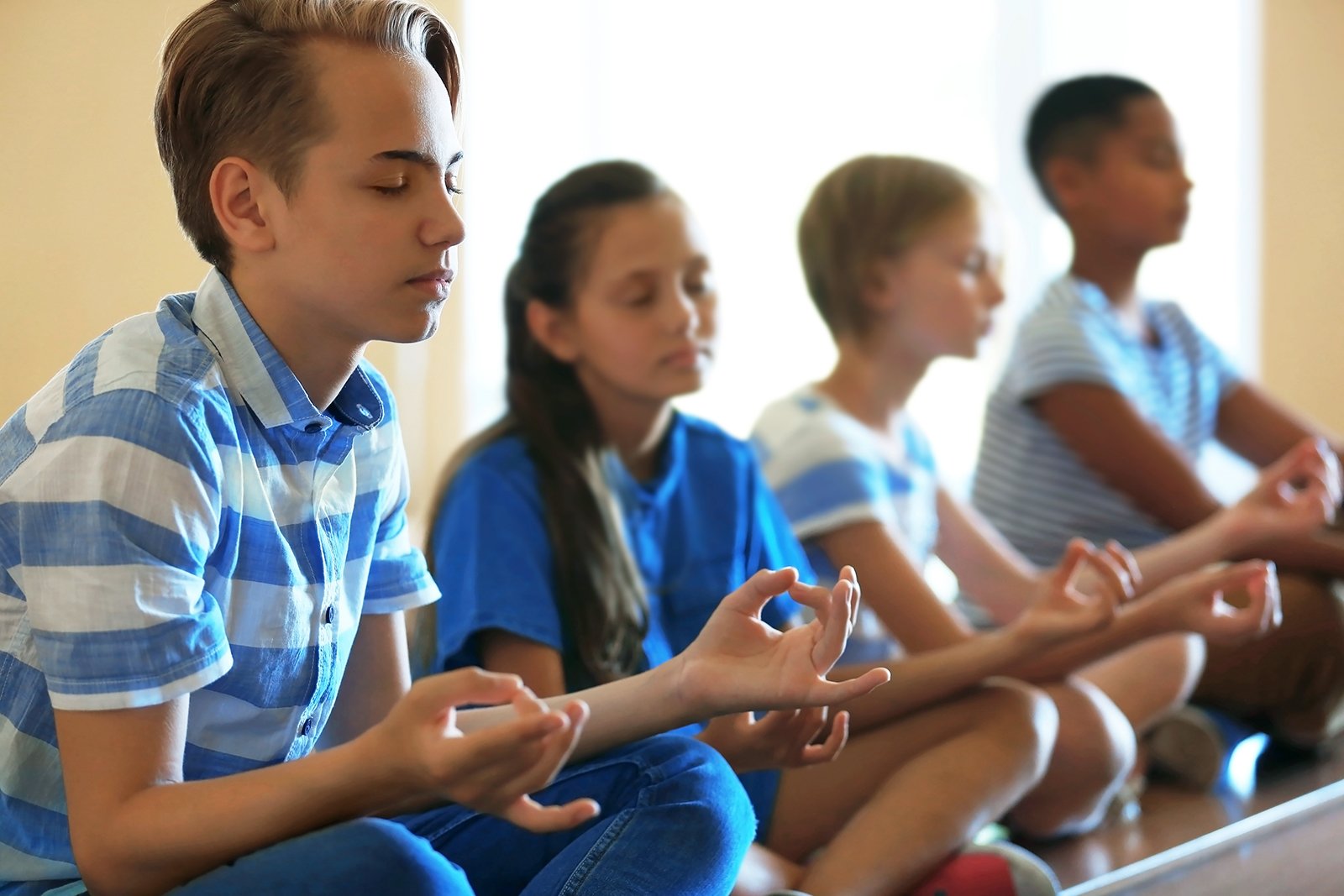 But in many places, meditation advocates have reframed practices as secular to avoid any legal challenges. At the Rio Grande Mindfulness Institute, many Buddhist symbols have been dropped. There’s no bowing, no candles, no meeting of hands in a prayer position, no zafu (meditation cushions) required.

“Being in a public school, we have to be very careful. We have to keep it secular,” said Gina Rasinski, director of fine arts for the Albuquerque Public Schools. Raskinski has offered her 140 elementary art and music teachers professional development in mindfulness at Rio Grande.

She said she has encountered no opposition.

At a recent lunch-hour guided meditation for caregivers at Rio Grande, teacher Valerie Forstman touted mindfulness as a “self-care survival kit.”  She then cited the Mayo Clinic, which recommends meditation as a way to “clear the information overload that builds up and contributes to stress.”

Before beginning the meditation, she elaborated on the emotional benefits of meditation for enhancing self-awareness, focusing on the present, reducing negative emotions and boosting creativity. She told participants to take what was useful and drop the rest.

“Find a comfortable position,” she then began. “Welcome yourself into a position of balance. Take deep breaths. Exhale any tension. Let go of static from the day. Trust yourself to this gathered silence.”

Extolling the scientifically proven benefits of mindfulness has become commonplace among the secular versions of meditation. It goes back to Jon Kabat-Zinn, who in 1979 founded the Stress Reduction Clinic at the University of Massachusetts Medical School and is credited with stripping mindfulness of its Buddhist roots and giving it a scientific sheen.

More recently, some studies show the science on meditation is not always that strong. Meta analysis of studies suggests mindfulness-based practices may be no more effective than other therapies (such as aerobic exercise or even napping) and in some cases could cause harm.

Candy Gunther Brown, a professor of religious studies at Indiana University, said mindfulness programs could benefit from an opt-in model of informed consent that gives participants an opportunity to evaluate competing scientific claims, as well as to ask questions about what has been changed to make a program secular rather than religious.

As she points out in her book, “Debating Yoga and Mindfulness in Public Schools: Reforming Secular Education or Reestablishing Religion?,” people presume meditation or yoga is either religious or secular, but it could have elements of both.

Teachers at Rio Grande are convinced their method works.

“We don’t have an agenda to convert,” said Henry Shukman, co-director of the institute. “What we do is a practice. We’ve got a great practice that’s very good for stress management and are happy to offer it where it’s urgently needed.”

Teachers and administrators at Atalaya Elementary School say it’s been a balm. Last year, at the height of the pandemic, one teacher started a 15-minute guided meditation for her colleagues on Zoom before the start of the school day.

“It’s been neat to watch people evolve with it,” said Diaz, the principal, who is a churchgoing Christian. “Eighty percent of the staff have grown into seeing and appreciating it, and 100% see how good it is for the kids. The idea of sitting, being peaceful and present and watching your breathing, it’s really powerful.” 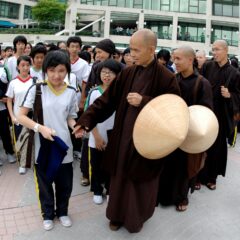 Religion Hub
Yoga versus democracy? What survey data says about spiritual Americans’ political behavior
Follow us on Facebook!
Submit your photos to RNS