WASHINGTON (RNS) — A movement is growing among conservative Catholics to deny President Joe Biden Communion during worship, but they may have to reckon with Catholic laity who disagree and a pope who has insisted the sacrament is “not a prize for the perfect.”

A subset of U.S. Catholics has spent months calling on bishops to deny Biden — the second Catholic president in U.S. history — the Eucharist because of his support for abortion rights legislation, a position they argue runs afoul of Catholic teaching that condemns abortion. It’s already happened once: Biden was reportedly denied Communion in October 2019 when he attended Mass while campaigning in South Carolina, with the priest arguing that “any public figure who advocates for abortion places himself or herself outside of church teaching.”

That incident garnered little attention, but the issue has escalated to higher echelons of the Catholic hierarchy in recent days. On Saturday (May 1), San Francisco Archbishop Salvatore Cordileone — who oversees the home archdiocese of House Speaker Nancy Pelosi, another Catholic Democrat — published a 17-page pastoral letter arguing that public officials who support abortion rights legislation should be barred from receiving the sacrament.

“Because we are dealing with public figures and public examples of cooperation in moral evil, this correction can also take the public form of exclusion from the reception of Holy Communion,” Cordileone wrote.

The U.S. Conference of Catholic Bishops is slated to discuss Communion at its annual meeting in June, and the situation may soon impact Biden directly. Bishop-elect William E. Koenig — the incoming bishop of the Diocese of Wilmington, which oversees the church where Biden often worships and where members of his family are buried — was asked over the weekend whether he would deny the president Eucharist in his diocese. The cleric said only that he is hoping to have a conversation with Biden but that, as a bishop, he is “called to teach the fullness and the beauty of the Catholic faith.” 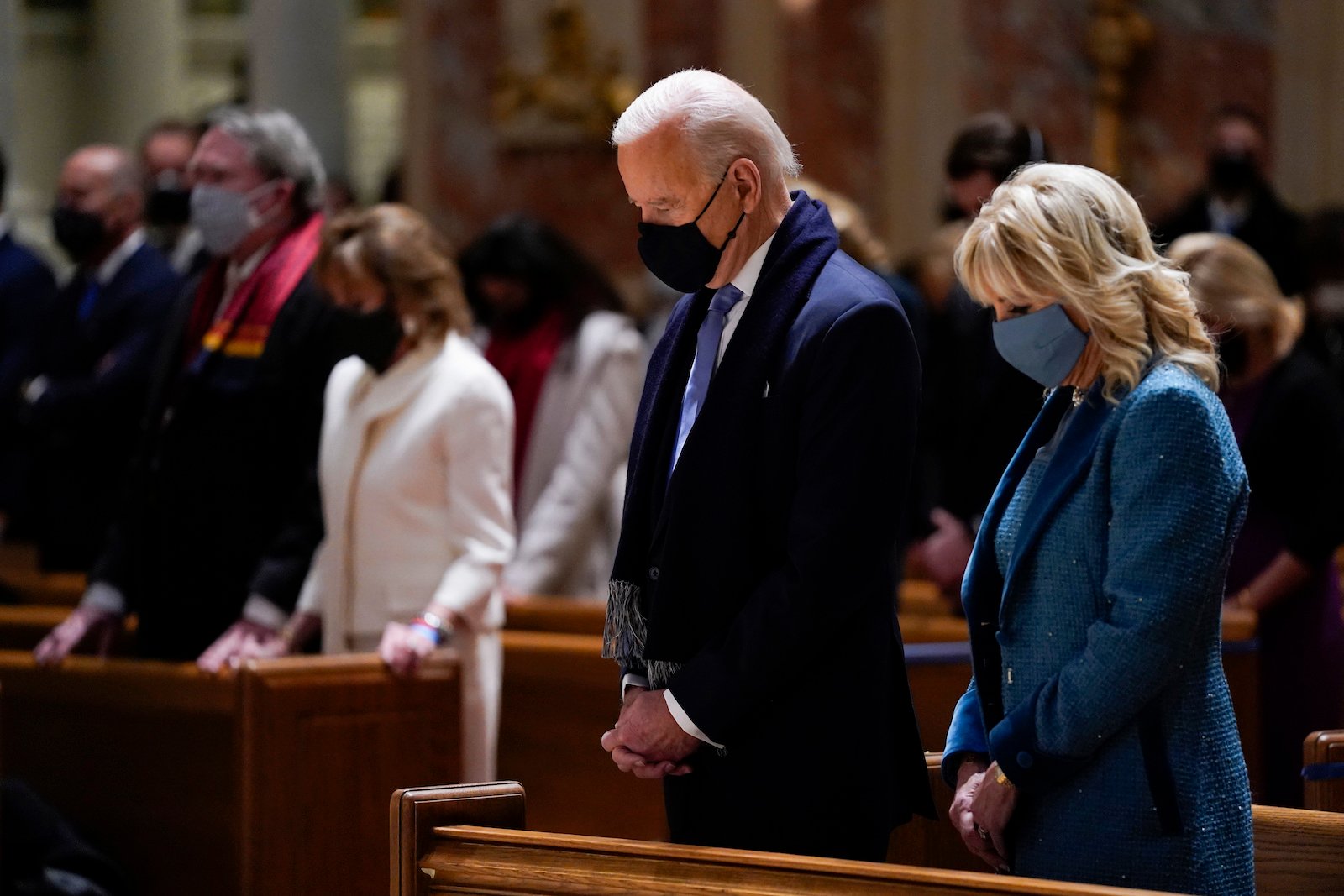 The White House declined to comment as to whether the president has spoken with Koenig or has any response to the Communion question.

But efforts to deny Communion to Biden and other Catholic politicians who back abortion rights are arguably out of step with the views of most U.S. Catholics and may eventually clash with the pope himself, who has appeared less willing to bar believers from the Eucharist.

A November 2020 poll conducted by GBAO and Catholics for Choice found broad opposition among Catholic voters when it came to denying Communion to lawmakers who support access to legal abortion, with 66% opposing it and 53% strongly opposing it. Opponents were in the majority regardless of party: 81% of Democrats, 64% of independents and 51% of Republicans rejected the idea.

Meanwhile, polling conducted by multiple sources — ranging from Pew Research to conservative Catholic media outlet EWTN — indicates most Catholics in the U.S. believe abortion should be legal in all or most cases.

“The laity understand things the hierarchy don’t: Denying someone Communion is the spiritual equivalent of starving them,” Jamie L. Manson, head of Catholics for Choice, told Religion News Service.

“It’s just a step too far by the bishops to use the sacrament as a punishment and to weaponize it as a political tool. … It shows a lack of faith in the power of the sacraments to reduce it in that way, to use it as a tool of intimidation. I don’t think there could be anything more antithetical to Christianity, to Jesus’ message.”

While the Vatican has not wavered from its long-standing condemnation of abortion, it’s been more fluid when it comes to offering Communion to politicians who hold views that differ from Catholic teaching, depending more on the cleric administering the sacrament than the positions of the politicians receiving it.

St. John Paul II gave Communion to U.K. Prime Minister Tony Blair and his wife, both supporters of abortion rights, and in 2001 administered the Eucharist to the progressive Italian politician Francesco Rutelli, who pushed for abortion rights legislation in Italy. 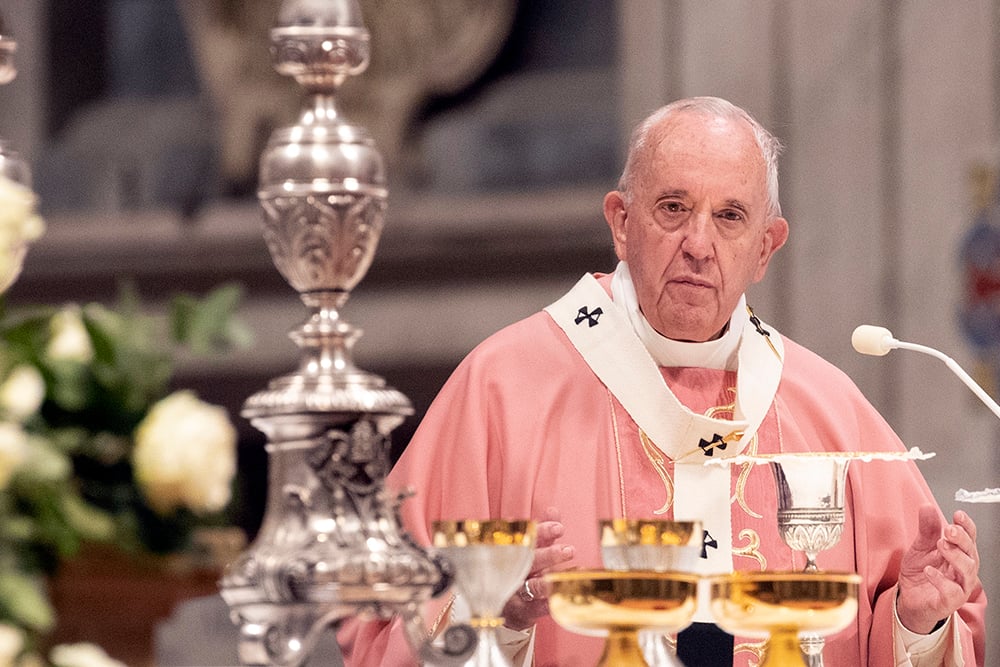 Pope Francis celebrates a Mass for the Philippine community of Rome, in St. Peter’s Basilica at the Vatican, on Dec. 15, 2019. (AP Photo/Alessandra Tarantino)

Pope Francis has not publicly weighed in on the Communion question in the U.S., but an overview of his writing and actions suggests a more inclusive posture. In his 2013 apostolic exhortation “The Joy of the Gospel,” Francis wrote “the Eucharist, although it is the fullness of sacramental life, is not a prize for the perfect but a powerful medicine and nourishment for the weak.”

The pope called for “prudence and boldness” when considering the administration of the sacraments, warning against clergy who “act as arbiters of grace rather than its facilitators.” Churches shouldn’t operate as “a tollhouse,” he suggested, but as a space with open doors “where there is place for everyone.”

Francis struck a similar tone in two 2016 documents: His apostolic exhortation “Amoris Laetitia” opened the door for divorced and remarried Catholics to receive Communion after talking to their priest, and his apostolic letter “Midericordia et Misera” allowed priests to absolve women and doctors who procured an abortion.

Francis himself rarely administers Communion directly when presiding over Mass, generally allowing others to do so. When he was inaugurated as pope in 2013 at the Vatican, he officiated the Mass but did not personally administer Communion to Biden or Pelosi, who were present.

But Francis’ posture remains markedly different from, say, the Vatican during the 2004 U.S. presidential election, when some U.S. bishops suggested denying Communion to Democratic candidate John Kerry for holding views contrary to Catholic teaching in matters of life and marriage. Then-Cardinal Joseph Ratzinger — later Pope Benedict XVI — sent a letter in July of that year to Theodore McCarrick, a since-defrocked cardinal who oversaw the Archdiocese of Washington at the time, containing instructions on administering Communion. 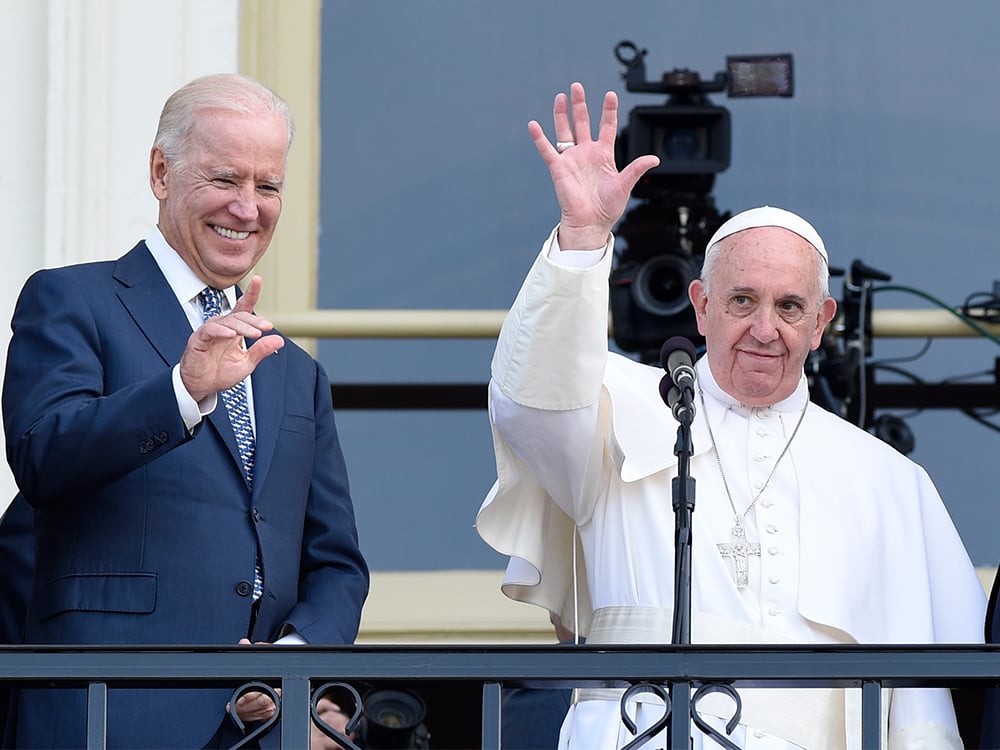 Pope Francis, right, flanked by Vice President Joe Biden, waves to the crowd in Washington on Sept. 24, 2015, as they stand on the Speaker’s Balcony on Capitol Hill, after the pope addressed a joint meeting of Congress inside. (AP Photo/Susan Walsh)

“Regarding the grave sin of abortion or euthanasia, when a person’s formal cooperation becomes manifest (understood, in the case of a Catholic politician, as his consistently campaigning and voting for permissive abortion and euthanasia laws), his Pastor should meet with him, instructing him about the Church’s teaching, informing him that he is not to present himself for Holy Communion until he brings to an end the objective situation of sin, and warning him that he will otherwise be denied the Eucharist,” Ratzinger, then head of the Vatican’s Congregation for the Doctrine of the Faith, wrote.

Years later, in 2007, as Pope Benedict, he suggested Catholic politicians who support abortion rights could be at risk of excommunication, adding “the killing of an innocent child is incompatible with receiving Communion, which is receiving the body of Christ.”

Yet even Benedict presided over services in 2008 during a visit to the U.S. where Pelosi, Rudy Giuliani and even Kerry were able to receive Communion — albeit not directly from the pope.

As for U.S. prelates, prevailing guidance on the issue rests with existing Catholic polity and a 2004 USCCB document titled “Catholics in Political Life,” which reaffirms that individual bishops decide whether to administer the Eucharist to Catholic politicians who support abortion rights.

That means Biden will likely continue receiving Communion in Washington for now. The Archdiocese of Washington did not respond to repeated inquiries this week regarding Biden and Communion, but Cardinal Wilton Gregory — the Washington cleric who participated in one of Biden’s inauguration ceremonies — explained his decision to continue offering Biden the Eucharist during a December interview with RNS.

“I don’t want to begin a relationship with (Biden) based on a penalty,” he said.

The cardinal later added: “I don’t want to go to the table with a gun on the table first.” 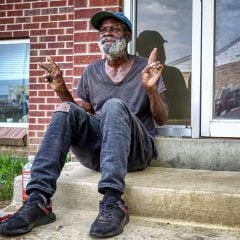 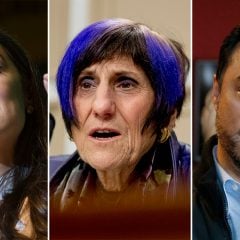