VATICAN CITY (RNS) — On Sunday (May 16), Pope Francis will celebrate a Mass in Rome for Myanmar Catholics on the Feast of the Ascension, underlining his religious and diplomatic efforts to promote peace and reconciliation in the troubled Southeast Asian country.

Democratic protests have sparked all over the country, with some Catholics taking center stage in opposing the violence of the armed forces. Almost 1,000 people have reportedly been killed in Myanmar since the military coup and many more have been displaced by raids and airstrikes.

“Every dictatorship must find someone to oppress. So we always have a target on our back,” said the Rev. Maurice Moe Aung of the Missionaries of Faith, speaking online from Myanmar with a pool of Vatican journalists.

“Probably, if this difficult situation continues and as it’s already happening in Buddhist monasteries, the military forces will also enter Catholic churches to control the situation,” he added.

Aung said protests continue all over the country, with many arrests putting further pressure on a population already struggling due to the pandemic and a crumbling economy. According to the missionary, time is running out for the international community to intervene and prevent further bloodshed in Myanmar.

“The international community must lend its voice. It must be stronger and more determined. We cannot wait!” Aung said, adding that Southeast Asia has had its share of turmoil since the Khmer Rouge in Cambodia, the war in Vietnam and the Japanese invasions.

“Now it’s up to Myanmar,” he said, “so we must act quickly or there will be many, many more deaths.”

The United Nations has already intervened by asking for an immediate halt to the violence and restoration of the democratic process. Pope Francis and the local Catholic bishops have also been outspoken in promoting reconciliation in the country. 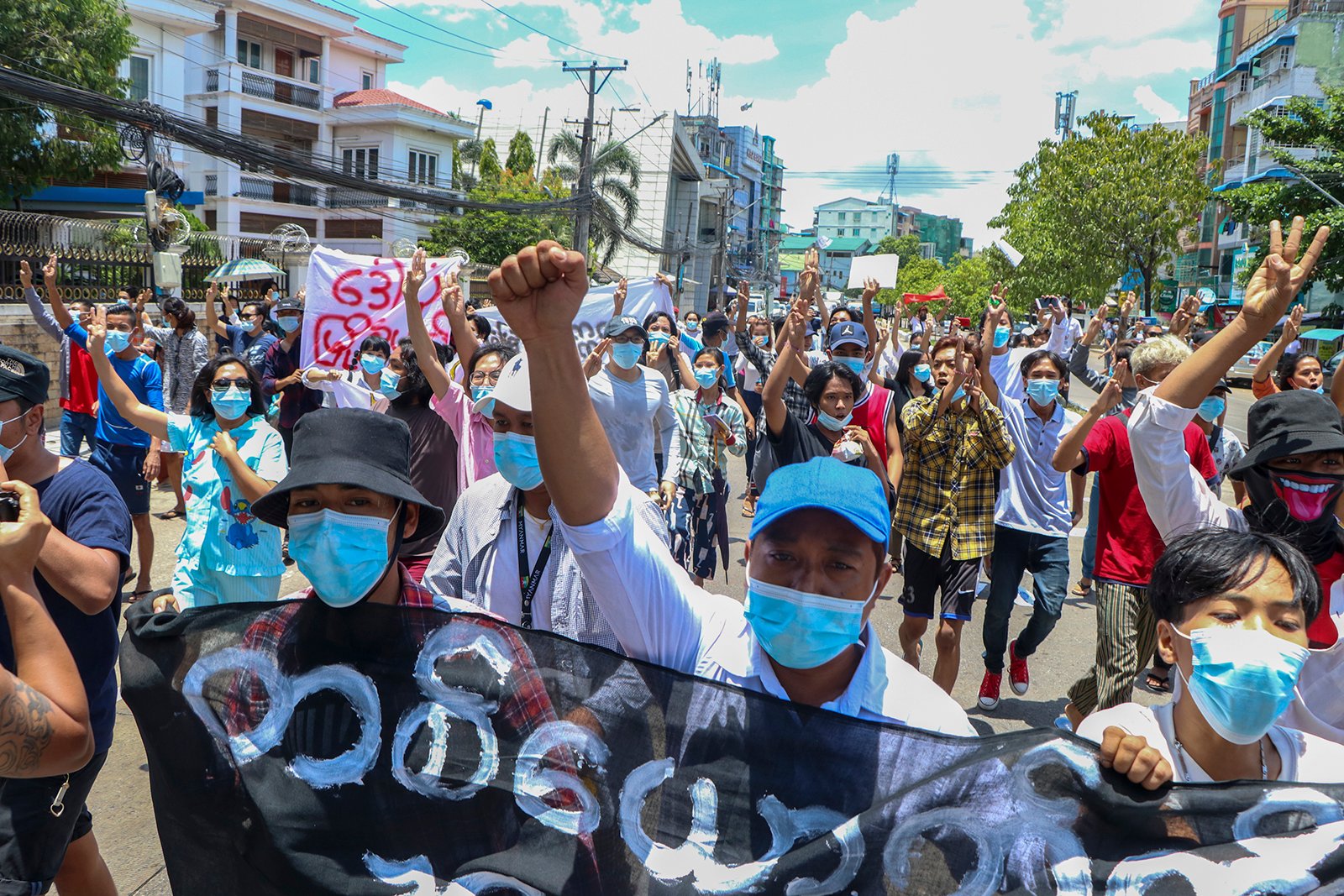 Anti-coup protesters march during a demonstration in Yangon, Myanmar, on May 12, 2021. One hundred days after their takeover, Myanmar’s ruling generals maintain just the pretense of control. The illusion is sustained mainly by partially successful efforts to shut down independent media and to keep the streets clear of large demonstrations by employing lethal force. (AP Photo)

The pope made his first appeal shortly after the coup, offering his prayer for leaders in the country so they may strive toward “the common good, promoting social justice and national stability, for a harmonious, democratic coexistence.”

Since then, Francis has often mentioned his closeness to the people of Myanmar, in particular its young people and clergy. Christians represent roughly 5% of the country’s population, which is 89% Buddhist, followed by a Muslim minority. Its Catholic population is spread over 16 dioceses, and Francis appointed the first red hat in Myanmar to Cardinal Charles Maung Bo.

Catholics have supported the peaceful protests and urged the military to adopt nonviolent measures and dialogue. In a public statement on Feb. 21, the bishops’ conference in Myanmar joined other religious leaders in “pleading for restraint in the streets and a return to dialogue.”

“The heartrending scenes of youth dying in the streets wound the conscience of a nation,” they wrote. “Let not its sacred ground be soaked in fraternal blood. Sadness of parents burying their children has to stop. Mothers’ tears are never a blessing to any nation.”

Sister Ann Rose Nu Tawng of Myitkyina, the capital of the most northern region of Myanmar, made headlines in late February when she knelt before the armed forces to protect protesters, a gesture praised both by Bo and Pope Francis.

“I too kneel on the streets of Myanmar and say: Stop the violence! I too reach out my arms and say: May dialogue prevail!” the pope said during his general audience March 17. 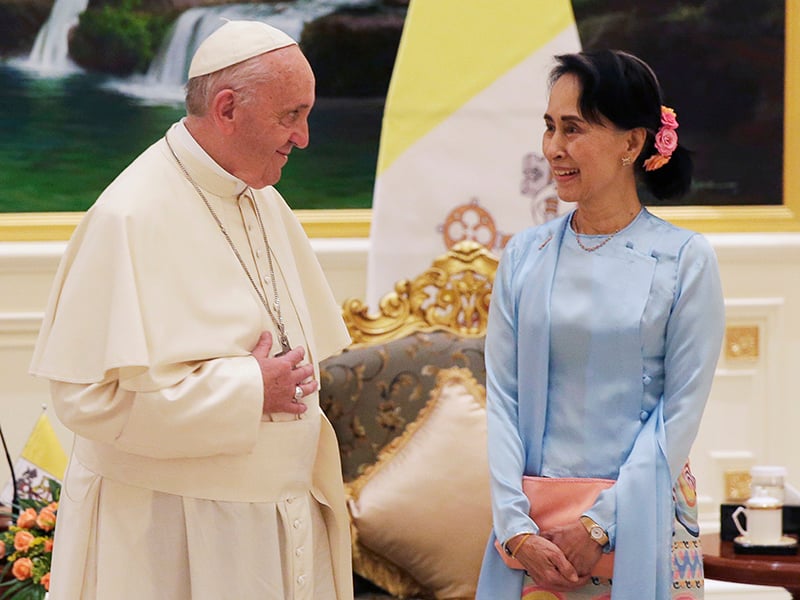 “His presence was important because we are viewed as the religion of the foreigners and we weren’t welcomed even by the Buddhists,” he added.

Things changed after the pope’s apostolic visit, he said, but the military coup has put a halt to progress in the country and limited the activities of religious groups. Pope Francis’ celebration of Mass on Sunday is the latest effort from the Vatican to draw global attention to the growing tensions in Myanmar.

Starting in late 2016, the Myanmar military began a violent crackdown on the Rohingya Muslims, an ethnic minority in the country. According to the United Nations, over 25,000 Rohingya have died as of 2018 in what it described as “a textbook example of ethnic cleansing.”

When Pope Francis visited the country he was asked by Bo not to mention the word Rohingya, Aung said, “given the delicacy of the situation which could have affected the entire Catholic community.” The pope refrained from using the term in Myanmar but addressed the matter directly during the second leg of his trip.

“In the name of everyone, of those who have persecuted you, of those who have done you harm, above all for the indifference of the world, I ask forgiveness,” the pope said in a meeting with Rohingya refugees in Dhaka, Bangladesh, on Dec.1.

“The situation of the Rohingya has remained the same,” Aung said. “They are trying to get them out of the country,” he added, noting that the conflict is rooted in the animosity between the local Buddhist and Muslim communities.

Looming over the situation in Myanmar is China, which has several vested economic interests in the country and has been accused of backing the military junta. In April, Bo released a statement accusing the Chinese Communist Party of covering up the COVID-19 pandemic.

“It is the repression, the lies and the corruption of the CCP that are responsible,” he said. The cardinal also openly condemned the CCP’s “campaign against religion,” which has led to the destruction of religious sites and “the incarceration of at least 1 million Uyghur Muslims in concentration camps.”

This was the first and only time the cardinal openly criticized China, Aung said. “After all, we promote nonviolence. We don’t have much more say than that.”

Pope Francis and the Vatican have been wary of openly criticizing China, the home of roughly 12 million Catholics. The Vatican has brokered a provisional deal with Beijing regulating the appointment of bishops, which detractors believe will put a muzzle on the pope’s ability to hold China accountable.