The sudden downpour caught me unaware. But even as it drenched my shoes, I couldn’t help smiling. Three days ago, seminary president Al Mohler compared the growing threat of women preachers in the Southern Baptist Convention to a coming rainstorm. “At first, there is only a small cloud,” he wrote. “Soon thereafter, here comes the downpour. Well, here it comes.”

As I watched the water stream around my feet, overflowing dips in the sidewalk and flooding the flower beds, I thought about Mohler’s words. He’s partly right. In terms of the SBC stance on women preaching, a downpour is coming — just not from the direction Mohler thinks.

Mohler’s recent article targets the ordination of three women by the SBC-affiliated Saddleback Church, a California megachurch led by “Purpose Driven Life” author and pastor Rick Warren. The recognition of these women as pastors (the article makes crystal clear) violates the 2000 Baptist Faith & Message. But why does the SBC confession of faith so explicitly reject women as preachers and pastors? If no ordination theology exists for Baptists, why does the ordination of women by one of its largest churches matter? Why does the SBC even care?

It matters, Mohler explains, because of the slippery slope of liberal theology. In opposition to more than 2,000 years of biblical interpretation (or so the SBC story goes), mid-20th-century liberal theologians undermined scriptural authority and fueled “revisionist arguments” for women preaching. Ironically, Mohler argues, their “headlong” rush for equality became their “kiss of death,” when women so overran mainline churches that men literally ran away. “The result,” Mohler writes, “has been the feminization of liberal Protestantism. Put bluntly, there just aren’t that many males left. Actually, there are not that many people left in those churches.” 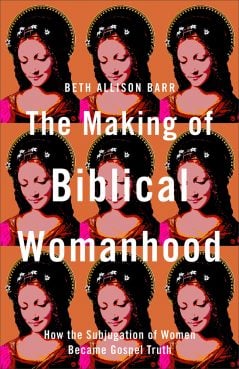 “The Making of Biblical Womanhood: How the Subjugation of Women Became Gospel Truth.” Courtesy image

In contrast, the SBC holds firm the line on “biblical orthodoxy.” Women are divinely called to supportive roles focused on husband and family. Only men are called as pastors (of any rank) and preachers (regardless of official position). “A pastor,” Mohler writes, “is a pastor and ‘the office of pastor is limited to men as qualified by Scripture.’”

It is from the direction of liberal theology, I think, that Mohler sees the storm clouds gathering once again for the SBC — from those whom he believes have discounted the authority of Scripture as well as feminists who argue “biblical authors were flat wrong.”

But I think Mohler is wrong. A narrow understanding of church history parallels the narrow vision the SBC has for women, and this limits Mohler’s perspective.

The storm clouds are not gathering “out there” and threatening to blow his way — they have been gathering for a century at least right within his own denomination.

Take, for example, a section from my recent book “The Making of Biblical Womanhood.” It highlights what Mohler cannot see: a strong history of faithful evangelical women serving in public ministry.

“Historically, women have flourished as leaders, teachers, and preachers — even in the evangelical world. Instead of opposing women as preachers and teachers, many eighteenth- and nineteenth-century evangelicals did the opposite — they supported women in public ministry…

Historian Bettye Collier-Thomas has found women actively preaching and leading in denominations like the African Methodist Episcopal (AME) Church, AME Zion Church, Baptist Church, Colored Methodist Episcopal Church, and in Holiness movements. She published a collection of thirty-eight sermons by fourteen Black, female preachers who worked in the US between 1850 and 1979 — showing, again, a continuous thread of women as leaders, teachers, and preachers long before the rise of evangelical feminism.

The title of Collier-Thomas’s book is brilliant: “Daughters of Thunder: Black Women Preachers and Their Sermons,” 1850-1979. She discusses women who paved the way, like Mary J. Small (ordained an elder in 1898 in the AME Zion Church), as well as twentieth-century preachers like Texas Baptist Ella Eugene Whitfield, who became a missionary for the Woman’s Convention Auxiliary national Baptist Convention and, in 1911, preached almost five hundred sermons and visited over one thousand homes and churches. (To me, the public nature and widespread visibility of Whitfield’s ministry in the early twentieth century sounds like a precursor to the public ministry of her later Texas Baptist sister Beth Moore.) The voices of Black women thundered from pulpits, just like the voices of their brothers in Christ did. Baptist minister Samuel W. Bacote praised Whitfield’s public presence as ‘a woman of untiring zeal and commanding appearance.’ ‘She can hold an audience indefinitely,’ he wrote, ‘by the intensity of her earnestness and the clearness and appropriateness of her well-chosen words. The utility of her subjects and the excellence of her delivery have rendered her extremely popular as a public speaker.’” (179-180)

Most of the female preachers discussed by Collier-Thomas embraced their ministry long before the advent of second wave feminism. So how are we to account for these women? Are they theological liberals who flouted scriptural authority? Or are they simply women of faith who believed God called them to preach?

I watched as Mohler tweeted a quote from John Broadus on Mother’s Day, defending the historic practice of barring women from the pulpit. As Broadus wrote in 1880, “Now it does not need to be urged that these two passages from the Apostle Paul do definitely and strongly forbid that women shall speak in mixed public assemblies. No one can afford to question that such is the most obvious meaning of the apostle’s command.”

As I read Broadus’ words, repeated by Mohler, I couldn’t help but think about another passage from “The Making of Biblical Womanhood”: “What if we stopped forgetting our past and remembered that women — just like us — preached their way through the landscape of Christian history? What if we remembered that we are surrounded by a cloud of female witnesses and that we will never stand alone?” (217) 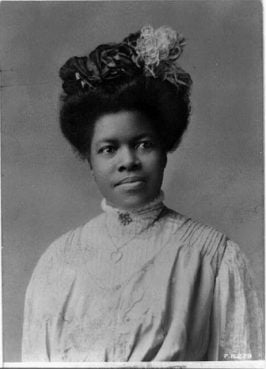 Nannie Helen Burroughs, circa 1909. Photo by the Rotograph Co./LOC/Creative Commons

What if we stopped forgetting women like Nannie Helen Burroughs? I just learned about her recently, from a fellow Baptist historian. Born to a formerly enslaved mother and a Black Baptist pastor father, Burroughs worked during the early 1900s for the National Baptist Convention (a primarily Black Baptist denomination) in Louisville, Kentucky. She delivered a bold speech at the 1900 National Baptist Convention, calling for pastors to support women as missionary leaders.

As she proclaimed to all the Baptist pastors in her audience, “It has ever been from the time of Miriam, that most remarkable woman … down to the courageous women that in very recent years have carried the Gospel into Thibet and Africa and proclaimed and taught the truth where no man has been allowed to enter. Surely, women somehow have had a very important part in the work of saving this redeemed earth.”

I find it striking that Burroughs, who was clearly speaking authoritatively in the type of “mixed public assembly” that Broadus condemned, was not only a contemporary (at least for a few years) of Broadus but lived in the same town. Broadus, a former slaveholder and Confederate chaplain, served as president of Southern Baptist Theological Seminary in Louisville just a few years prior to Burroughs working for the NBC. Both were Baptist. I imagine both ascribed to scriptural authority.

But while Burroughs saw the gospel as a liberating force for women and fought for women’s equality, Broadus did the opposite. Burroughs was a Black woman who also fought for racial equality; Broadus, again, was the opposite. He was a white man who once fought for slavery. I find it rather telling Mohler chose to quote Broadus, using him as proof Baptists do not support preaching women even as Burroughs proclaimed women “have had a very important part in the work of saving this redeemed earth.”

Yes, Al Mohler, a storm is coming. But I don’t think it is coming from radical liberals who have fallen down the slippery slope. I think it is coming from the great cloud of female witnesses who have stood firm in their belief God has called them to preach the gospel of Jesus — women like Mary J. Small, Ella Eugene Whitfield and even Addie Davis. It is coming from ordinary evangelical women like me who believe God calls women to preach — not because we have forsaken the authority of Scripture, but rather because we cling so strongly to it. 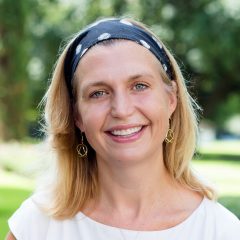 It is time, I think, for some rain.

(Beth Allison Barr is the author of “The Making of Biblical Womanhood” and professor of history at Baylor University. The views expressed in this commentary do not necessarily reflect those of Religion News Service.)