(RNS) — Emily Smith didn’t realize there was such a divide between faith and science for many Christians.

Smith’s parents led worship at a charismatic church — “just a fantastic experience and upbringing” — and she married a Baptist pastor. She studied science and medicine because she dreamed of becoming a medical missionary. She volunteered in the kitchen and made balloon animals aboard Mercy Ships in Honduras while in college. Eventually, she became an epidemiologist.

For her, epidemiology was a natural way to live out her Christian beliefs, loving her neighbor the way Jesus commanded and caring for the most vulnerable — like the “good Samaritan” of Jesus’ parable did when he stopped to care for an injured man while others passed by.

“My first (Facebook) post on faith was about the good Samaritan because I see the field of epidemiology as that: Quantify who’s the vulnerable, and we don’t walk by,” said Smith, now 40 and assistant professor of epidemiology at Baylor University in Waco, Texas.

Then came COVID-19, a time when she thought Christians — with their commitment to “love thy neighbor” — might shine.

Smith started Friendly Neighbor Epidemiologist, a Facebook page, in March 2020 to share information about the novel coronavirus and answer questions she was hearing from her neighbors and friends. Yes, COVID-19 was something they should pay attention to. No, they didn’t need to hoard toilet paper.

Since then, the page, written in Smith’s friendly, informational voice, has grown to more than 96,000 followers. About half are evangelical Christians, she said. 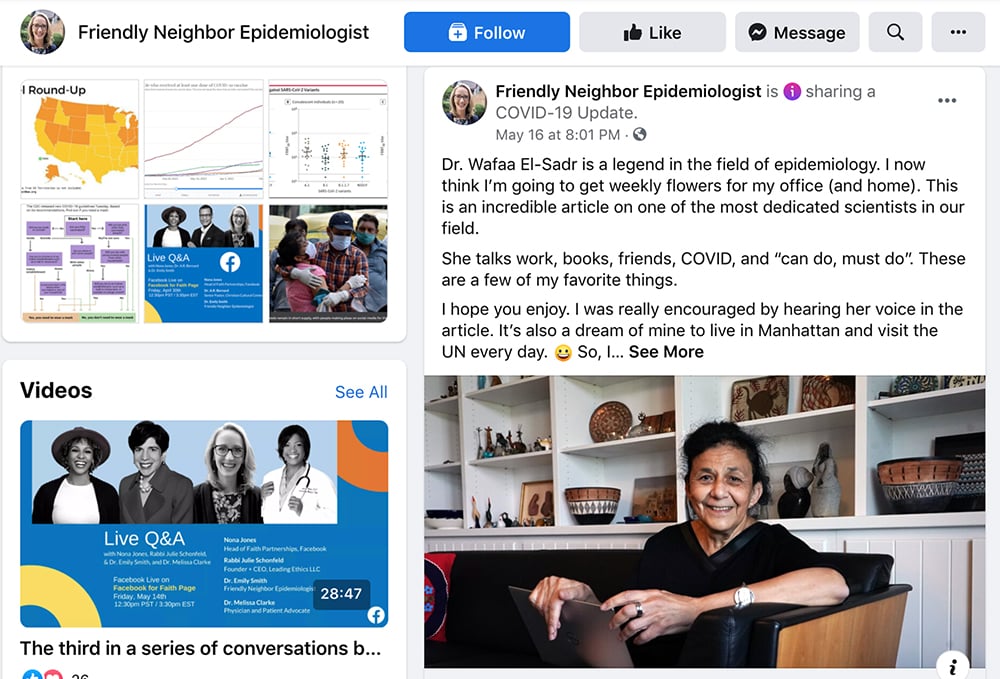 But threats and pushback have also followed — all but one from her fellow Christians. She has been sent pictures of guns, handwritten letters about the “mark of the beast” and the End Times, messages telling her she should leave the preaching to her husband or telling her she is going to hell.

That’s nothing compared to what many others have put up with for much longer, she said.

But, the epidemiologist added, “Every time I would talk about faith over fear and masking as a way to show our freedom and allegiance to Jesus, they would come.”

At first, Smith was answering questions on Facebook about whether face masks work and whether churches should continue to meet in person.

Over the summer, though, she saw some Christians begin to shift the narrative in ways that were alarmingly racist, blaming the spread of COVID-19 on Black Lives Matter protests, immigrants arriving at the U.S.-Mexico border and Asian Americans. None of the data supported that, she posted on the Friendly Neighbor Epidemiologist page.

She heard arguments that masking was a sign of fear and not of faith. She kept pointing back to Galatians 5, which says while Christians are called to be free, they are to use that freedom to “serve one another humbly in love.”

“I think wearing a mask and getting a vaccine, full of faith, displays my lack of fear more than going to an unmasked church service just to prove something,” she said.

Especially troubling to her were people who refused to wear masks, especially at large gatherings hosted by evangelical Christian leaders, like Franklin Graham’s Prayer March 2020 in Washington, D.C., and services at John MacArthur’s Grace Community Church in California.

“I was hearing all of this stuff, and I was uncomfortable, because that’s just not Jesus to me or ‘love thy neighbor,’” she said. 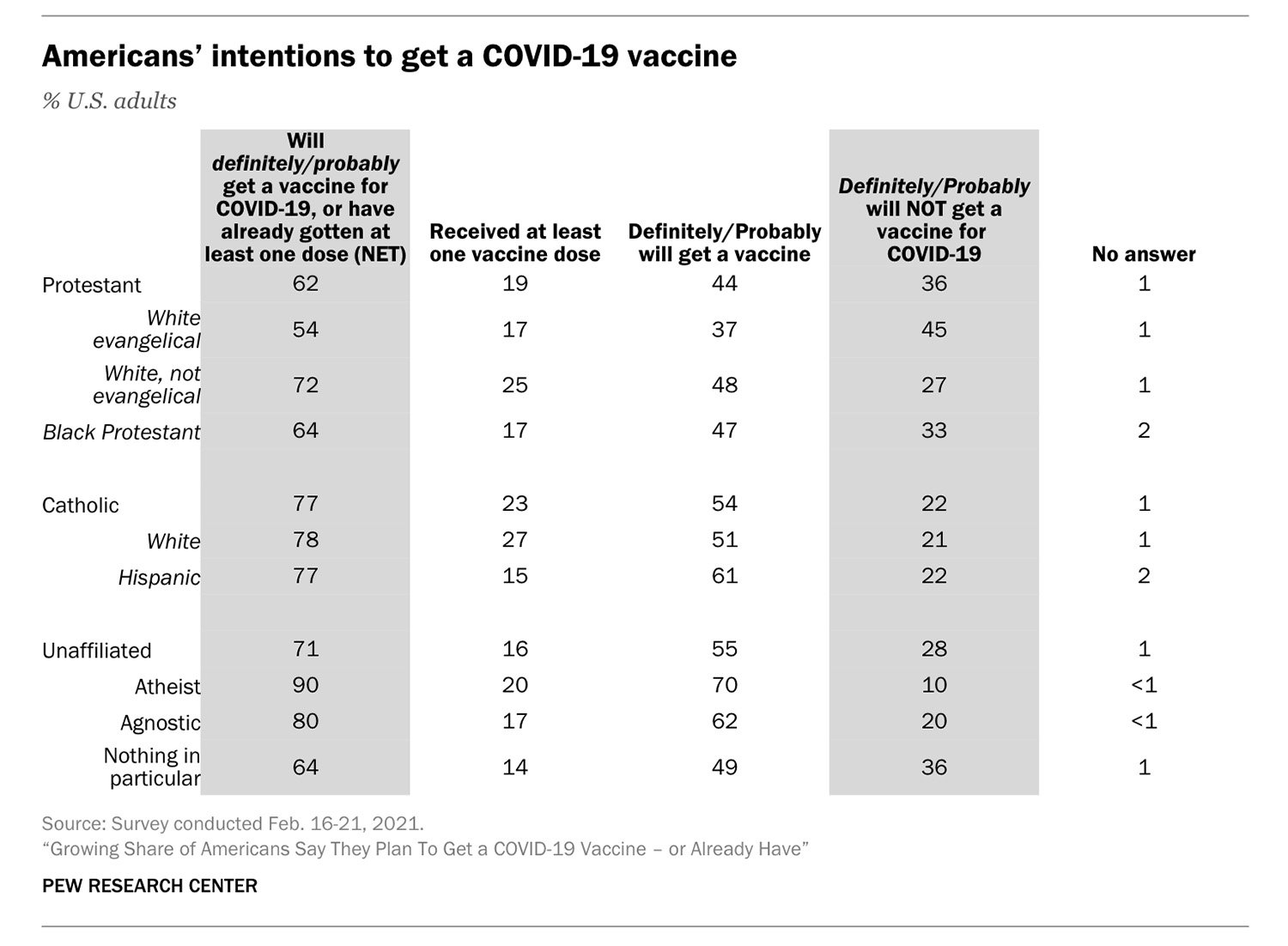 “Americans’ intentions to get a COVID-19 vaccine.” Graphic courtesy of Pew Research Center

These days, Smith is posting a lot about the COVID-19 vaccines, as polling by the Pew Research Center shows 45% of white evangelicals say they definitely or probably will not get vaccinated against COVID-19, a higher number than any other religious group.

She’s not the only Christian urging evangelicals to get vaccinated.

Curtis Chang, a faculty member at Duke Divinity School and senior fellow at Fuller Theological Seminary, has launched ChristiansAndTheVaccine.com in partnership with the National Association of Evangelicals to help pastors and other Christian leaders talk about the COVID-19 vaccines.

Graham, head of the Billy Graham Evangelistic Association and evangelical relief organization Samaritan’s Purse, appeared on “Axios on HBO” over the weekend to encourage evangelicals to get vaccinated, saying his father, the late evangelist Billy Graham, would have supported it.

Smith said she’s glad Graham and Jeffress, who both informally advised the previous president, are speaking out now about the vaccines, but, she added, “I wish they would have been as vocal about loving your neighbor through masking and public health precautions for the last year.”

There’s a reason why the Friendly Neighbor Epidemiologist approach has resonated with so many Christians, according to Aaron Kheriaty, director of the Medical Ethics Program at UCI Health.

“I think one of the reasons there’s serious engagement with Dr. Smith’s website is that this is a Facebook page that doesn’t just engage in sloganeering. It tries to unpack complicated science for the lay public, and people are obviously hungry for that,” Kheriaty said, speaking alongside Smith on a panel about faith communities and COVID-19 vaccines last month at the virtual Religion News Association Mini-con.

The Rev. A.R. Bernard of the Christian Cultural Center in Brooklyn, who appeared alongside Smith in one of a series of live videos hosted by Facebook on the topic of faith and COVID-19, noted her ability to speak “from both a pastoral perspective and a scientific perspective.” 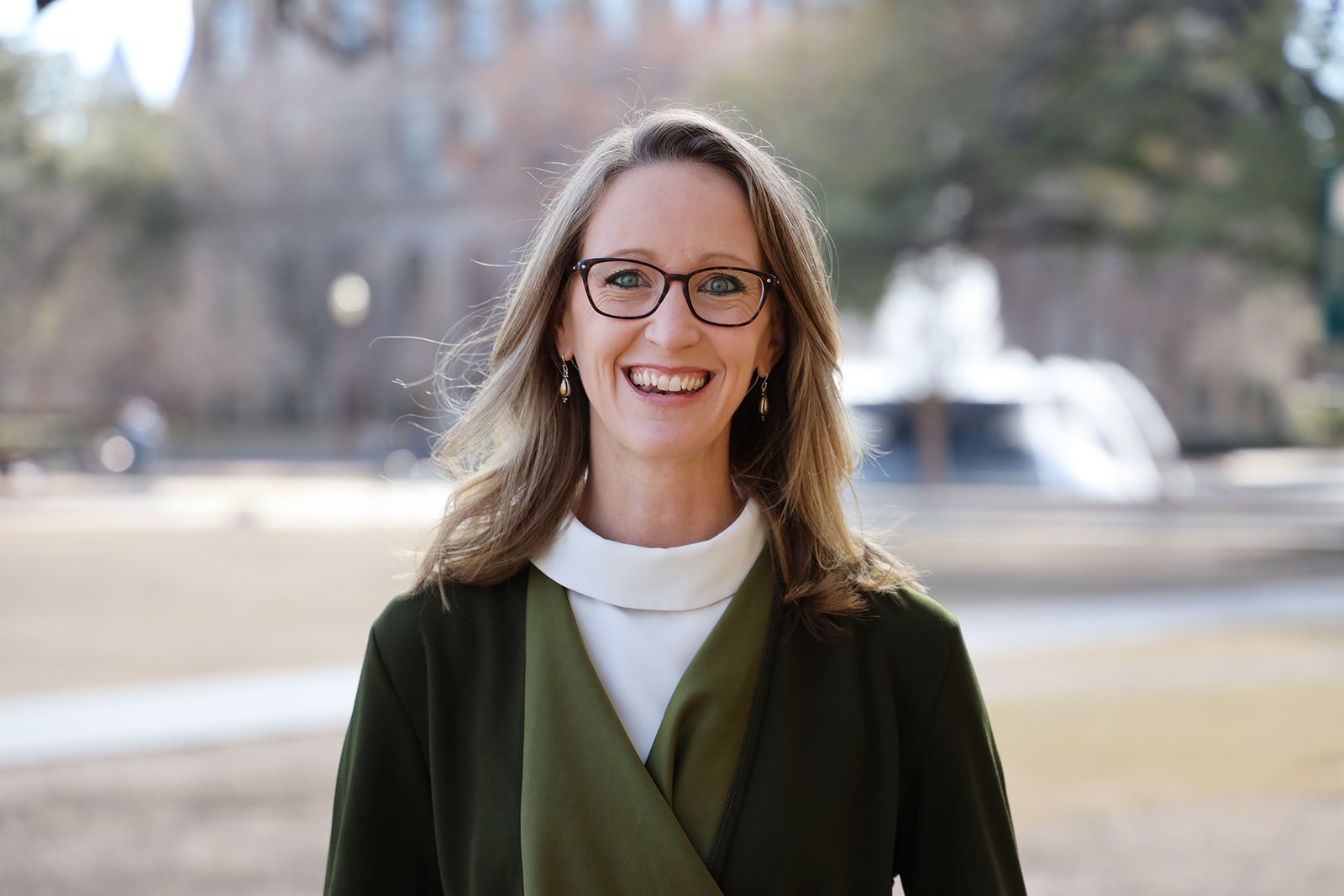 Smith said she believes Friendly Neighbor Epidemiologist has taken off the way it has because her experience of the pandemic has been the same as so many other Christians’ experiences. Her Facebook page has given a voice to those who believed wearing a mask was a way to “love thy neighbor” — her mantra for the past year.

She’s heard all the same arguments and conspiracy theories they have. She and her husband even left their church this past year, she said.

RELATED: Franklin Graham urges evangelicals to get vaccinated before it’s ‘too late’

But, Smith said, she’s come out the other side. She’s found a new Baptist church that shares her view of what it means to “love thy neighbor” and offers a bit of quiet at a time that feels anything but. In 2021, she said, she wants to share with other Christians that’s possible for them, too.

“Hopefully, it can give people hope there’s more to Christianity than what is being shown on Fox News,” she said.

Donate Now!
Posted in
ChristianityCoronavirusEvangelicalFaithFaith and the COVID-19 VaccineNewsProtestantScience & Tech