(RNS) — Many racial justice advocates have insisted that if Black people are free, all people would be free, because so many oppressive systems intersect in Blackness. A year after George Floyd’s murder triggered a global anti-racist uprising, another new wave of protests seems to be proving this hypothesis right.

RELATED: George Floyd anniversary is a chance for white evangelicals to stand up for Black lives

Last year, the multitudes chanting “Defund the police” had connected the murders of Breonna Taylor and George Floyd to a larger U.S. system of racial violence, one that disproportionately kills Black people as a matter of policy. This year, from the streets of Atlanta to East Jerusalem and Gaza, where murals of Floyd have appeared since last June and “I can’t breathe” has become a cry, crowds waving the Palestinian flag are making an important connection between systemic racism and colonialism.

The global protests that erupted on Floyd’s and Taylor’s behalf last year made this connection when demonstrators in Bristol, England, threw a statue of Edward Colston, a British merchant and slave trader, into a local harbor. They were acknowledging that when we talk about racism, we’re often talking about the symptoms of living in the wake of European colonization.

Those white dominions, in other words, that once went stealing Indigenous land and “developing” it through slave labor were installing the colonial system, with its laws, institutions and justifying ideologies of white supremacy. These structures put the “system” in what we call systemic racism. 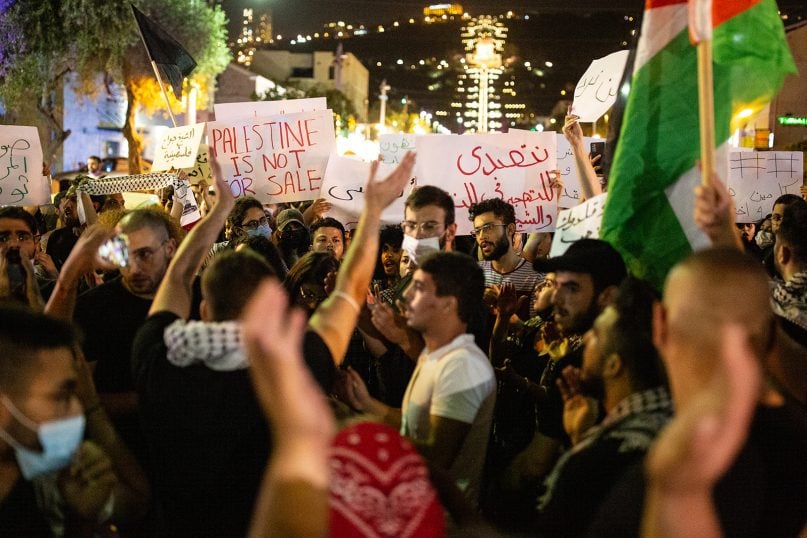 Palestinian citizens of Israel were met with a strong Israeli police response during a protest in Haifa against Israeli actions in Jerusalem’s Sheikh Jarrah neighborhood and around the Al-Aqsa Mosque compound, May 9, 2021. (Photo by Mati Milstein/NurPhoto via Getty Images)

Black power icon Kwame Ture explicitly tied Zionism, white supremacy and colonialism together in a 1964 debate, explaining that Britain’s Balfour Declaration (1917) promised a national home for European Jews (there were already Jews in Palestine before then) “in an area Britain was colonizing: Palestine. (But) Palestine didn’t belong to the British!”

RELATED: George Floyd anniversary is a chance for white evangelicals to stand up for Black lives

In all those decades Black freedom fighters named the treatment of Palestinians as an injustice, there was never a global outcry of solidarity on the scope of today’s. But a global uprising for those once positioned as the very bottom of human hierarchy, once deemed nonhuman, the children of Africa, seems to have broken the seal on championing struggles that were once taboo.

The world is starting to see the way many liberation struggles are connected, as images of Israeli Defense Forces soldiers kneeling on Palestinian necks recall Floyd’s last words, as the images of a 10-year-old Palestinian boy in the back of a police car invokes the memory of Philando Castile’s 4-year-old daughter in the back seat of a Minneapolis police car after Castile was killed, and as the Israeli government’s law and order rhetoric, in response to Palestinians’ resistance, recalls America’s own responses to its liberation struggles.

These struggles may not be identical, but what people are noticing is the fight against the logic of colonialism and imperialism that connects them.

For years, Black activists have endured and rebutted the accusation that the motto “Black Lives Matter” is too exclusive for focusing on the lives of one group. Now, a year after a global uprising under that banner, history is showing that Black suffering comes out of a common legacy. To attend to Black lives puts us in touch with systems of oppression that span the world and harm multitudes.