(The Conversation) — The economies of countries dependent on tourism are clearly hurting, with visitor numbers plummeting as a result of the pandemic.

In Thailand alone, a country where tourism accounts for 11%-12% of the GDP, the number of international tourists dropped by 83% in 2020. During December 2020 – typically a peak tourism month – the country received just over 6,000 foreign tourists – a 99.8% drop from December 2019, when there were nearly 4 million foreign tourists.

The Thai government estimates a loss of 100 billion Thai baht (over US$3 billion) in the first quarter of 2020 and a loss of about 1.45 million jobs as a result of this slump in tourism.

However, the actual loss cannot be captured in these numbers alone. Many cross-cultural exchange opportunities have been lost as well.

I spent much of the previous decade living in Chiang Mai, a medium-sized city in northern Thailand, which relies heavily on tourism. As a scholar who was studying the relationship between tourism and Buddhist temples in the region before the pandemic started, I am able to assess the impact of COVID-19 on these sites of religious importance.

Some Buddhist temples that relied heavily on donations from foreign tourists are now struggling to outlast the pandemic. Additionally, small businesses around temples have been badly hurt, as is the knowledge exchange with international visitors.

Before the pandemic, Wat Phra Chetuphon, known more commonly as Wat Pho and one of the most-visited temples in Bangkok, would receive about 6,000-10,000 tourists per day. Foreign tourists pay an entry fee of 200 baht, or $6.40, while Thai people enter free of charge.

In an interview in January 2021 with Thai news outlet Prachachat, the assistant abbot of Wat Pho stated that the temple can weather this period without tourists for now, but not for much longer. With donations from Thai people, they were able to pay basic expenses of water and electricity and employ cleaning and security staff. But without the foreign tourist fees, it would become difficult to meet the monthly budget of about $96,000. 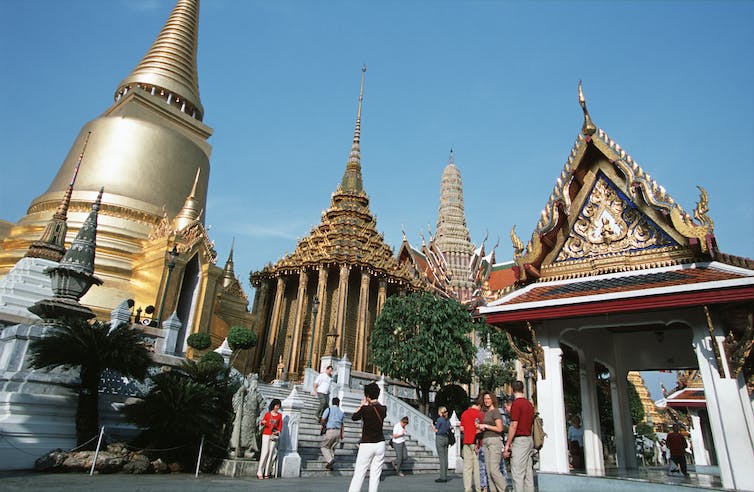 The Wat Phra Kaew, or the Temple of the Emerald Buddha, in Bangkok’s Grand Palace, which typically attracts visitors from all over the world, has seen fewer visitors because of COVID-19.
Ben Davies/LightRocket via Getty Images

Foreign visitor numbers are also scarce in the most famous temple in Bangkok, Wat Phra Kaew, or the Temple of the Emerald Buddha. This temple is part of the Grand Palace, the Thai royal family’s former residence. In 2016, the Grand Palace was named one of the world’s 50 most-visited tourist attractions in the world by Travel + Leisure magazine, with over 8 million visitors per year.

Typically, the high tourist season would see a long line for entry and crowds of people inside, with foreigners paying $16 for entrance to the temple and the Grand Palace. Again, there is no entrance fee for Thai citizens.

Losses have been significant, for members of the monastic community and small businesses that thrive near these famous temple complexes. Many vendors who sell water, street food and souvenirs around the temple have lost their incomes. Many of these people work within Thailand’s informal economy. A 2018 survey found 55.3% of Thailand’s total population found employment through this informal economy.

Much of the the loss of the engagement between foreign tourists and the monastic community cannot be measured in monetary terms. My recent book highlights the energy and effort student monks put into creating programs for foreign tourists to learn about their religion, many aimed at travelers or student groups on college or gap-year programs.

In my research, I have found these cultural exchange programs to be beneficial for tourists and the goals of Buddhist monasticism. Several visitors volunteer while traveling in developing or underdeveloped nations to provide support to those in need. At the same time, these volunteer tourists immerse themselves in different cultures, religions and ways of life.

In Thailand, volunteer tourists typically teach English and could also live in a temple for several months. In my interviews, these tourists said that the experience enabled them to learn about themselves, reflect on their own values and consider new ideas for how to live a happy life.

Buddhist monks see it as their duty to spread their teachings to all who are curious. One program, called Monk Chat, which is hosted by the Buddhist temple Wat Suan Dok and the MahaChulalongkorn Buddhist University, facilitates one-on-one and small-group conversations between monks and foreign travelers in English. 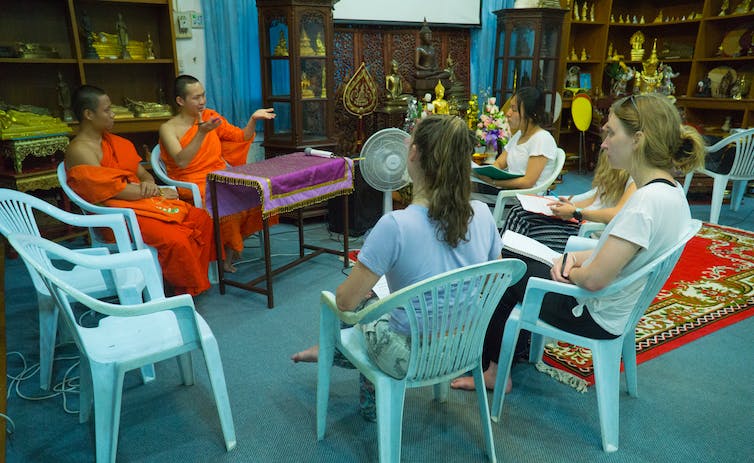 Monks who participate in these programs say that they often develop new ways of thinking based on their discussions with foreigners – from becoming more accepting of cultural differences to being pushed to think deeply about the monastic lifestyle.

For example, when I asked, “How have you changed as a result of meeting foreign tourists?” one monk replied that he used to just accept the monastic rules and practices without considering their purpose. However, after tourists asked why he shaved his head and wore yellow robes, he considered the ways that his lack of hair and uniform were part of a simple lifestyle. He understood more deeply that monks must give up such expressions of individuality as hairstyle and fashion preferences.

Because of the pandemic, Monk Chat has switched to an online outreach. Since April 2020, MonkChat Live is streamed almost every week via Facebook, where various guests, usually monks, prepare some reflections on a specific topic related to Buddhism in the modern world, such as life lessons from COVID-19.

Facebook Live is a good alternative for now, but it does not have the same impact as talking directly with foreigners. The format is more formal, with little chance for personal sharing or observing the playful ways monks interact with one another.

It is difficult to measure these losses, but undoubtedly they will leave a deep impact for some time to come. 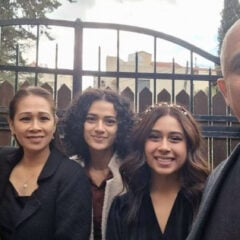 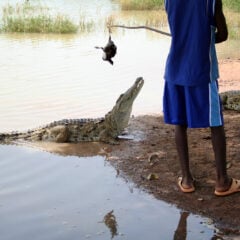 Coronavirus
From luxury stays to ‘champing’ in the sanctuary, churches adopt pandemic-era Airbnb models
Follow us on Facebook!
Submit your photos to RNS