TUCSON, Ariz. (AP) — Alvaro Enciso plants three or four crosses each week in Arizona’s desert borderlands, amid the yellow-blossomed prickly pear and whiplike ocotillo, in honor of migrants who died on the northbound trek.

Each colorful wooden memorial denotes where a set of bones or a decomposing body was found. Over eight years, the artist has marked more than 1,000 locations across public lands dotted with empty black plastic water jugs and camouflage backpacks beneath circling turkey vultures.

“Anything out here can kill you,” Enciso said. “A blister, a snake, not enough water.”

Protecting migrants and honoring the humanity of those who died on the perilous trail is a kind of religion in southern Arizona, where spiritual leaders four decades ago founded the Sanctuary Movement to shelter Central Americans fleeing civil war, and scores of volunteers carry on their legacy today. 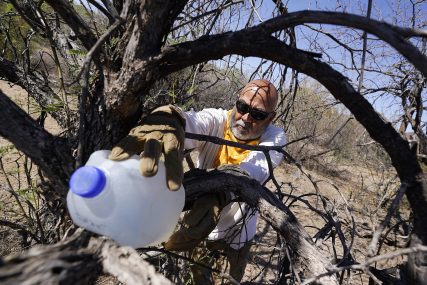 Peter Lucero, part of the Tucson Samaritans volunteer group, places a jug of water along known high-traffic areas for migrants in the desert near Three Points, Arizona, on May 18, 2021. Spirituality remains at the heart of borderlands activism, with faith-based groups such as the Tucson Samaritans that leave water and food in the Sonoran Desert. (AP Photo/Ross D. Franklin) 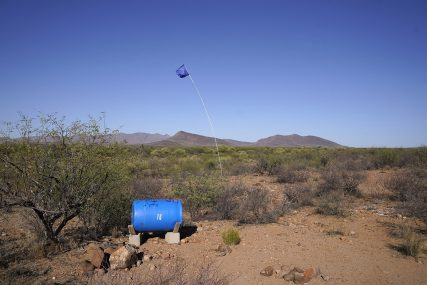 A flag marks a water station set up for migrants by Humane Borders. It is checked by members of the Tucson Samaritans near Sasabe, Arizona, on May 19, 2021. “I’m not looking forward to this summer,” said Douglas Ruopp, chairman of Humane Borders. “No matter what we do, people keep dying.” (AP Photo/Ross D. Franklin)

Faith-based groups working in migrant activism run the gamut from the Tucson Samaritans, which leaves lifesaving caches of water, food and other provisions in the remote wilderness, to a migrant shelter operated by Catholic Community Services of Southern Arizona.

Enciso’s art project, “Where Dreams Die,” fits squarely in that spiritual tradition, though he believes there’s nothing overtly religious in memorializing the dead.

On a recent day he placed a golden cross where the bones of an unknown male were found Sept. 24, 2020. The cause and approximate year of the man’s death remain undetermined.
“Can you imagine what their families go through, not knowing what happened to them?” Enciso said. 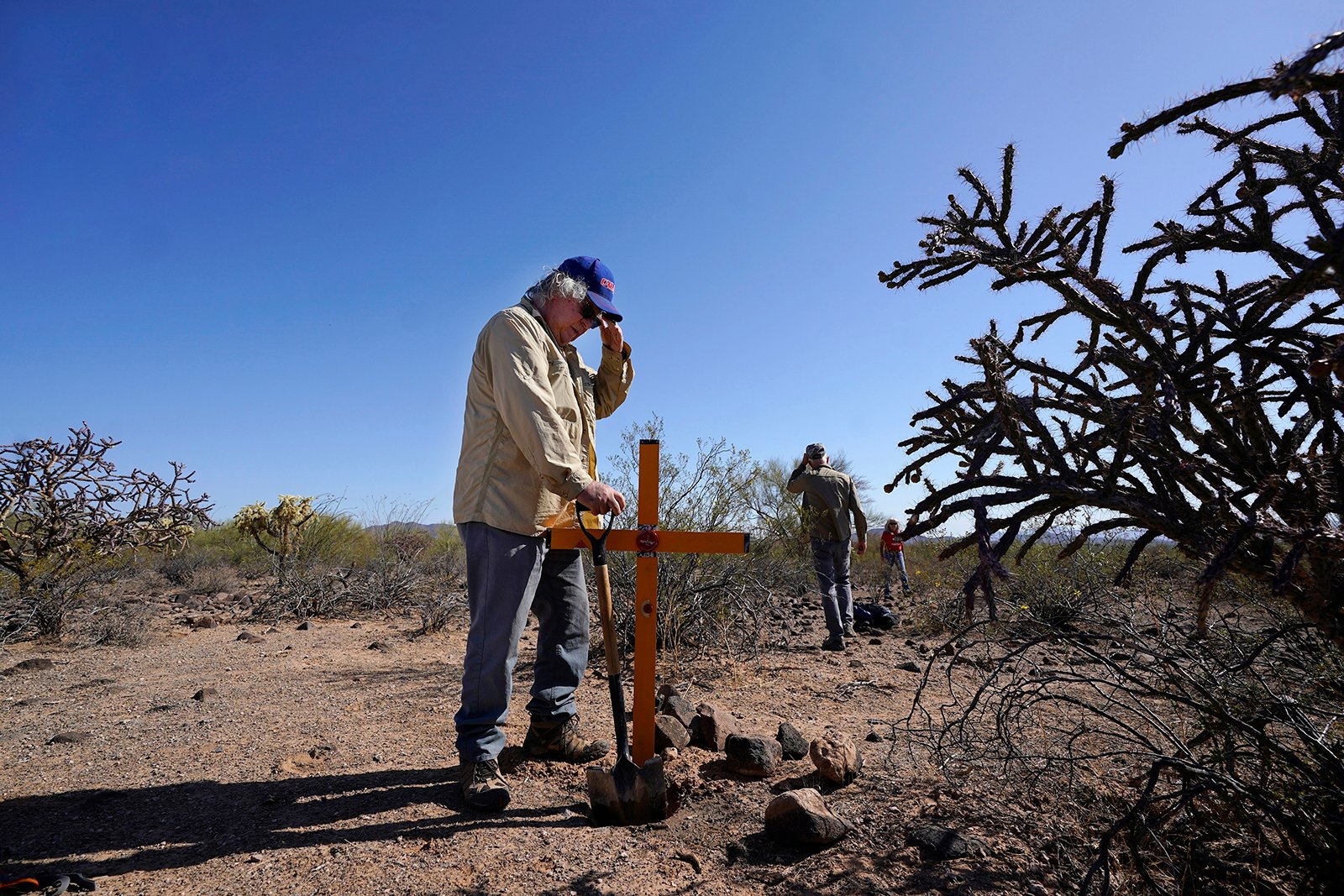 Alvaro Enciso, part of the Tucson Samaritans volunteer group, pauses as he and a group of other volunteers place a new cross on May 18, 2021, at the site where a migrant died in the desert some time ago, near Three Points, Arizona. Enciso says he plants three or four crosses each week. “Can you imagine what their families go through, not knowing what happened to them?” (AP Photo/Ross D. Franklin)

Such activism has roots in the 1981 founding of the Sanctuary Movement, which spread to a more than 500 U.S. Protestant, Catholic and Jewish congregations.

Now 81 and retired, the Rev. John Fife III was pastor at Tucson’s Southside Presbyterian Church when his Quaker friend Jim Corbett told him Central Americans escaping violence were fleeing to the U.S.

Soon Fife and Corbett, who died in 2001, were smuggling Central Americans into the U.S. and sheltering them in their homes, despite their wives’ protests. The church hosted some 13,000 asylum-seekers in the ’80s, with up to 100 people sleeping on the floor on a given night.

“I felt that if I didn’t help, I would have to resign as pastor,” Fife said recently.

Fife was convicted in 1986 of violating U.S. immigration laws and served five years’ probation, but that didn’t deter him.

In 2000 he helped create Humane Borders, which maintains water stations with 55-gallon plastic blue barrels. Two years later he co-founded Tucson Samaritans, which sends volunteers into the wilderness to leave water and food. Fife also had a hand in the 2004 creation of No More Deaths, which staffs remote aid camps.

Many of those volunteering with the groups are of retirement age, like Gail Kocourek.
Every week the Tucson Samaritan volunteer drives donations of clothing and food to Casa de la Esperanza, a new center south of the border in the Mexican town of Sasabe where about 50 migrants a day can get a meal, a shower and clothes. They sleep at hotels or guest houses in town.

“I don’t think anyone deserves to die for trying to make a better life for their family,” Kocourek said. 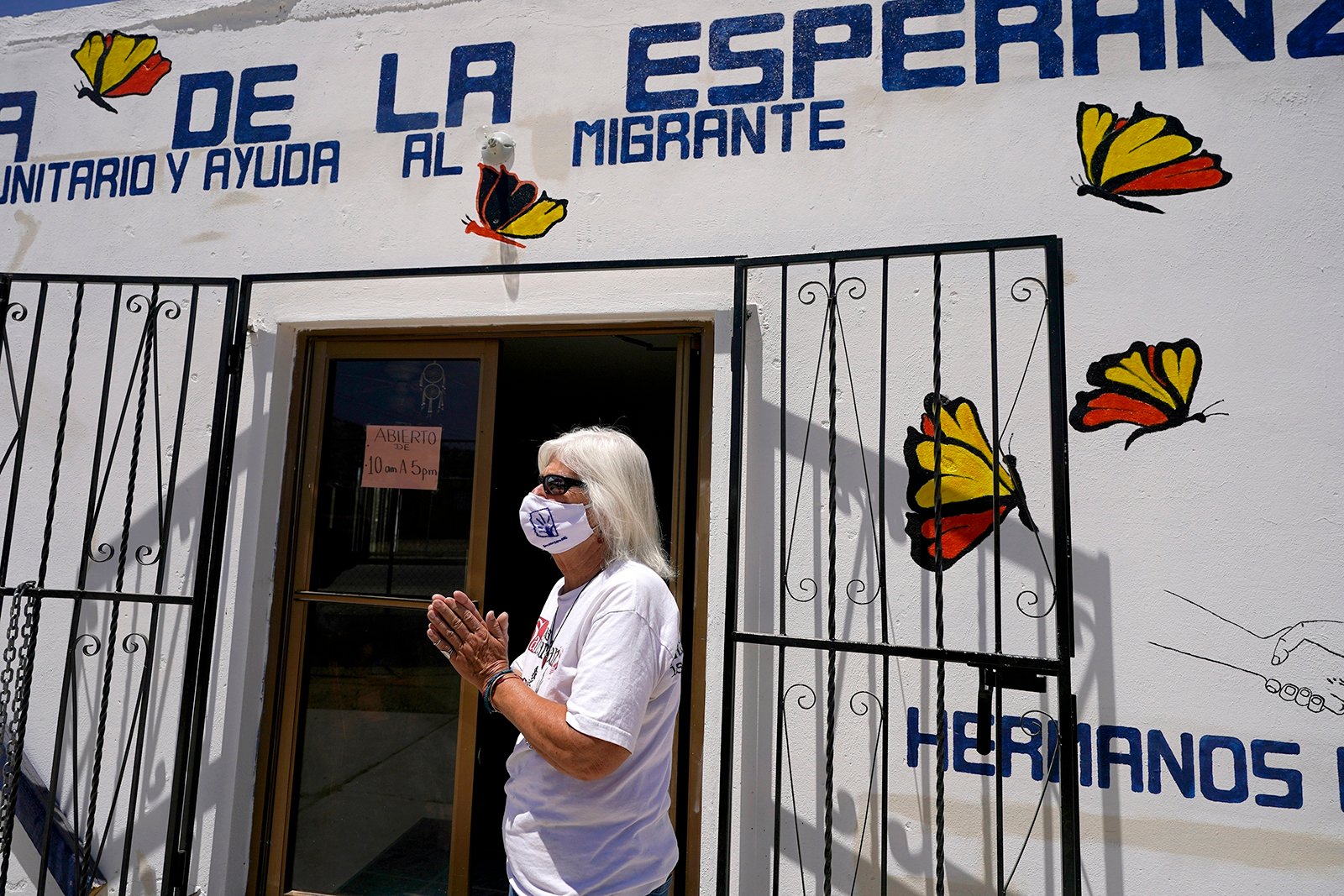 Gail Kocourek, of the Tucson Samaritans volunteer group, pauses as she speaks with migrants in front of Casa de la Esperanza, a new migrant help center just south of the border in the Mexican town of Sasabe, on May 19, 2021. “I don’t think anyone deserves to die for trying to make a better life for their family,” Kocourek says. (AP Photo/Ross D. Franklin)

Often traveling there as well is Dora Rodriguez, who was among 13 Salvadorans who survived in 1980 when 13 others died in the broiling sun near Organ Pipe Cactus National Monument. Then 19, she remained in Tucson.

“And now, 41 years later, people are still dying out here in the desert,” said Rodriguez.

Groups that seek to restrict immigration, such as the Washington-based think tank Center for Immigration Studies, contend the border wall and other barriers are a better way to keep deaths down by keeping migrants out.

For its part, the Border Patrol, in a recent statement on the 20th anniversary of the deaths of 14 people in the Devil’s Highway region southeast of Yuma, noted the danger remains: “Smugglers and guides regularly risk the lives of the migrants who pay them thousands of dollars for help to get to the United States.”

Humane Borders, which works with Pima County chief medical examiner Dr. Greg Hess to map the discoveries of human remains, in 2020 documented 227 deaths, the highest in a decade after the hottest, driest summer in state history. Hess’ office this year received the remains of 79 apparent border crossers through May, and activists fear 2021 could prove especially treacherous with large numbers of people launching journeys. 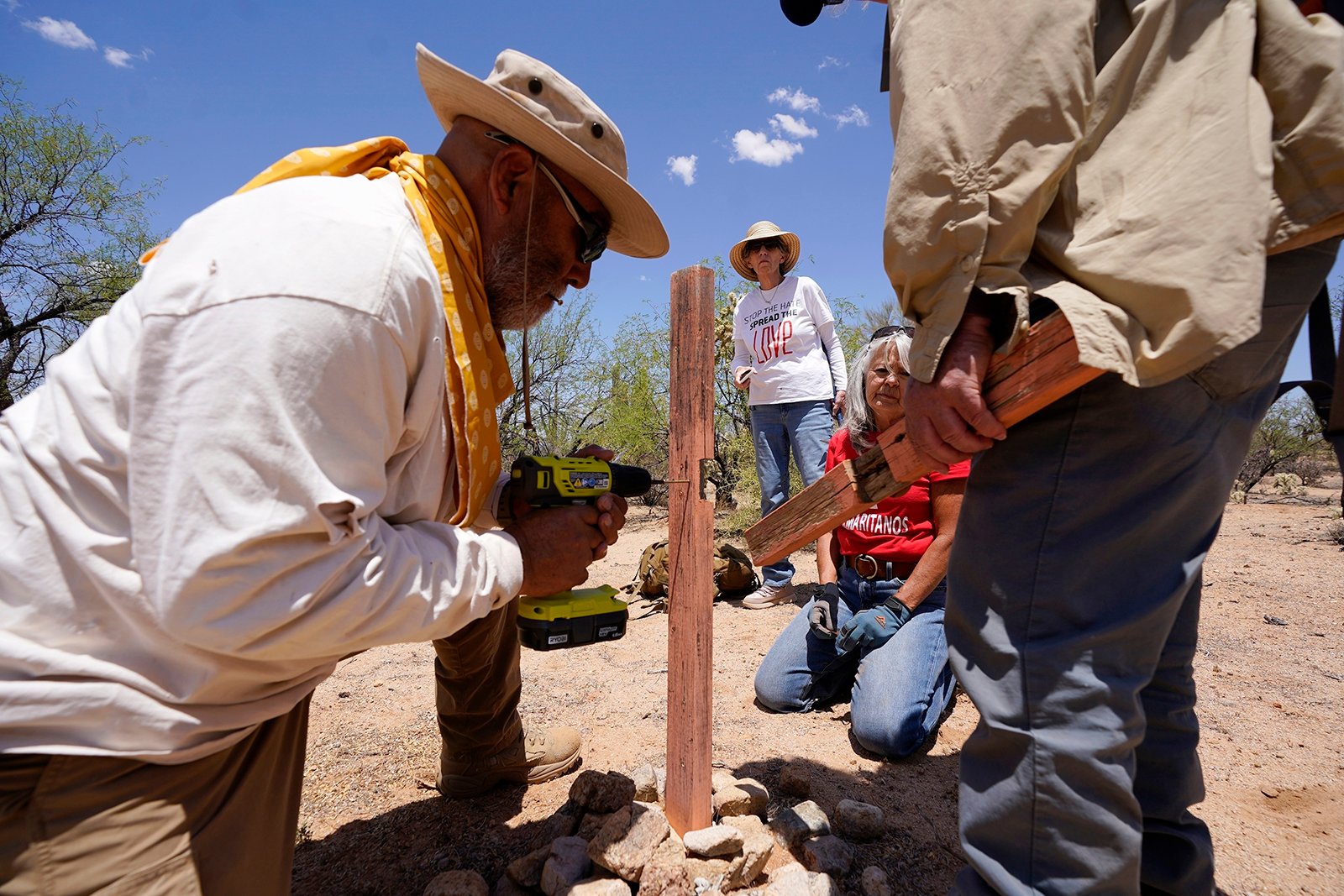 From left, Peter Lucero, Eileen O’Farrell Smith, Terry Stanford and Alvaro Enciso, all volunteers for the Tucson Samaritans, try to repair a damaged cross on May 18, 2021, marking the site where a migrant died in the desert near Three Points, Arizona. (AP Photo/Ross D. Franklin)

Customs and Border Protection reports that apprehensions of migrants are way up, with 20,246 such encounters in the Tucson sector alone in April — a 674% increase over the same month last year — out of 178,622 along the entire four-state border. Rescues of migrants are also up.

“I’m not looking forward to this summer,” said Douglas Ruopp, chairman of Humane Borders. “No matter what we do, people keep dying.”

Yet the danger doesn’t dissuade people like Josue Hernandez Ruiz, a tour guide from the Mexican resort of Huatulco who was laid off during the coronavirus pandemic and ventured north seeking to support his wife and two children. After staying at a guest house in Sasabe, he and a friend planned to cross the desert without a guide.

News
As COVID-19 shutdown lifts, Mecca’s pilgrims bring Islam’s holiest city back to life
Follow us on Facebook!
Submit your photos to RNS