NASHVILLE, Tenn. (RNS) — A committee that determines whether churches are conforming to Southern Baptist Convention affiliation rules will consider whether Saddleback Church, a prominent California congregation led by bestselling author Rick Warren, can continue in fellowship with the SBC after Saddleback recently ordained three women pastors.

Shad Tibbs, pastor of Fellowship Baptist Church in Trout, Louisiana, made the request on Tuesday (June 15), the first day of the Southern Baptists’ two-day annual meeting.

Tibbs called on the SBC to “break fellowship with Saddleback Baptist Church, as they have ordained three ladies as pastors, and all other churches that would choose to follow this path. At the very least, I am asking that the validity of this matter be looked into.”

Saddleback, which does not have “Baptist” in its name but is one of the largest churches affiliated with the SBC, did not respond immediately to a request for comment.

President J.D. Greear, who was officiating at the afternoon session when Tibbs made his motion, said the challenge would be filed with the credentials committee. 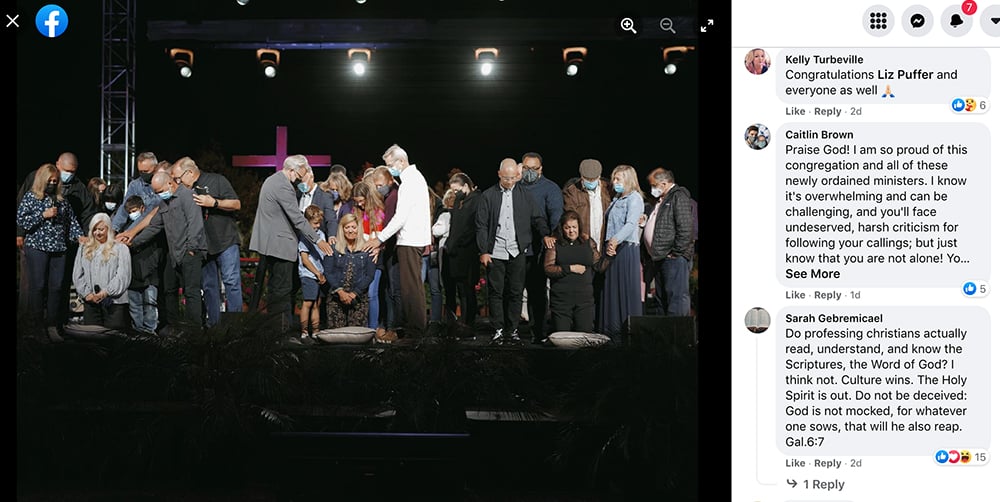 Local associations or state conventions have removed several churches after they appointed women as pastors, but the SBC, the national body, has not.

Tibbs cited the Bible and an article of the denomination’s faith statement, the Baptist Faith and Message, last updated in 2000, which says, “While both men and women are gifted for service in the church, the office of pastor is limited to men as qualified by Scripture.”

Tibbs cited a verse from 1 Timothy in the New Testament, as the faith statement does, which says, “I do not allow a woman to teach or to have authority over a man; instead, she is to remain quiet.”

According to the SBC bylaws, the credentials committee considers such requests and makes a recommendation to the Executive Committee if it concludes the church “is not in friendly cooperation.” If the Executive Committee decides the church is no longer welcome, its ruling will be made public. If a church should appeal such a decision, messengers at an annual meeting could decide whether to sustain the ruling.