(RNS) — David Platt had a dream for the future of McLean Bible Church.

The largely conservative northern Virginia church across the Potomac from Washington had grown from a group of five families in the 1960s to a congregation of more than 10,000 spread across several campuses, attracting politicians and business leaders to the church’s evangelical message and values.

Much of that growth had happened under former pastor Lon Solomon, a Jewish convert known for his Bible preaching, zeal for evangelism and passion for serving children with special needs.

Platt, a bestselling author and speaker, recounted the church’s history in a sermon in the summer of 2019, about a year after he succeeded Solomon as pastor, in which he asked: “What if our best days as a church are ahead of us, not behind us?”

Platt went on to call the church to give up everything for the glory of God, echoing the message of his 2010 book, “Radical,” a bestseller that called Christians to give up the American dream in order to serve Jesus and transform the world.

But a series of controversies and the country’s growing political polarization have turned Platt’s dream into a nightmare.

Critics say the church’s leadership has become “woke” and has substituted critical race theory and social justice for biblical teaching. Platt and other leaders, they say, have abused their power by violating the church’s constitution.

The dispute at McLean may now end up in court.

In a complaint filed Thursday (July 15), five McLean members allege that Platt and other leaders illegally barred them from voting at a recent congregational meeting to approve new church leaders. The plaintiffs also claim a follow-up election at the church this weekend violated the church’s constitution.

“This is a breach of contract action seeking to remedy Defendants’ illegal actions to deny Plaintiffs their rights to cast a free and fair vote, to have those votes lawfully counted, and to enjoy their right to a secret ballot,” according to the complaint.

The dispute at the church came to a head on June 30 at a congregational meeting held to approve three new elders to the small group that wields most of the authority at the church.

RELATED: David Platt interview: A summons to lose your life

According to the church constitution, elders must be approved by a three-quarters majority, but that day the vote failed, a first in McLean history, according to a church email.

In response, Platt accused his critics in a sermon of spreading disinformation and stuffing the ballot box with votes from former members and “inactive” church members.

“I want you to listen closely to the words I am about to say,” he said in his sermon the following Sunday. “A small group of people, inside and outside this church, coordinated a divisive effort to use disinformation in order to persuade others to vote these men down as part of a broader effort to take control of this church.” 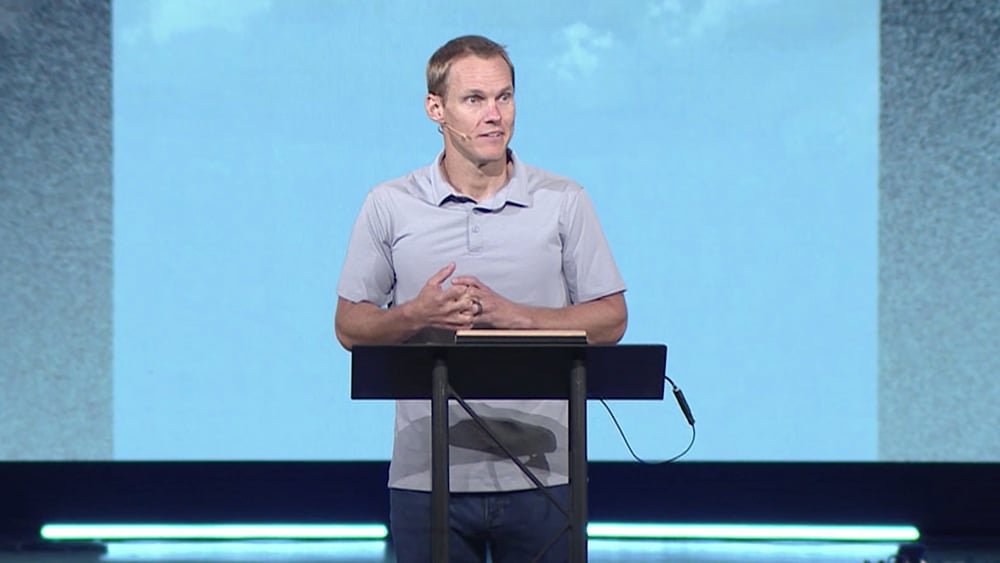 A follow-up election held this past Sunday was held under new rules. Church members were required to show identification, and ballots were labeled with members’ names. Any church member on McLean’s inactive list was given a provisional ballot.

Three new elders were approved by about 80% of active member votes. There were not enough provisional ballots to change the outcome, according to an email from church leaders.

Longtime member Bill Frazer, 69, believes Sunday’s election violated the church’s constitution, which states that any member who misses services eight weeks in a row can be designated as inactive. COVID-19, Frazer said, has made that rule unenforceable. With many active members participating in services online, especially those, like Frazer, who are not vaccinated, there is no way to tell who is attending. And the church has not regularly tracked individual attendance for years, he added.

RELATED: At Founders event, Southern Baptists urged to choose the Bible over CRT

Frazer also believes church leaders disqualified people who they thought would vote “the wrong way.” Since the ballots included church member names, he said, leaders would know how church staff and other members voted, opening them up to retaliation.

Plaintiffs in the lawsuit echo Frazer’s concerns, saying that the ballots used by the church violated McLean’s constitution. “The heart of the complaint really comes down to truth, transparency, and a free, open, and uncoerced process,” said plaintiff’s attorney Rick Boyer.

Boyer said courts are often reluctant to get involved in church disputes. But he argued that Virginia law does require churches to follow rules outlined in their constitutions. Plaintiffs hope that a court will declare Sunday’s election void and require the church to hold a new election.

Platt and other church leaders declined to respond to specific questions about the lawsuit and disputed church election.

“Because of the nature of a lawsuit, unfortunately, we cannot provide any further comment at this time,” the elders said in a statement. “We praise God for our church family’s affirmation of new elders, and we would deeply appreciate your prayers for all of McLean Bible Church as we move forward in our mission.”

Bart Barber, a Texas Baptist pastor who is writing a book on congregational forms of church governance, said that church voting is aimed at finding consensus about what God wants the congregation to do. Doing that in a large church is difficult, Barber said, as McLean is discovering.

Barber pointed out that voting is usually done in a public way, by voice vote or raising hands, so there’s no historic expectation of privacy, but using a ballot with a church member’s name on it, especially for a leadership role, would be unprecedented, in his experience.

Platt came to McLean in 2017, while he was still president of the Southern Baptist Convention’s International Mission Board. He became pastor in 2018 after resigning from the IMB, where his tenure had been disappointing and included the loss of almost 1,000 missionaries to resignations and early retirement.

“Many Christians look at the Bible and then look at the picture of American Christianity around them and think, ‘This doesn’t add up. Something is wrong here,'” he told Religion News Service in a 2013 interview. “And so I think I simply put into words what many people were already sensing.”

In recent years, Platt, like other high-profile evangelical pastors, including former SBC President J.D. Greear and Texas megachurch pastor Matt Chandler, have been outspoken about racism and social justice issues, saying that the Bible teaches them to address those issues.

That’s led to accusations that Platt and others have become “woke” and liberal. A dispute over critical race theory — which describes how systemic racism affects society — was one of the major topics of discussion at the recent SBC annual meeting in Nashville, Tennessee. 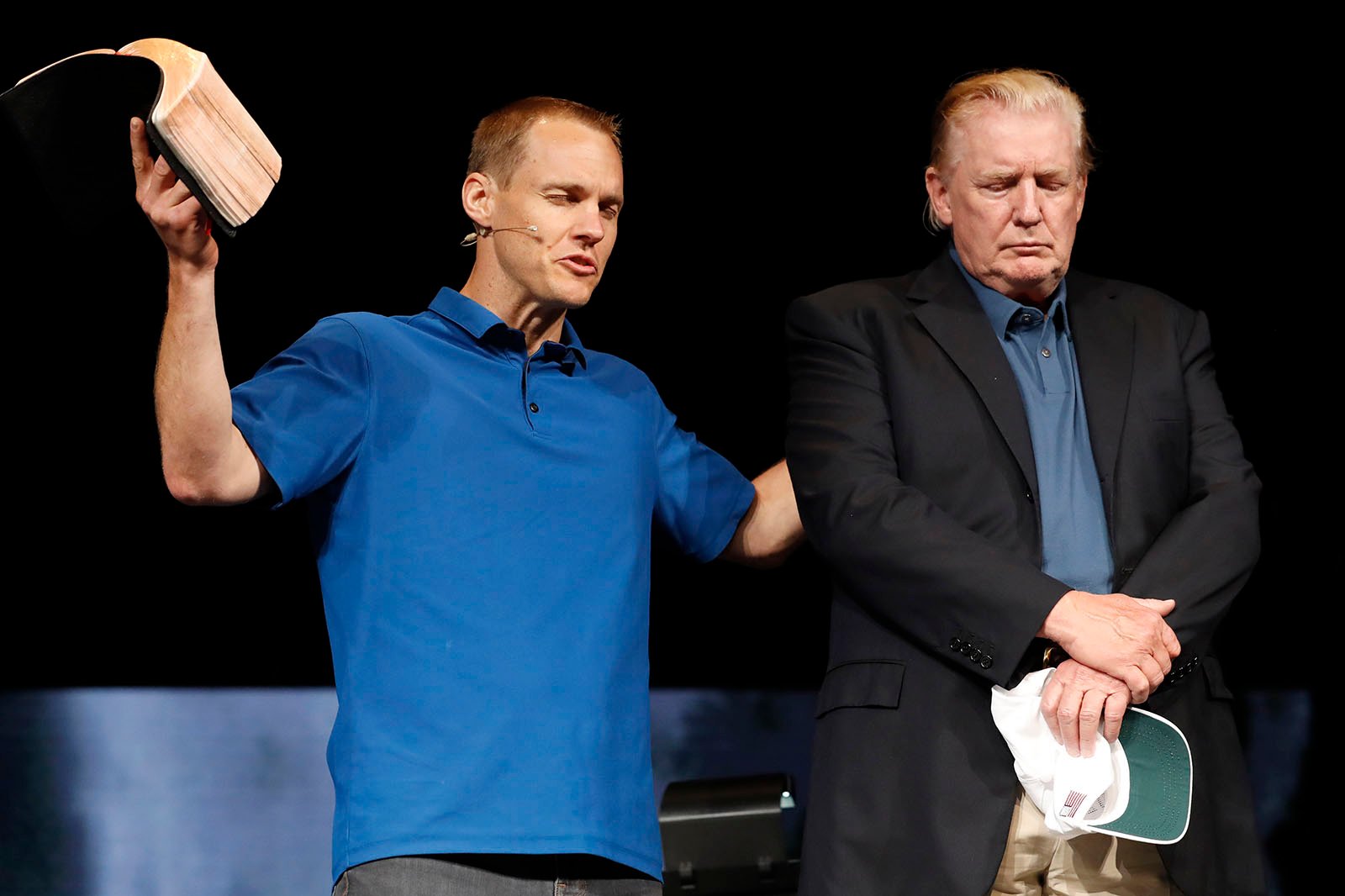 Platt was forced to defend himself in 2019, when then-President Donald Trump showed up on a Sunday morning at McLean Bible with little notice and asked Platt to pray for him.

“The fear of the Lord is the beginning of wisdom,” Platt said during the prayer, quoting the biblical Book of Proverbs with his arm around Trump’s back. “Fools despise wisdom and instruction. God give him wisdom.”

Platt later posted a letter on the church’s website, since removed, and on social media, saying that his decision to pray for the president had angered some church members.

Platt has angered other members for maintaining the church’s reputed ties with the Southern Baptist Convention.

The church’s constitution describes it as an independent church that “shall not, and cannot, be affiliated with any denomination.” But in 2016, under Solomon, the church began to give money to SBC church planting programs and it has donated about $100,000 a year as a cooperating church. When Platt began preaching at McLean, the church was identified as an SBC church in press accounts.

Current McLean leaders have denied that the church is a member of the SBC and posted a letter from the SBC’s Executive Committee to support that claim. The letter describes McLean as a partner with the SBC but not “affiliated denominationally with the SBC.”

But a spokesman for the SBC, while saying “McLean Bible Church, like all Southern Baptist churches, is an independent and autonomous local church,” confirmed that McLean is considered an SBC church.

Frazer said the confusion over McLean’s relationship with the SBC — and the election controversy — reflect a bigger problem with the church.

“The key problem here is a lack of transparency. And that leadership is not listening,” he said.

Once the first vote for the elders failed, Frazer believes that Platt and leaders should have stopped and listened to the congregation’s concerns. Church members are asked for their opinions on things like what color to paint the women’s bathroom, he said; why not ask their opinion on more substantive matters such as CRT or joining the SBC?

Frazer, who is not a plaintiff, said the lawsuit and controversy at the church were “unfortunate” and that he hated to see the church’s dirty laundry aired in public.

Still, he is hopeful.

“I think we’re going to work through this,” he said.