(RNS) — Six decades after being denied a spot in the space program by NASA because of her gender, 82-year-old Wally Funk finally reached space aboard the first human flight of billionaire Jeff Bezos’ space tourism venture, Blue Origin.

Few people were more excited for Funk than her fellow congregants at White’s Chapel United Methodist Church in Southlake, Texas.

About 300 members of White’s Chapel turned out for a space launch watch party Tuesday morning (July 20) to view a livestream of the launch that made Funk the oldest person in space. (She edged out the late Mercury 7 astronaut John Glenn, who returned to space aboard the Discovery shuttle in 1998 at age 77.)

RELATED: From Apollo 8 to SpaceIL, how to celebrate Shabbat, Ramadan and Christmas in space

Funk’s journey to space began in the 1960s when she volunteered for the Woman in Space Program, a privately funded project that tested female pilots’ fitness for space travel. She was the youngest graduate of the program, whose participants became known as the Mercury 13, outperforming the men who went on to become NASA’s first astronauts, according to Funk.

But NASA repeatedly turned down her applications to join the space program.

“Everything the FAA has, I’ve got the license for,” she said in a video Bezos posted recently on social media.

Still, Funk never gave up her dream of spaceflight.

She applied to NASA again after it began admitting women in the late 1970s. In 2009, she told the alumni magazine at her alma mater, Oklahoma State University, “I’m still going into space one day.” 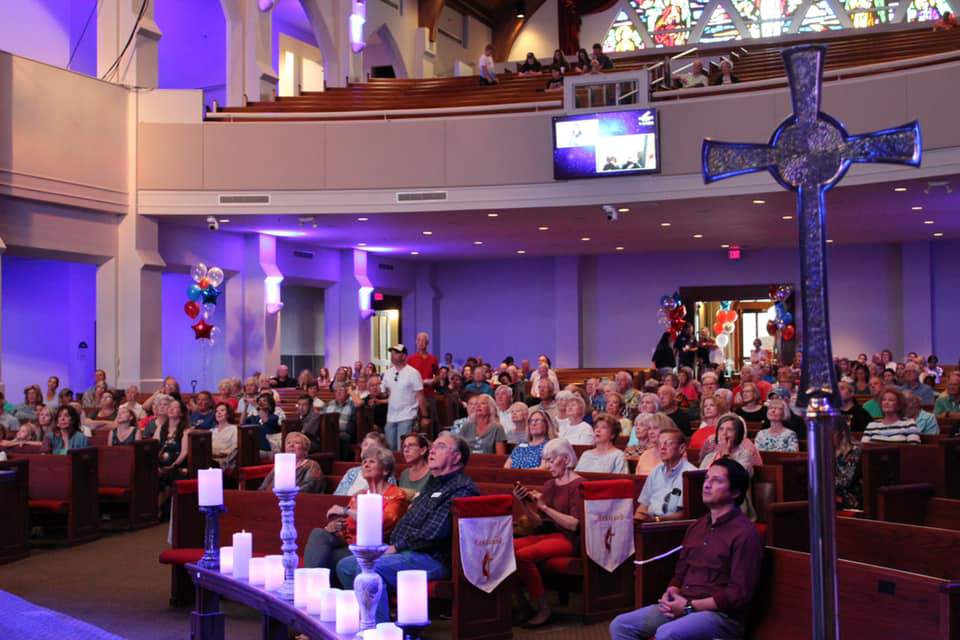 She finally got the chance when Bezos invited her earlier this month to be an “honored guest” aboard Blue Origin’s first human flight to space.

On Tuesday, Funk flung her arms wide jubilantly as she stepped out of the space capsule, back on Earth.

Photos and video shared online by a local Fox 4 News reporter showed her fellow church members at White’s Chapel counting down to the launch, projected on a large screen in the church sanctuary. Members cheered, clapped and jumped from their pews as the reusable suborbital space tourism vehicle, named the New Shepard, left the ground.

RELATED: Astronaut and senator, John Glenn saw no conflict between faith and science

Many signed a poster reading: “Congratulations, Wally! White’s Chapel is so happy for you. We love you very much!”

“It’s like a family member, and we’re just so proud of her,” said the Rev. John McKellar, co-pastor at White’s Chapel.

“It’s thrilling, you know — a lifelong dream. With all that she’s experienced and that she’s done and the spirit and attitude she’s had, what an inspiration she’s been to us all.”

McKellar said Funk has been a member at White’s Chapel for at least 10 years, attending whenever she isn’t sharing her story across the country and keeping him up to date on her travels. With no close relatives in the area, Funk considers the church her family, the pastor said, and she gets a lot of love from the congregation in return for the love she gives.

“The person that you see in the media is the real deal. She is the most positive, enthusiastic, upbeat person, and she just encourages everyone around her,” he said.

Funk was traveling the Sunday the church learned she would be going into space aboard the New Shepard, but members still gave her a standing ovation, according to McKellar. They gave her another when she returned the next week.

On Tuesday, members of all ages showed up early to watch her launch over coffee and refreshments — from little girls in astronaut costumes to a 71-year-old woman who told the pastor if Funk could go to space at age 82, she planned to go to law school. They cheered every time they heard her name on the livestream.

“This is just helping people dream about what’s possible,” he said.

Funk’s unflagging positivity and determination to make it to space are equally inspiring, according to the pastor.

“Nothing has ever gotten in my way,” Funk said in the video posted by Bezos.

“They said, ‘Wally, you’re a girl. You can’t do that.’ I said, ‘Guess what? It doesn’t matter what you are. You can still do it if you want to do it, and I like to do things that nobody has ever done.’”