Ricky Brock Jr., 34 , is the father of four children. He joined TikTok last fall to make “stupid videos” and slowly gathered a following of 500.

In December 2020, he responded to another creator’s video explaining why he was no longer a devout Christian. In his video response, Brock explained how his theology degree caused him to lose his faith. 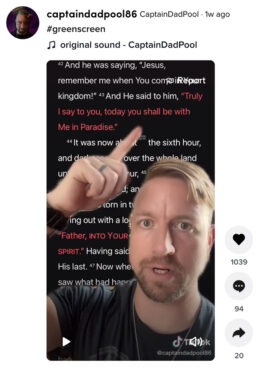 Brock, like others on TikTok, once hankered to debate atheists. So he enrolled in a BA in theology at Valley Forge University and pursued ordination in the Assemblies of God. In the process of studying, he found a different belief system than what he learned growing up. Like Reddell, he’d always believed the four Gospels were written by eyewitnesses.

“Then I get to Bible college and they’re like, ‘Yeah, we have no idea who wrote the Gospels, but it most certainly was not the disciples.’ And it’s like: ‘Oh really? Okay,'” said Brock. “One belief kind of fell after the other,” he added.

Deconstruction was a term Brock learned through the TikTok community. “Deconstruction is unlearning what has been instilled into you on a deep and permanent level,” he said, “unlearning emotional habits you learn from the church.”

Brock’s videos keep it simple. He addresses viewers’ comments and questions from a garage or a couch, usually wearing a black tank top or T-shirt. The most common questions viewers ask, he said, are “What happens after we die?” and “How can I get over a fear of hell?” Sometimes followers ask him big questions or for life advice — questions they might ask a therapist or a pastor. Brock has limited the time he spends answering those messages. He’s found them overwhelming.

“I’m just a guy who makes TikToks,” he said.

Go to next profile: ‘Not everyone loves me’— @JeGaysus Religion Hub
Monsters are everywhere in the Bible – and some are even human
Follow us on Facebook!
Submit your photos to RNS