(The Conversation) — Panic and turmoil grip Afghanistan after Taliban insurgents captured the capital city of Kabul and the president fled on Aug. 15, 2021.

There would be “no transitional government in Afghanistan,” Taliban officials told Reuters news service. The insurgent group “expects a complete handover of power” – though many nations may not recognize a Taliban government that took power through armed struggle rather than by continuing the now-failed internationally mediated peace negotiations.

Fearful citizens aiming to escape the rule of radical Islamic fighters were “lining up at cash machines to withdraw their life savings,” according to the Associated Press, and overrunning the Kabul airport’s tarmac as U.S. military evacuation flights tried to take off.

The fall of Afghanistan came just three months after the U.S. began to withdraw its troops from the country following a 20-year war that killed 2,448 U.S. service members, 3,846 U.S. military contractors and some 66,000 Afghan national military and police.

For Afghans and international observers of a certain age, history is repeating itself in Afghanistan.

The Taliban – which means “the students” in Pashto – seized control of Afghanistan in 1996 after capturing Kabul in the Afghan civil war. They established a government based on their extreme interpretation of Islamic Sharia law and ruled for five years. The Taliban regime was then toppled in 2001 by the U.S.-led invasion of Afghanistan. 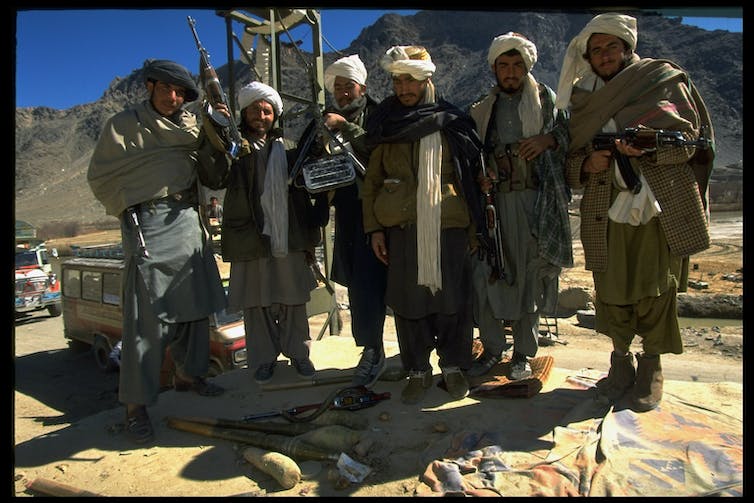 Taliban fighters at a roadside checkpoint in Afghanistan in 1995.
Robert Nickelsberg/Getty Images

Here, Afghanistan experts offer insight into the Taliban – then and now – and explain the United States’ role in Afghanistan’s collapse.

Have the Taliban changed since 2001?

That’s the question Sher Jan Ahmadzai, director of the Center for Afghanistan Studies at the University of Nebraska, Omaha, set out to answer in his July 2021 story on the Taliban.

Ahmadzai, who is from Afghanistan, explained that, “During the Taliban’s five-year rule, women were prohibited from working, attending school or leaving home without a male relative. Men had to grow beards and wear a cap or turban.”

Anyone not abiding by this code could be lashed, beaten or humiliated. 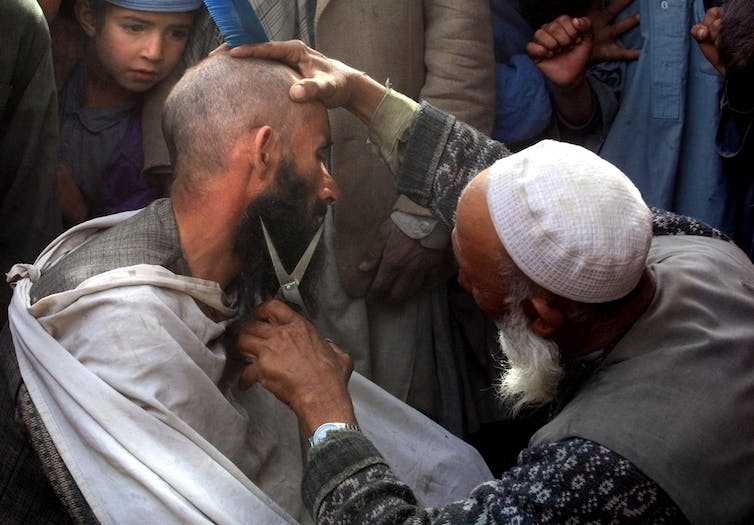 Getting a trim in Kabul after the Taliban’s ouster, November 2001.
Alexander Nemenov/AFP via Getty Images

The rhetoric of the Taliban has moderated since 2001, Ahmadzai wrote, but their extremist beliefs have not changed.

“All evidence suggests the Taliban still believe in restoring their old system of emirate, in which an unelected religious leader, or emir, was the ultimate decision-maker,” given authority from God.

Already, in Taliban-controlled parts of Afghanistan, Ahmadzai wrote, Taliban have rulers “have asked families to marry off one girl per family to their fighters; said women should not leave home without a male relative; and ordered men to pray in mosques and grow beards.”

Read more:
Afghanistan after the US withdrawal: The Taliban speak more moderately but their extremist rule hasn’t evolved in 20 years

Afghan women may have the most to fear from the Taliban’s victory.

Scholars Homa Hoodfar and Mona Tajali interviewed 15 Afghan women activists, community leaders and politicians over the past year. Few of them felt the Taliban believed in gender equality.

“Reform of the Taliban is not really possible. Their core ideology is fundamentalist, particularly towards women,” one 40-year-old women’s rights activist from Kabul told Hoodfar and Tajali.

In international meetings and on social media, Taliban leaders suggest only that women have rights “according to Islam.”

A schoolteacher in northern Afghanistan told the researchers, “In the beginning, when we saw the Taliban interviews on TV, we hoped for peace, as if the Taliban had changed. But when I saw the Taliban up close, they have not changed at all.” 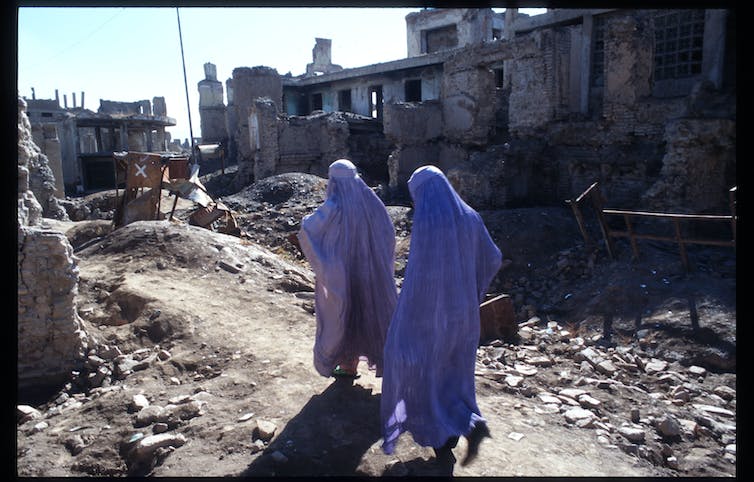 Women in traditional burqas in wartorn Kabul, in 1996, as the Taliban fought to take control of Afghanistan.
Roger Lemoyne/Liaison/Getty Images

Read more:
Taliban ‘has not changed,’ say women facing subjugation in areas of Afghanistan under its extremist rule

The United States cannot shirk moral responsibility for the human rights abuses and violence that Afghans will likely face under Taliban rule, according to University of Washington philosopher Michael Blake.

“This ought to trouble the politicians who defend the withdrawal, and those voters who gave power to those politicians,” he says.

Calling the collapse of Afghanistan “morally tragic,” Blake says the U.S. may have an obligation to provide refuge to Afghans who bear particular risks because they were part of the United States war effort. That includes Afghan translators, who have been targeted by the Taliban for their work with the U.S. military.

The Biden administration in July 2021 authorized a US$100 million “urgent” expansion of the special visa program that could get up to 20,000 Afghans affiliated with the U.S. war effort out of Afghanistan and resettled abroad.

But it is difficult if not impossible now for those people to flee a country under Taliban rule. And translators are far from the only Afghans at risk of retaliation by the Taliban. 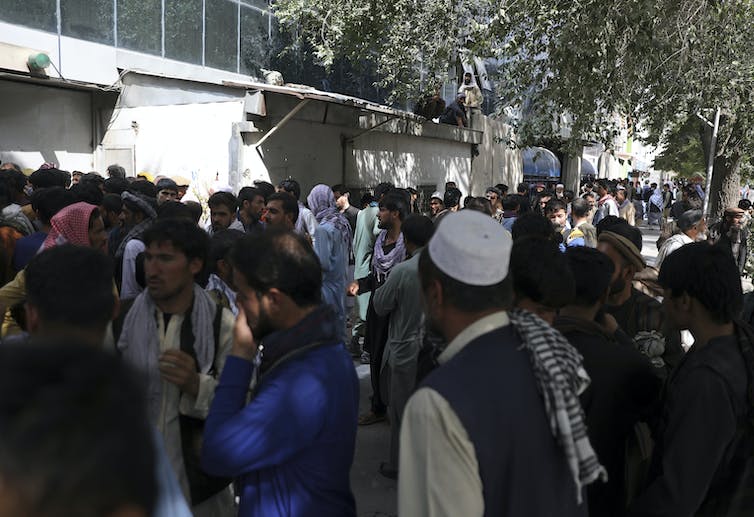 Read more:
Why the US won’t be able to shirk moral responsibility in leaving Afghanistan

The Taliban’s victory in Afghanistan is also a victory for the terrorist organization al-Qaida, according to Greg Barton, chair in global Islamic politics at Deakin University in Australia.

“Afghanistan was the birthplace of al-Qaida in 1988. The group gave rise to terrorist networks around the world, including…al-Qaida in Iraq, which morphed into the Islamic State,” writes Barton.

The U.S. originally invaded Afghanistan to hunt down and destroy al-Qaida after the group attacked the World Trade Center and Pentagon on Sept. 11, 2001. Afghanistan had become a haven for terrorists under Taliban rule.

With the Taliban’s return to power, international terrorist organizations could – sooner than anticipated – begin openly operating out of the country again, said Chairman of the U.S. Joint Chiefs of Staff Gen. Mark Milley on Aug. 15, 2021.

5. Could US forces return to Afghanistan?

When former President Donald Trump made a deal with the Taliban to end the U.S. war in Aghanistan, acceding to a longstanding Taliban demand, public opinion polls indicated widespread support for the decision.

But a “rapid takeover of the country by the Taliban, with the subsequent persecution of women and domestic opponents of the regime, may well produce a backlash among millions of Americans,” Schwartz wrote on Aug. 13, 2021.

Schwarz notes that “the brutality of Islamic State executions led U.S. forces back into Iraq” after President George W. Bush had declared victory there. Similarly, the “repression and carnage involved in a Taliban triumph” could make Biden rethink a full U.S. withdrawal from Afghanistan that would “cast a profound and damaging shadow over the entire Biden presidency.”

Read more:
In Afghanistan, the US again gets to choose how it stops fighting


This story has been updated.

(Catesby Holmes, International Editor | Politics Editor, The Conversation US. The views expressed in this commentary do not necessarily reflect those of Religion News Service.)

Religion Hub
Christians hold many views on Jesus’ resurrection – a theologian explains the differing views among Baptists
Follow us on Facebook!
Submit your photos to RNS