(RNS) — The spokesman for a major evangelical nonprofit was fired for promoting vaccines on the MSNBC “Morning Joe” cable news show, Religion News Service has learned.

Daniel Darling, senior vice president of communications for the National Religious Broadcasters, was fired Friday (Aug. 27) after refusing to admit his pro-vaccine statements were mistaken, according to a source authorized to speak for Darling.

His firing comes at a time when Americans face a new surge of COVID-19 infections due to the highly contagious Delta variant even as protesters and politicians resist mask mandates or other preventive measures.

During a broadcast on Aug. 2, Darling, an evangelical pastor and author, told host Joe Scarborough about how his faith motivated him to get a COVID-19 vaccine. Darling described the vaccines as an amazing feat of discovery by scientists, some of whom share his Christian faith.

Darling said he was proud to be vaccinated.

“I believe in this vaccine because I don’t want to see anyone else die of COVID. Our family has lost too many close friends and relatives to COVID, including an uncle, a beloved church member and our piano teacher,” Darling told Scarborough.

Earlier this week, leaders at NRB, an international association of Christian communicators with 1,100 member organizations, told Darling his statements violated the organization’s policy of remaining neutral about COVID-19 vaccines. According to the source, Darling was given two options — sign a statement admitting he had been insubordinate or be fired.

When he refused to sign a statement, Darling was fired and given no severance, the source told RNS.

Troy Miller, CEO of NRB, confirmed Darling was no longer with the organization. He did not respond to a question about the role Darling’s statements about vaccines played in his departure.

“Dan is an excellent communicator and a great friend. I wish him God’s best in all his future endeavors,” Miller told RNS in an email. 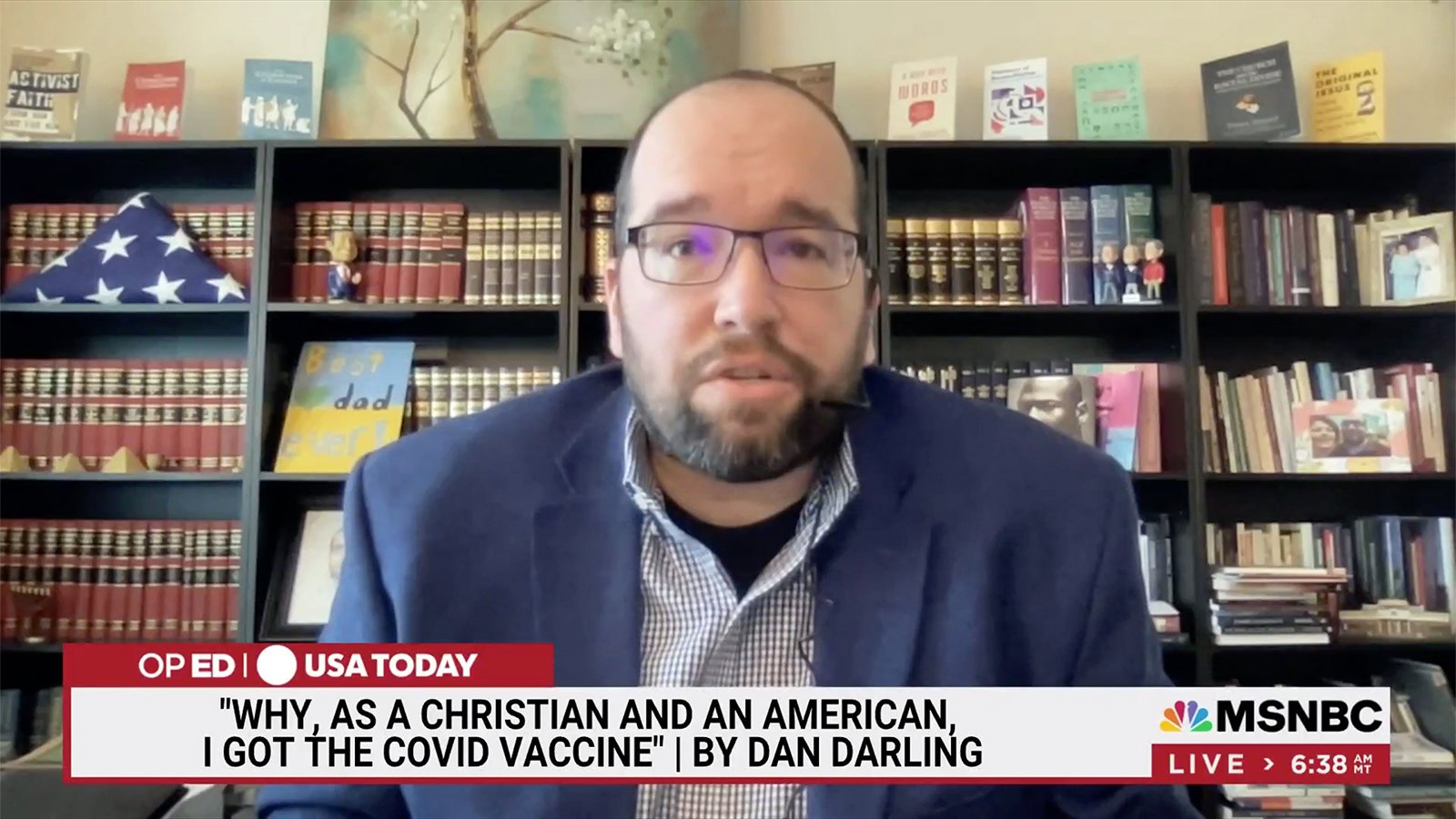 In a statement reported by Ruth Graham of the New York Times, Darling said that he was “sad and disappointed that my time at NRB has come to a close.”

“I am grieved that the issues that divide our country are dividing Christians,” he said in the statement, adding that he intended to devote himself to “unifying believers around the truth of the Gospel.”

While on “Morning Joe,” Darling said his Christian faith played a key role in his decision to be vaccinated — saying the Bible’s command to love our neighbors informed that decision. The vaccine, he said, helps protect our neighbors from the spread of COVID-19.

Darling also expressed sympathy for those who are hesitant to be vaccinated, seeing it as part of a larger breakdown of trust in American culture.

“When trust goes down,” he said on the show, “belief in conspiracies goes up.”

White evangelical Christians and Hispanic Protestants are among the faith groups most likely to be hesitant or refuse to get the COVID-19 vaccines, according to a recent survey from the Public Religion Research Institute. That study found vaccine hesitancy dropped among many faith groups from March 2021 to June 2021.

Still, 1 in 4 white evangelicals said they refuse to get a vaccine, while an additional 1 in 5 was hesitant, according to PRRI.

Darling criticized those who try to shame people who are vaccine-hesitant or who rejoice when someone who was unvaccinated becomes ill with COVID. Neither of those approaches is helpful, he said on the show.

He also encouraged his fellow evangelicals to consider following his example.

“I do encourage folks to talk to their doctor and really consider it, just because we just don’t want to see anyone else unnecessarily die of this lethal virus,” he said.

In a statement posted on social media, Miller stated that no employee at NRB had ever been terminated for their views on COVID-19 vaccines and that staff had been directed that NRB “stays neutral” about vaccines.

Miller also denied Darling had been fired. Instead, Miller said in his statement that Darling had been offered “a path to another position that would have provided a significant salary and full benefits.”

“He turned that offer down and chose to depart NRB,” Miller said the statement.

However, RNS has confirmed that the letter detailing Darling’s firing specifically cited his appearance on “Morning Joe” and Darling’s statements about vaccines as violations of the “stay neutral” directive.

“The employee is being terminated for willful insubordination,” the letter stated.

Founded in 1944, the NRB “works to protect the free speech rights of our members by advocating those rights in governmental, corporate, and media sectors, and works to foster excellence, integrity, and accountability in our membership by providing networking, educational, ministry, and relational opportunities,” according to its website.

The organization recently emerged from a period of fiscal distress, after operating with a series of significant budget deficits from 2012 to 2018, according to financial disclosures filed with the Internal Revenue Service. In the fiscal year 2018, the NRB had nearly $300,000 more in liabilities than assets. In 2019 and 2020, the organization had more revenue than expenses.

In the past, NRB’s CEO Miller has touted the benefits of vaccines in emails promoting the NRB’s annual convention, which draws thousands of attendees and features a massive exhibition space.

In December 2020, Miller announced that the dates for the convention, originally set for March 2020 in Grapevine, Texas, had been pushed back three months due to the ongoing pandemic. The change in dates, he said, was prompted in part by vaccines, which would help make it possible for the convention to be a “valuable and safe experience for all who attend.”

“With the additional time, increased effectiveness of treatments, and widespread availability of COVID-19 vaccines, June will be much closer to a full return to normal,” he wrote.

Then in May, he announced that vaccines would allow the conference to be held with fewer restrictions, again mentioning the benefit of vaccines.

“Today, I’m excited to share that the Gaylord Texan has updated their mask policy in line with CDC guidelines — vaccinated guests no longer need to wear masks during NRB 2021!” he wrote.

News of Darling’s firing was met with anger and disappointment on social media.

“Words fail,” tweeted author and attorney David French of the Dispatch. “Dan was abruptly fired by a large Evangelical ministry for going on television and sharing why he got vaccinated in the midst of a deadly pandemic.”

“This is insanity,” tweeted ethicist and theologian Russell Moore, Darling’s former boss at the Southern Baptist Convention’s Ethics and Religious Liberty Convention.
Darling, an ordained minister and author of a number of books, including “A Way with Words” and “The Dignity Revolution,” joined the NRB in April of 2020, following six years at the ERLC.

Darling still believes in the mission of the NRB and his statements about vaccines, his authorized source told RNS.

In his August USA Today editorial, Darling said vaccines save lives and encouraged his fellow Christians to consider being vaccinated before more lives are lost.

“There are not many things in the world today that are worthy of our trust, but I sincerely believe the COVID-19 vaccine is one of them,” he wrote. “As a Christian and an American, I was proud to get it.”

A previous version of the story reported that a source said Darling was asked to recant his statements. After publication, the source told RNS that Darling refused to sign a document saying his pro-vaccine statements were insubordinate. The story has been updated with a statement from Darling.

RELATED: They refused vaccines but they still want our empathy