WASHINGTON (RNS) — The prelate who oversees Catholics in the U.S. military issued a statement Tuesday (Oct. 12) supporting service members who have refused to get vaccinated against COVID-19 on religious grounds.

Archbishop Timothy P. Broglio, head of the Archdiocese for Military Services in the U.S., was responding to the recent mandate from Pentagon officials requiring armed services personnel to get inoculated against the disease that has killed more than 714,000 Americans, according to the Centers for Disease Control.

“This circumstance raises the question of whether the vaccine’s moral permissibility precludes an individual from forming a sincerely held religious belief that receiving the vaccine would violate his conscience. It does not,” Broglio wrote.

While noting widespread support for COVID-19 vaccination among the Catholic hierarchy, Broglio pointed to concerns raised in some Catholic circles about the use by vaccine manufacturers of cells originally derived from tissue from an aborted fetus in the 1970s and 1980s. Broglio acknowledged the U.S. Conference of Catholic Bishops and Vatican officials have published statements concluding that it is morally acceptable for Catholics to take the vaccines in a pandemic. Even so, the archbishop insisted, freedom of conscience remains paramount.

“Individuals possess the ‘civil right not to be hindered in leading their lives in accordance with their consciences,’” he wrote, citing Pope Paul VI. “Even if an individual’s decision seems erroneous or inconsistent to others, conscience does not lose its dignity. This belief permeates Catholic moral theology as well as First Amendment jurisprudence.”

Broglio added: “The denial of religious accommodations, or punitive or adverse personnel actions taken against those who raise earnest, conscience-based objections, would be contrary to federal law and morally reprehensible.” 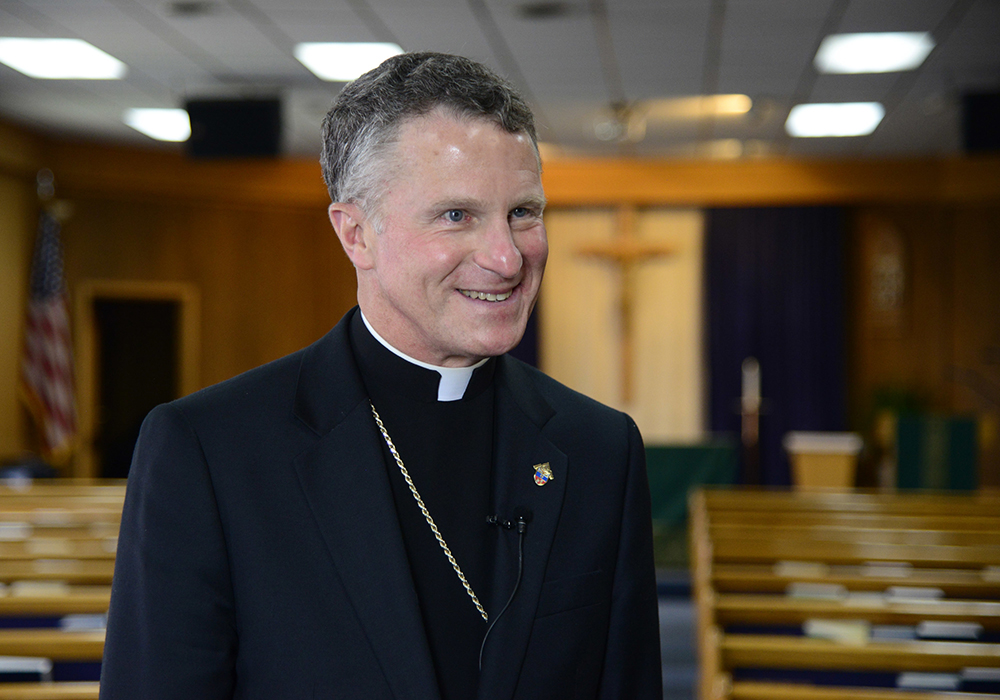 Recent data published by government officials and a report from The Washington Post indicate most active-duty military members are already fully inoculated against COVID-19. More than 90% of Navy personnel and more than 81% of Army and Air Force personnel have gotten the shots (the Air Force’s data includes members of the newly created Space Force), as have most (76.%) active-duty members of the Marine Corps.

But Broglio’s message comes as several branches of the military approach looming deadlines for vaccine COVID-19 mandates: Active-duty Navy and Marine Corps members must be inoculated by Nov. 28, Air Force members by Nov. 2 and Army by Dec. 15.

Meanwhile, vaccination among reserve units of the military lags behind active-duty members. Members of the Marine Corps Reserve are expected to be vaccinated by Dec. 28, but so far only 35.5% have complied.

While there has been back-and-forth about vaccines in American Catholic circles, an array of powerful U.S. bishops and archbishops — including the current president of the U.S. Conference of Catholic Bishops — have declared that they will not issue religious exemptions for Catholics.

Pope Francis has described getting vaccinated against COVID-19 as “an act of love.” The Vatican even has its own “green pass” vaccine mandate: All individuals wishing to enter the city-state must provide evidence they have received at least one dose of the vaccine, tested negative for the coronavirus or recovered from the disease. Those who refuse to get vaccinated must pay out-of-pocket for COVID-19 tests.

The Swiss Guard, which is tasked with protecting the pope, was even more strict, requiring vaccination for all members. Among its small force of 135, three ultimately refused and resigned their posts.