(RNS/AP) — Jacki King, the women’s minister at Second Baptist Church in Conway, Arkansas, first felt a call to ministry as a college student.

She decided to follow it, giving up her pre-med major and her spot on a college softball team for ministry training at a small Bible school with a mostly male student body. She picked Criswell College because it was where her pastor was a dean. She wanted to teach the Bible the way he did.

King thought at the time she only had two options for ministry — marrying a pastor or serving as an overseas missionary.

“I really didn’t want to be married to a lead pastor,” she said.

But God, as the saying goes, had other plans.

She met Josh King, an aspiring preacher at Criswell, fell in love and married him. They went into ministry together with his pastor role opening doors for her. Today, King is an author as well as a Bible teacher, and worries that too much of the conversation about women’s roles in the church is focused on what they cannot do — namely, serve as senior pastor in a Southern Baptist church — rather than what they can do.

The Bible shows women and men as partners and portrays women leading in the early church, King said, pointing to Phoebe, who is mentioned in the New Testament book of Romans, along with other women leaders.

“Women are part of the Great Commission,” she said, a reference to Jesus’ command to spread his teaching around the world.

Few congregations could function without the work of female members. Still, there is tension in the Southern Baptist Convention over the role of women, mainly over how to put a section of the denomination’s statement of faith, known as the Baptist Faith and Message, into practice. That section, based on the SBC’s interpretation of Bible verses like 1 Timothy 2:12 and Titus 1:5-9, deals with leadership in churches.

“While both men and women are gifted for service in the church, the office of pastor is limited to men as qualified by Scripture,” the statement reads. But local Southern Baptist churches, because they are governed autonomously, are free to decide how to implement that teaching.

For some in the nation’s largest Protestant denomination, the statement of faith means the senior pastor must be a man, but staff and other pastoral roles can be filled by women, including teaching the Bible to both men and women. For others, pastoral duties, especially preaching, are limited to men, and women are only allowed to teach the Bible to other women and children.

These two views clashed in spring 2019, when Beth Moore, then a beloved Southern Baptist women’s Bible teacher, tweeted about speaking at a Mother’s Day church service. It led to a social media firestorm and renewed criticism of women preachers and teachers from more conservative Southern Baptists. In the spring of 2021, Moore left the SBC, citing a number of concerns, including how the denomination has handled sexual abuse allegations, as well as sexism and racism within its ranks.

“At the end of the day, there comes a time when you have to say, this is not who I am,” she told Religion News Service at the time.

This ongoing fight has left some women leaders who feel called to ministry in a bind. 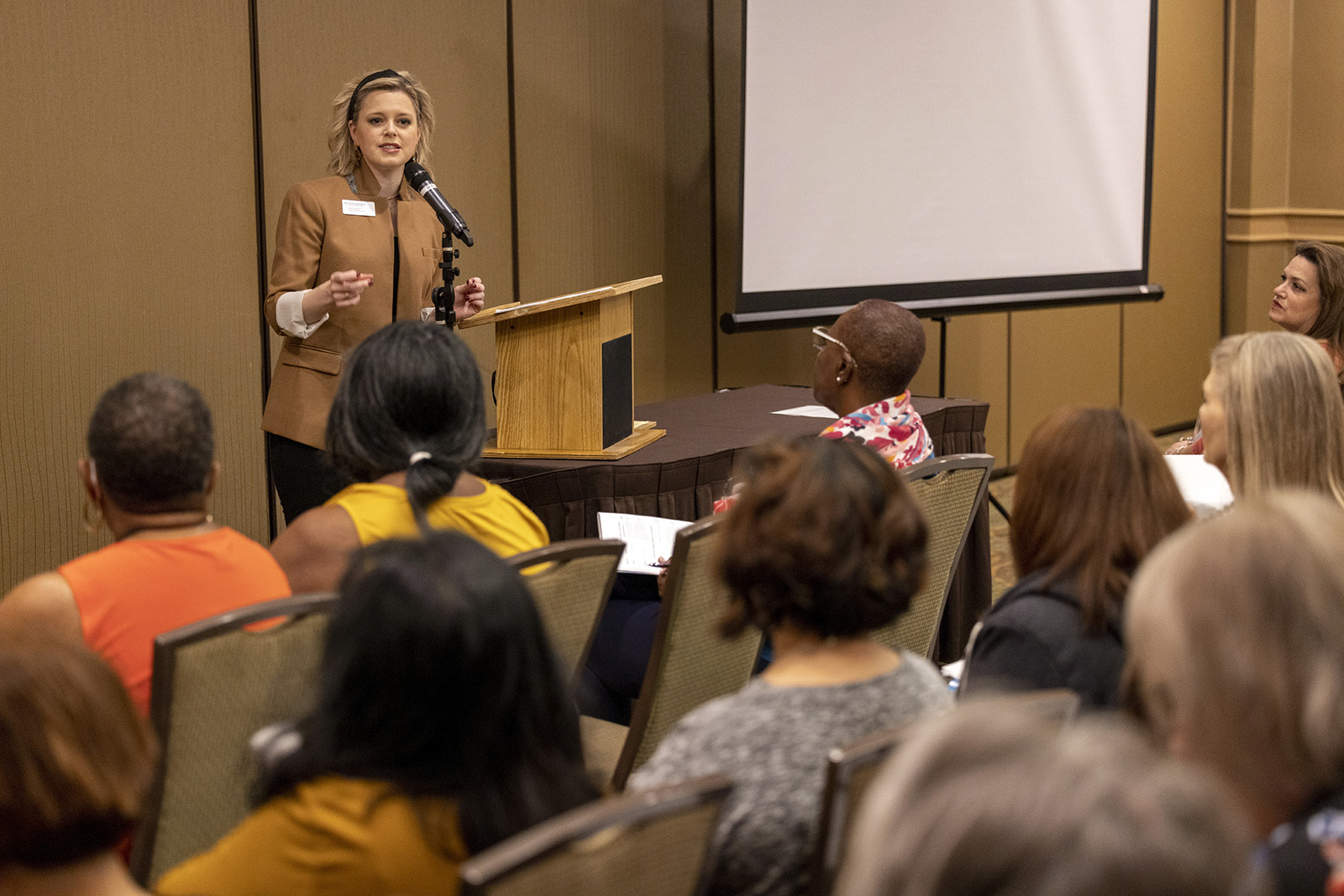 In this photo provided by Jerry Neil Williams of Texas Baptist, Katie McCoy lectures at the 2021 Texas Baptist Annual Meeting in Galveston, Texas, on Nov. 16, 2021. McCoy led a workshop titled, “Beyond the Mask: Ministry to Women in a Post-COVID World.” (Texas Baptist via AP)

“Until we stop debating or demanding an ever-narrowing conformity, we will continue to circle a revolving door of unnecessary controversy,” said Katie McCoy, a women’s ministry director for a state convention and former seminary professor, in an email.

Jacqueline Scott, a member of Dorrisville Baptist Church in Harrisburg, Illinois, and women’s Bible study teacher, said being a leader is a natural outgrowth of her faith, and she has always felt called to encourage people to reach their potential.

“I’ve realized that being a leader is just something that is almost ingrained,” she said. “You don’t even realize that you’re doing it.”

Scott believes her faith frees her from some of the limitations society puts on her gender. But she said Christians put up boundaries too, restricting what people can do for God and how they share the Gospel — forgetting everyone has a place in the church’s mission.

Still, Scott believes the Bible limits the role of pastor to men and she thinks they are better suited for that role. “On the other hand, do I believe that women can be preachers?” she said. “Yes, I do.”

In 2019, King, McCoy and other faithful Southern Baptists launched the SBC Women’s Leadership Network to foster female leaders across the evangelical denomination.

“I get to have tons of conversations with women across our convention about … how they’re serving and how their creativity and resilience is changing communities and schools and churches,” King said. “None of that is platformed. None of that is shared to the world.”

King pointed to the examples of Lottie Moon and Annie Armstrong, legendary missionaries in Southern Baptist life. Two of the largest denomination-wide offerings are named after the women.

Leadership is more than high-profile ministries, McCoy said. It can look like women hosting college students for the holidays, mentoring young moms and organizing community service projects, she said. 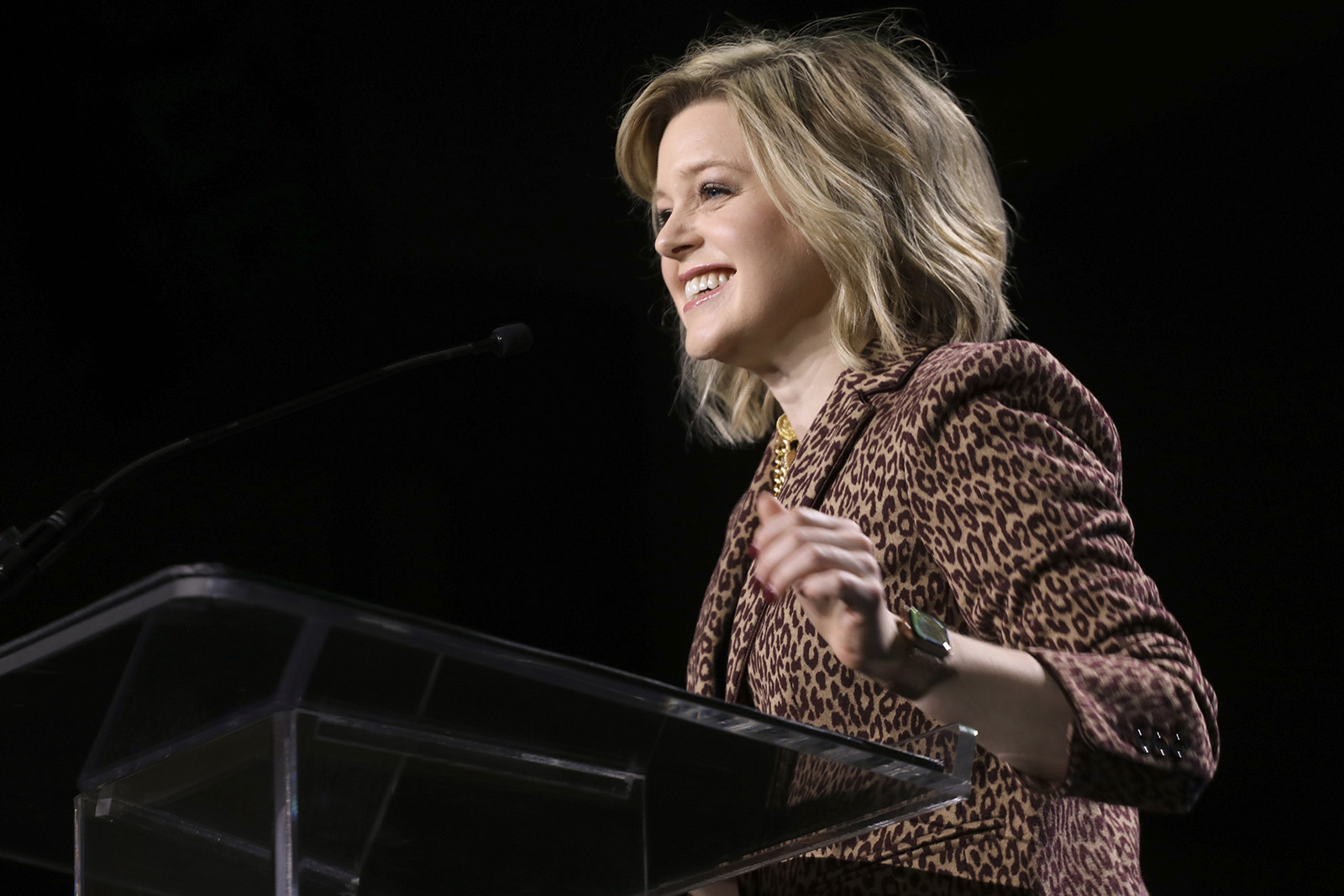 In this photo provided by Jerry Neil Williams of Texas Baptist, Katie McCoy leads prayer and reads scripture as she begins the first worship session of the 2021 Texas Baptist Annual Meeting at the Galveston Island Convention Center in Galveston, Texas, on Nov. 16, 2021. In 2019, King, McCoy and other faithful Southern Baptists launched the SBC Women’s Leadership Network to foster female leaders across the evangelical denomination. (Texas Baptist via AP)

Called to ministry at 22, McCoy, who holds a doctorate in systematic theology, said her parents, professors and peers encouraged her to pursue leadership in Baptist life. Today, she is the new women’s ministry director for Texas Baptists, recently making the jump from an SBC seminary to the state convention.

Texas Baptist churches seemed to have worked out how to cooperate despite their differences over the role of women, and they do it “without the controversy — or perennial acrimony — the SBC experiences,” McCoy said. It is a local church matter and not a test issue for joining the state convention, she said.

“Many of our 5,300 churches are just as conservative as the SBC, affirming the same confessional documents,” McCoy said, adding that others allow women to preach or teach, but limit pastor and elder positions to men.

RELATED: Here’s how Southern Baptist women found ways to lead outside the denomination

When McCoy previously worked at Southwestern Baptist Theological Seminary in Fort Worth, Texas, she said she felt valued by the administration and supported by President Adam Greenway but felt limited as an employee of an SBC seminary.

“I felt that, as a woman, I couldn’t grow beyond where I was,” McCoy said.

Despite her credentials, McCoy knew teaching in the School of Theology wasn’t an option. It would be, she said, “at best, fodder for the next alarmist documentary, and at worst, a call for investigations and resignations” at the SBC’s national gathering.

“If the SBC ever looks around and realizes it has lost a generation of women leaders, it won’t be because those women drifted into liberalism. It will be because they’re exhausted,” she said.

Instead, McCoy was named an assistant professor of applied theology and women’s studies, but in the School of Educational Ministries, which prepares students for church ministry more practically. She doesn’t fault Greenway.

“I do, however, fault a religious culture that so caters to its fundamentalist fringe that it views women teaching theology courses as a more imminent threat to its doctrinal purity than decades of infighting and rancor,” McCoy said.

Ashley Allen, a women’s ministry professor and the director of news and information at Southwestern seminary, does not feel restricted by the denomination’s beliefs. 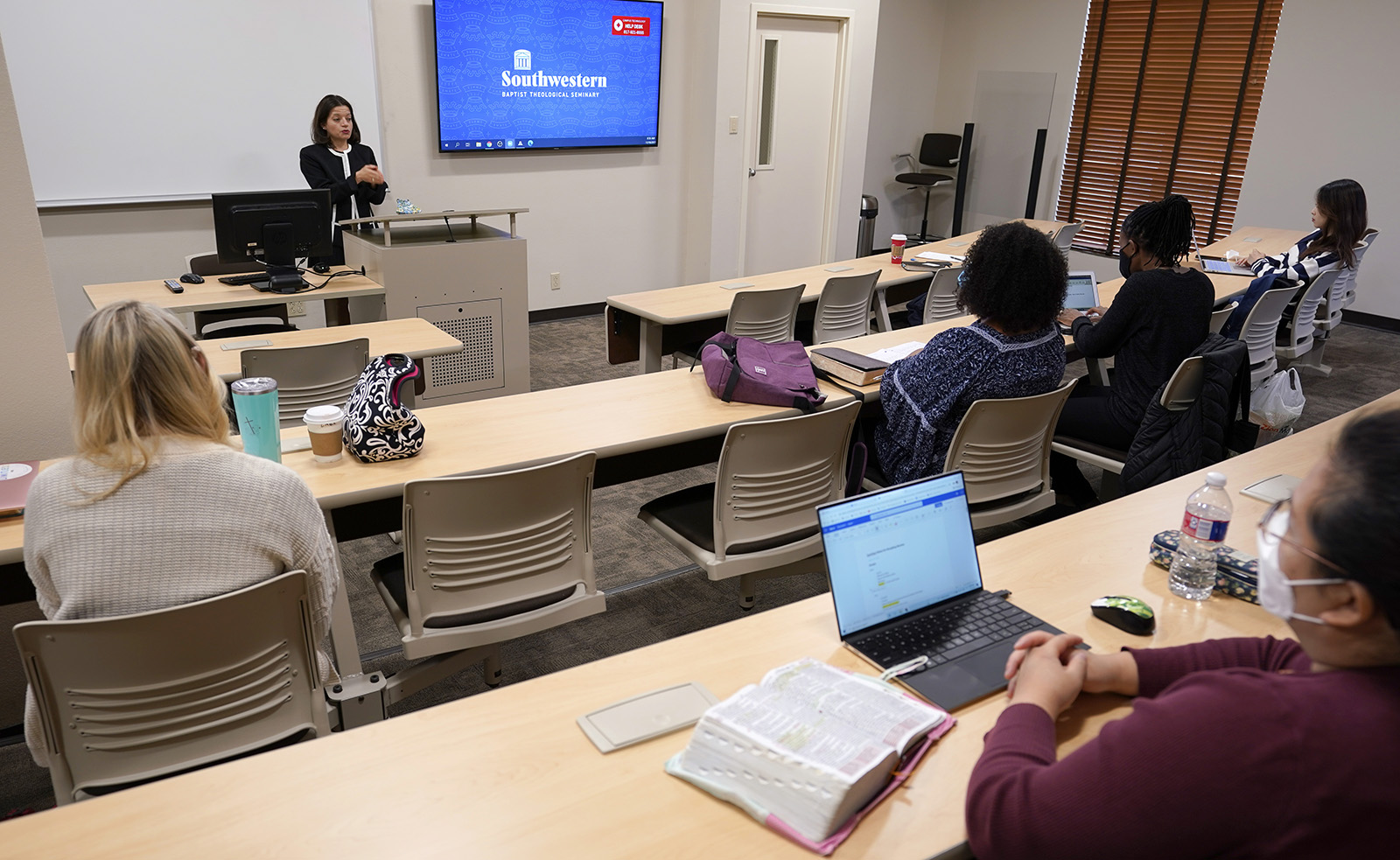 “I abide by what Scripture says,” Allen said. “But at the same time, Scripture provides opportunities for me as a woman.”

In college, Allen knew she was being called to a Christian vocation, but she refined that calling through the example and guidance of the ladies at her church — many of whom didn’t carry a title.

“They were what I define leadership to be now, which is influencing,” Allen said. “When you are influencing somebody else, you’re leading them — good or bad.”

Men, including a seminary dean, a professor and a state convention leader, also championed Allen along her career path. Allen said they invested in her, ran interference and recommended her for different positions.

Today Allen is doing the influencing, and she would like to see more women in Southern Baptist life fostering leadership among their peers in “whatever it may be, but really coming alongside those ladies and giving them opportunities to be able to serve and to use their gifts.”