WASHINGTON (RNS) — As the ruthlessly contagious omicron coronavirus variant blazed through the Washington, D.C., area over the past week, the Rev. Timothy Tutt hastily scheduled a series of conversations with leaders of Westmoreland United Church of Christ.

“There was obviously sadness and frustration, a sense of ‘Oh, no, here we go, again,’” he said.

The church had already canceled its late-night Christmas Eve service and planned to convene its one remaining service that day outdoors — partly to accommodate the presence of children not yet eligible to be vaccinated, partly to allow live sheep to roam around during the Christmas pageant. But as coronavirus cases in the city continued to rise, the congregation decided more action was needed: On Wednesday morning (Dec. 22), leaders announced Sunday services would be virtual for at least the next two weeks.

Churches across the country have made similar decisions in the wake of the omicron variant, with pastors and congregations wrestling with whether to continue in-person worship services during a major Christian holiday or to revert back to virtual services that were a hallmark of the early pandemic.

“We want people to be safe, feel safe, and to not feel they have to go somewhere that puts their health at risk,” Tutt told Religion News Service. “We think it’s one way that we can show that we love God and love our neighbors by not exposing people to potential risks — risks they may then expose to others.” 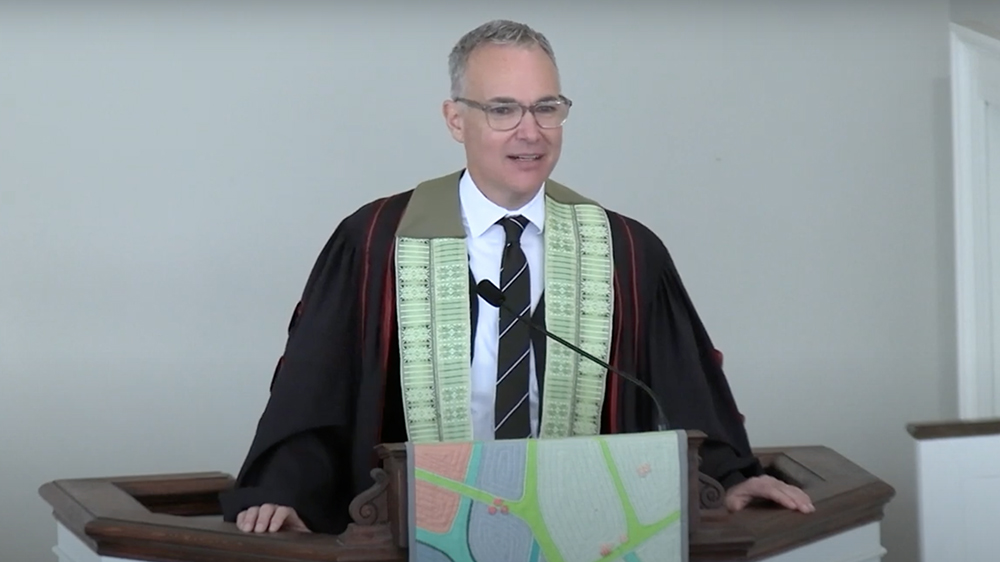 The push for online services has been especially strong in and around Washington, where COVID-19 case rates are currently the highest in the country, according to The Washington Post. Although the area is heavily vaccinated compared with many states and early evidence suggests COVID-19 cases caused by the omicron variant may be milder, experts still fear the lighting-fast spread of the virus could wreak havoc on unvaccinated or immunocompromised populations.

On Tuesday, the Washington National Cathedral — whose policies often set the tone for churches in the area — announced alterations to a litany of planned services. The cathedral intended to scale back some, shift a few online and cancel at least two altogether.

But by Wednesday evening, officials said they were moving all services online during the holiday season.

“As one of the largest churches in America, we routinely welcome more than 15,000 people to celebrate the Christmas holiday,” read a statement from the Very Rev. Randolph Marshall Hollerith, dean of the cathedral. “However, given the spike in infections, I simply cannot justify gathering massive crowds as the public health situation worsens around us.”

The move follows a similar announcement by St. John the Divine, an Episcopal cathedral in New York City, where cases are also skyrocketing. The church announced Tuesday that it would move Christmas services to a virtual format.

“As the Cathedral has done before, placing the needs and concerns of the wider community first is crucial,” read a statement on the cathedral’s website.

For the Rev. Ashley Goff, pastor of Arlington Presbyterian Church in Virginia, the issue was hashed out in a conversation she had with the church’s music minister earlier this week. Guided by what she calls a “theology of neighborliness,” she said they pored over local health data, which showed a COVID-19 test positivity rate far above what the church deems acceptable for gathering. They also considered the plight of local hospitals, which experts warn could soon be overrun with patients as the virus continues its unprecedented spread.

Ultimately they were left with the question: “Are we fighting against omicron or enabling it?”

They decided to move services online, she said, because “who we are, how we show up in the world, has the well-being of the neighbor at the center.” 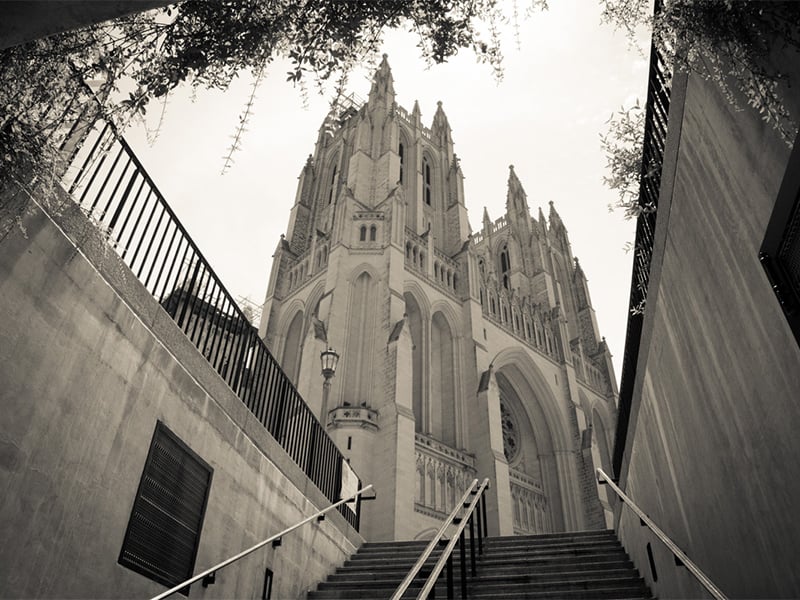 The Washington National Cathedral in 2015. RNS photo by Sally Morrow

Some churches made the shift even earlier. Washington’s Union Temple Baptist Church posted a Facebook announcement on Saturday declaring all services would be virtual for the rest of the year “due to the rise in COVID cases and out of an abundance of caution.”

Other congregations are sticking with existing plans to worship in person, however. The Basilica of the National Shrine of the Immaculate Conception, a sprawling Catholic house of worship in Washington, told RNS it is requiring masks but otherwise intends to hold in-person Mass on Christmas Eve and Christmas Day. The Archdiocese of Washington, which oversees the church, currently recommends abiding by local mask guidelines but has otherwise not suggested dramatic changes to worship.

Meanwhile, faith leaders such as the Rev. Tony Suarez, who runs Revivalmakers and serves as chief operating officer of the National Hispanic Christian Leadership Conference, expressed resistance to the idea of suspending in-person worship. He insisted the virus is “real,” noting he contracted COVID-19 in July 2020, and urged people who feel sick to stay home. But as a traveling evangelist, he said he plans to preach on Sunday in what he hopes will be a packed church in Kingsport, Tennessee.

“For me, personally, I just don’t understand why there would be any type of concern with worshipping together at this point.”

He acknowledged differences among Christian traditions, saying evangelical Christians and members of the “charismatic, Word of Faith, Pentecostal” community operate in “a very different world than mainline Christianity right now” when it comes to COVID-19 and in-person worship.

“Theologically speaking, I don’t see Jesus not walking into a leper colony. I don’t see him not engaging the sick and praying for them,” he said. He claimed inspiration from famous evangelists of the past, saying, “I don’t see where Oral Roberts or A. A. Allen or Aimee Semple McPherson or R.W. Schambach ever canceled a tent revival or a healing meeting because of tuberculosis or any other kind of outbreak.”

Other churches have taken a dramatically different approach. A representative for Metropolitan AME, a historic Black church in downtown Washington, told RNS the congregation doesn’t have to shift to online services — because it has not resumed meeting in person since March 2020, when the congregation first switched to virtual worship.

Similarly, Tutt noted that while many Westmoreland members celebrated a return to in-person worship earlier this year, the church has maintained an online component as part of a “hybrid” model. The result: a congregation that has found spiritual meaning in both physical and virtual spaces, he said, a dynamic he hopes will soften the blow of a sudden return to virtual worship.

“There’s a subset of congregations — and I would put Westmoreland in this list — who are like, ‘During the pandemic, we’ve learned how to connect online really well,’” he said. “We now have an online congregation that reaches across the country and around the world.”

He added: “People of this congregation — and so many other people of faith — have great reserves of patience, and creativity, and flexibility and grace. … What we’re reminding ourselves is that those reserves continue to be deep.”

As for the difficulty surrounding this season, Tutt said it reminds him of the Christmas story, where Jesus was born into “a very troubled world” with “a whole lot of problems.”