(RNS) — Texas Gov. Greg Abbott tweeted Saturday night that all hostages were safe after an 11-hour standoff inside a Dallas-area synagogue.

“Prayers answered. All hostages are out alive and safe,” Abbott tweeted at 9:33 p.m. Central Saturday (Jan. 15). Details about the rescue were not clear, but a source at the scene said the hostage taker is dead.

Abbott’s tweet came not long after a loud bang and what sounded like gunfire was heard coming from the synagogue, according to The Associated Press.

Police officers, FBI and a SWAT team were called to Congregation Beth Israel in Colleyville, Texas, shortly after noon following reports that a man had apparently taken four people hostage, including the rabbi. The hostage-taker’s identity had not been released as of Saturday evening.

Police were alerted by a rabbi in New York City, who had received a call from the rabbi believed to be held hostage in the synagogue, a law enforcement official told AP. The rabbi in New York called 911 to report the call.

Congregation Beth Israel had been holding online services when a man could be heard shouting on the livestream. Residents in the immediate area were evacuated.

An interfaith team of local clergy worked with the negotiators and assisted relatives of the hostages throughout the ordeal, including Pastor Bob Roberts, a co-founder of Multi-Faith Neighbors Network; Rabbi Andrew Paley of Temple Shalom Dallas; and Imam Omar Suleiman, president of the Yaqeen Institute for Islamic Research. Suleiman is a columnist for Religion News Service.

Shortly after 5 p.m. police reported that one hostage had been freed and did not require medical attention. That person was not the rabbi.

Authorities are still trying to discern a precise motive for the intruder’s actions. According to AP, the hostage-taker was heard demanding the release of Aafia Siddiqui, a Pakistani neuroscientist suspected of having ties to al-Qaida, who was convicted of trying to kill U.S. military officers while in custody in Afghanistan. The intruder also said he wanted to be able to speak with her, according to the officials. Siddiqui is in federal prison in Texas.

Initial reports that the hostage-taker was related to Siddiqui were incorrect, according to a source close to the case.

The congregation, on Pleasant Run Road, is a Reform synagogue of about 125 families. Its first and only rabbi, Charlie Cytron-Walker, has been with the synagogue since 2006. He was apparently conducting virtual services along with three others when the intruder walked in.

Texas resident Victoria Francis told the AP that she watched about an hour of the livestream before it cut out. She said she heard the man rant against America and claim he had a bomb.

“He was just all over the map. He was pretty irritated and the more irritated he got, he’d make more threats, like ‘I’m the guy with the bomb. If you make a mistake, this is all on you.’ And he’d laugh at that,” she said. “He was clearly in extreme distress.”

Francis, who lives in Rhome, Texas, and grew up near Colleyville, tuned in after she read about the hostage situation. She said it sounded like the man was talking to the police department on the phone, with the rabbi and another person trying to help with the negotiations.

The Dallas Bureau of Alcohol, Tobacco, Firearms and Explosives tweeted that it was assisting the Dallas FBI and the Colleyville Police Department. 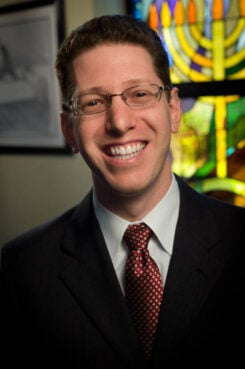 The Council on American-Islamic Relations, a Muslim civil rights and advocacy group, strongly condemned the hostage-taking.

“We stand in solidarity with the Jewish community, and we pray that law enforcement authorities are able to swiftly and safely free the hostages,” said CAIR National Deputy Director Edward Ahmed Mitchell. “No cause can justify or excuse this crime.”

Synagogue safety has been a growing concern for American Jews ever since the October 2018 massacre in Pittsburgh, when a gunman walked into the Tree of Life Synagogue and killed 11 people.

Several groups have arisen to train volunteers to provide physical security for synagogues and assess their vulnerability to attack. More than $100 million in homeland security grants were awarded last year to Jewish institutions across the country to secure their buildings, install cameras and gates and take other protective measures. Some states have their own additional grant programs.

Cytron-Walker, the congregation’s rabbi, is a Michigan native. He is married to Adena Cytron-Walker and they have two daughters.

He attended Hebrew Union College-Jewish Institute of Religion at its Jerusalem and Cincinnati campuses, receiving his rabbinical ordination in 2006, according to the congregation’s website.

Congregation Beth Israel was created in 1999 and did not have a full-time rabbi until Cytron-Walker was hired. The congregation initially met at Good Shepherd Catholic Community nearby until the building was constructed.

Colleyville is a city of about 26,000 residents, about 15 miles northeast of Fort Worth.

Lindsey Weiss, who has attended the synagogue since she was 11, but recently moved away, said Cytron-Walker is a wonderful man.