(RNS) — On Saturday morning (Jan. 15), my wife and I were in the car with our kids in the back seat when we heard from a friend that there was a hostage situation in Colleyville, Texas, involving a rabbi.

I’m an imam in Irving, a half-hour drive from Colleyville. We checked Congregation Beth Israel’s Facebook page. There were still only a few hundred viewers — word had not spread yet that a real-life hostage taking was being livestreamed.

It was becoming clear from the hostage-taker’s ramblings that he was a Muslim. I immediately reached out to two Dallas rabbis I know, Nancy Kasten and David Stern, to offer comfort. In recent years, when any place of worship is attacked anywhere in the world — often by white supremacists — clergy in the Dallas area call each other in solidarity.

When a mosque in Christchurch, New Zealand, was attacked, faith leaders and congregations immediately came to our side, as they did after the (now thankfully obsolete) Muslim travel ban. But it could also be a Jewish temple or an AME church. The solidarity is the same.

My next thought was to offer my help to negotiators in calming the man down. So I dropped off my family and as I drove to Beth Israel, I got a call from Nancy and David, who advised me to wait until law enforcement knew I was coming: Though nothing was known about the perpetrator, they were concerned that if law enforcement officers saw a man wearing a kufi and beard they might make the wrong assumptions.

They weren’t wrong. I waited as Raed Sbeit, a dear friend and a local Muslim leader, and Pastor Bob Roberts, who leads nearby Northwood Church, made some calls to the police. With their connections made, I was admitted to Good Shepherd, the Catholic church across the street from Beth Israel, where the police had established a command center of sorts.

The word, by this point, had gotten out, and my phone was filling up with texts — most of them false speculation: “Did you hear there is a Palestinian man there!” “There is a guy who just blew himself up in a synagogue!” “What’s going on in Texas?” 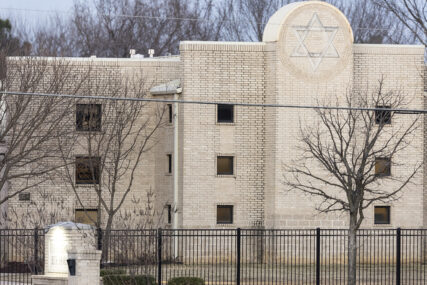 The Congregation Beth Israel synagogue is shown Jan. 16, 2022, in Colleyville, Texas. A man held hostages for hours Saturday inside the temple. The hostages were able to escape and the hostage taker was killed. FBI Special Agent in Charge Matt DeSarno said a team would investigate “the shooting incident.” (AP Photo/Brandon Wade)

But when I saw Rabbi Charlie Cytron-Walker’s wife and daughter, who were there at Good Shepherd, nothing else mattered but getting the hostages out. There was nothing political in our discussions — no talk of terrorism or how the local community would deal with the event. Our discussion was all pastoral, which was enough: What do you say to a wife and daughter who are wondering if they’ll ever see their husband and father again?

Meanwhile, the negotiations continued across the street. I can’t talk about specifics because the criminal investigation is still going on.  I can only say that the goal was to make sure Charlie’s wife and daughter wouldn’t need to worry much longer.

At about 6 p.m., shortly after the first hostage was freed, two Pakistani Muslim women were allowed into the church. They were members of an interfaith group Charlie belonged to. They hugged Charlie’s wife and daughter for a long time, all four of them crying, and all of us watching and crying as well. These weren’t people who had just met at an interfaith dialogue. They were close family friends.

They had brought a dinner of samosas — filled dough pockets that are a staple in South Asia. Charlie’s wife laughed for a moment, saying that these women’s samosas were his favorites. If he wants some, she joked, he needs to get out alive. The women tearfully assured her that inshaAllah (God willing), he would get to share dinner with them.

God answered those prayers. Just as the standoff between the hostage-taker and the police was becoming more worrisome, we heard a commotion.

“Did you hear that explosion?” someone said. “Do you hear the gunshots?”

We held our breaths a few minutes, anticipating the worst. Some couldn’t hold back tears of sadness.

Hugs and praise and prayer. The hostages all went home.

But neither they nor their families will ever be the same. None of us will. Our Jewish neighbors, especially members of that congregation, will be even more scared to go to their synagogues. Muslims, worried about a backlash, will worry about security in their mosques.

In Dallas, after the cameras and attention move on, we will care for those affected and break bread together, inshaAllah.

We will live in hope that we don’t have to keep living our lives wondering when the next tragic mass shooting or attack on a place of worship will make us gather us for a vigil we’re all tired of attending.