(RNS) — The day in early 2001 when Danny Awad picked up his fiancee from Israel’s Ben Gurion Airport to take her home to meet his family in Bethlehem, he got a call from his father.

Take your time, his father told him. The situation here isn’t safe. Danny made up an excuse to stop until the shooting in his neighborhood had quieted down.

It was not the last detour his bride-to-be, Jocelyn Libalib, would take in her 20 years living in the Palestinian territories. Since their marriage two decades ago, Libalib-Awad has been unable to leave her and Danny’s Bethlehem home for fear of deportation.

“Last November my father passed away in the Philippines and I wanted to go to attend the funeral and the wake but I was unable to go for fear of not being able to return. I didn’t want to leave my family,” she said.

But in January, Israel’s Supreme Court ordered an end to a policy based on a lapsed 2003 law that denied residency to spouses of Arab citizens of Israel. The court ruled that barring Israeli citizens and their spouses from the Palestinian territories from living together constitutes unlawful discrimination.

Libalib-Awad, known as Joy, finally received a visa allowing her to live legally in the city where her husband lives and where her children were born, and, more importantly, to leave with the right to return home. Her name was listed among the 500 individuals whom Israel granted permission to their family reunification request. “When we saw her name on the list we were extremely happy,” said Danny Awad, now pastor of the Baraka Presbyterian Church in Bethlehem.

Awad told Religion News Service that he and his family are the fortunate ones. “While we are happy to be able to move around freely, we know thousands of families are still suffering because of Israel’s policies,” he said.

In a May 2006 report, Human Rights Watch said that the legislation — the Citizenship and Entry into Israel Law (Temporary Order) 2003 — “discriminates against Palestinian citizens and permanent residents of Israel on the basis of their ethnic or national origin. Palestinian citizens of Israel constitute the vast majority of Israelis who are married to Palestinians from the Occupied Palestinian Territories.”

Article 13 of the Universal Declaration of Human Rights states: “Everyone has the right to leave any country, including his own, and to return to his country.” 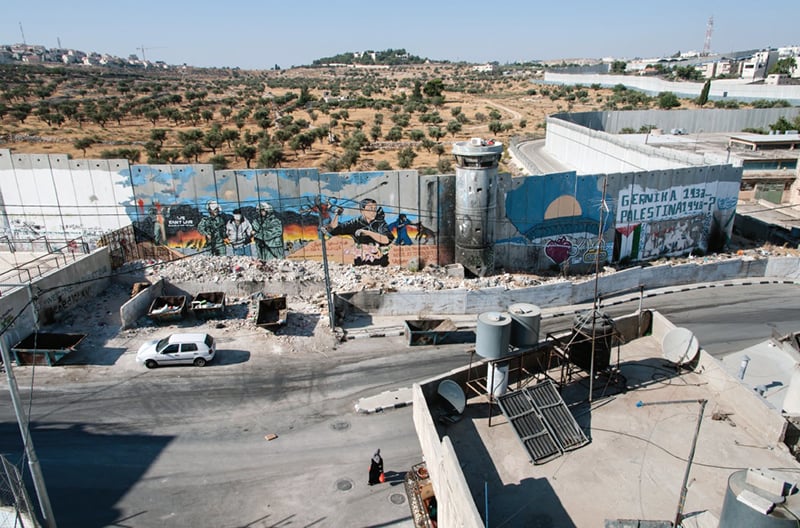 The Israeli separation wall divides Aida Refugee Camp from adjacent olive groves on land belonging to the West Bank town of Bethlehem on June 15, 2016. The Israeli settlement of Gilo continues to expand on a nearby hillside.
Photo courtesy of Creative Commons/Palestine Israel Ecumenical Forum

Passed by the Knesset during the Palestinian uprising known as the Second Intifada, the law was aimed at preventing Palestinians from the occupied territories from marrying into Israeli citizenship or residency rights. The law followed a provision of the Oslo Accords signed in 1993 on the White House lawn that allowed the interim Palestinian Authority to issue passports and residency ID cards only with the approval of Israel.

Normally, foreign nationals married to Israeli citizens undergo a graduated process of residency statuses, with security checks along the way, before ultimately being considered for citizenship after a minimum of four years. If the foreign spouse is Jewish, or the child or grandchild of a Jew, Israeli citizenship is granted automatically.

The case of the Awads and others like them was much less controversial. They were not seeking citizenship in Israel, just the right to live with their Palestinian spouses in areas occupied by Israel. They were caught up in the law all the same.

One family that celebrated along with the Awads is the Qumsieh family, who also received residency 45 years after arriving from Chile. Without valid documents, they weren’t allowed to cross Israeli-controlled borders and were given a hard time at checkpoints even within the West Bank.

“I arrived from Chile with my parents when I was five years old and my Chilean mother and I have suffered a lot all these years in which we had no identification papers which meant that she couldn’t pursue her studies or carry out any activity that required a legal ID,” Payla Arenas-Qumsieh, who lives in Beit Sahour, told the website Maghtas.com.

While Arenas-Qumsieh is happy to have been included in the family reunification list, she is worried about her daughter, who left in 2018 to study abroad and whose name was not on the list.

But she is grateful that she can at last feel she has a home. “Palestinians used to refer to me as ‘the Chilean,’” she told Maghtas, a website covering the affairs of Palestinian Christians, “and when I would visit relatives in Chile they would refer to me as the Palestinian, even though I didn’t have either Palestinian or Chilean legal documentation of nationality.”