LANSING, Mich. (AP) — Michigan authorities on Wednesday (March 9) announced the first criminal charges stemming from the state’s review of child sexual abuse lawsuits against the Boy Scouts of America, charging a former troop leader before his release from a New York prison on separate crimes.

Mark Chapman, 51, is accused of sexually assaulting two boys at the time he was a scoutmaster in the Detroit suburb of Roseville, where he also worked in and attended The Church of Jesus Christ of Latter-day Saints.

Starting in 2000, one victim was abused at the church — where the troop sometimes met — and other places from the time he was 13 or 14 until he was 17, Michigan Attorney General Dana Nessel said. The second victim was assaulted for years beginning when he was about 11.

One of the men called a tip line.

“It’s not just important for us to hold the person accountable for all the harm that was suffered by the victims … but to prevent future crimes from occurring,” Nessel said at a news conference in Detroit. The charges, she said, “are only the beginning.”

Chapman, who is due to be paroled in New York this week after serving more than nine years for child abuse convictions there, was charged now so he cannot leave the criminal justice system, she said. Authorities were working to extradite him to Michigan.

The Associated Press could not immediately determine if Chapman has a lawyer.

The attorney general’s office and the Michigan State Police last year launched a joint review of what now are 5,000 civil claims forwarded by the Boy Scouts. A completed review of 550 claims resulted in roughly 60 inquiries being sent to state police for further investigation.

The Boy Scouts last month reached a tentative settlement with a bankruptcy committee representing more than 80,000 men who say they were molested as children by Scout leaders and others. All told, the compensation fund would total more than $2.6 billion, which would be the largest aggregate sex abuse settlement in U.S. history.

Also Wednesday, Nessel gave an update on a yearslong probe of sex abuse by clergy in the Roman Catholic Church. It has resulted in 11 prosecutions.

The office has reviewed all but 245,000 of 5 million paper and digital documents from Michigan’s seven dioceses. The review has identified 454 accused priests and 811 reported victims, she said. 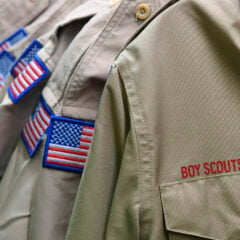