(RNS) — At least four self-identified survivors of abuse by Mark Rivera, a former Anglican Church of North America lay minister, spoke out against ACNAtoo, the anti-abuse advocacy group that has advanced charges against Rivera since last year, saying in a statement released Saturday (March 12): “ACNAtoo does not speak for us. We would like to be heard for ourselves.”

Shared via a new Twitter account called BelieveUsToo, the statement asked ACNA’s archbishop and College of Bishops to reinstate Bishop Stewart Ruch III of the church’s Diocese of the Upper Midwest, who began a leave of absence in July after saying he made “regrettable errors” in handling the allegations.

The BelieveUsToo statement said Ruch and the Upper Midwest Diocese have been unfairly blamed for Rivera’s abuse, and also claimed ACNAtoo co-founder Joanna Rudenborg is “unfit” to be a victim advocate.

ACNAtoo launched in June 2021 as Rudenborg made rape allegations against Rivera, who had already been charged with multiple counts of felony child sexual abuse and sexual assault. The group accused Ruch of delaying public disclosure of the allegations and asked for an independent investigation into the diocese’s handling of the case. In January, a designated response team named a law firm to lead it.

But days later, three members of the response team in charge of victim care — and who were not employed by ACNA — resigned, saying the team had “downplayed” abuse survivors’ needs. ACNA proceeded with the investigation and announced a parallel investigation into abuse of ecclesial power through a separate firm. At least five survivors have declined to participate in the investigation after the denomination refused to waive attorney/client privilege or disclose its contract with the firm. 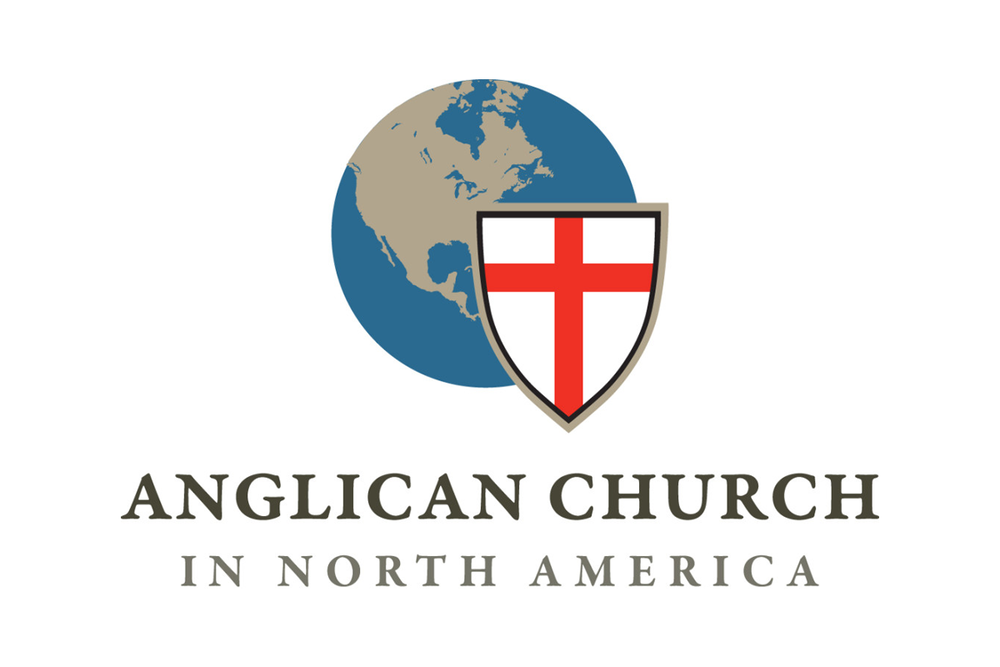 ACNAtoo responded to the BelieveUsToo statement in a statement of its own on Tuesday, saying “We believe you, #BelieveUsToo,” adding, “We’re grieved at the trauma you’ve experienced from Mark Rivera’s abuse and we are heartbroken by the ways you are still suffering.”

ACNAtoo went on to note that abuse survivors often disagree about what justice ought to look like. “One of our core principles is that we refuse to treat other survivors as adversaries, no matter what. When survivors publicly fight, abusers win,” the ACNAtoo statement said.

In an email to Religion News Service, Andrew Gross, spokesperson for ACNA, said ACNA was “thankful for the courage of the BelieveUsToo survivors who chose to go public last week and for all survivors who are working to build up the Body of Christ.”

The new group alleged that Rudenborg “abetted Mark Rivera in the abuse of a member of Church of the Resurrection” by allowing him to use her apartment for “sexual encounters” with one of the alleged victims who signed the BelieveUsToo statement and by affirming Rivera’s sexual relationship with the victim as “good and acceptable.” 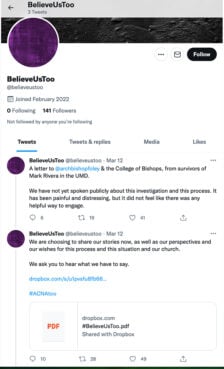 The letter charges that “Joanna is second only to Mark in the damage she has caused.”

The authors of the BelieveUsToo statement did not respond to repeated requests for comment.

Cherin Marie, the mother of another alleged victim of Rivera, said that Rudenborg has provided invaluable support for her and her family. In a response to BelieveUsToo she wrote, “The implication that (Joanna) is pursuing her own selfish agenda through her role as a survivor advocate is heartbreaking to my family.”

Rudenborg told RNS, “While I’m grieved about how my role is represented in the letter, I have owned the truth of my position as both victim and enabler to Mark’s community and to church leaders since I came forward about my own abuse, and to the public since last July 20 on Twitter.”

She added that she can’t defend her actions publicly “without disclosing identifying and highly personal information about a survivor whose abuse and story intersected with mine.”

In an email to RNS, ACNAtoo advocates said that many if not most abuse survivors would be excluded from advocacy if they were expected to behave perfectly “in the midst of trauma and coercive control.”

Abbi Nye, an ACNAtoo advocate and former member of the Upper Midwest Diocese, told RNS in an email that ACNAtoo does not receive survivor support funds but that a former team member did establish a GoFundMe on behalf of Rudenborg and Cherin Marie, who is known only by her first and middle names. Cherin has said she asked that all funds be directed to Rudenborg, who has received $3,376 in donations over the last eight months.

ACNAtoo advocates said Rudenborg would continue to work with the group, which they said has no single leader.

BelieveUsToo also expressed support for Ruch, who they claim has been falsely accused of covering up Rivera’s alleged abuse of a 9-year-old child, since both police and the Department of Children and Family Services were already notified of the abuse before Ruch learned of it. 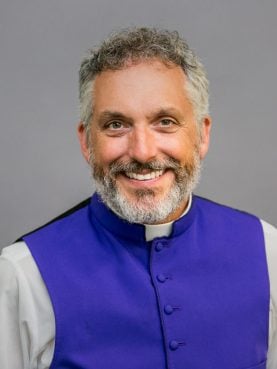 Cherin Marie, the child’s mother, told RNS she never suggested that Ruch failed as a mandated reporter. Rather, she claimed, Ruch didn’t inform members of his diocese of the allegations against Rivera for two years, didn’t provide a safe space for other survivors to come forward and didn’t hold other church leaders accountable for failing to report the abuse to authorities.

The BelieveUsToo statement went on to say that Rivera met his victims not through his ministry, first at Church of the Resurrection in Wheaton, Illinois, the diocesan headquarters, and later at Christ Our Light Anglican in Big Rock, Illinois, but at a “multiple-dwelling property” in Big Rock where Rivera and several of his victims lived.

In her own statement published in the ACNAtoo website, Cherin contested this characterization, which would take some blame off of Ruch. Cherin wrote that Rivera only became part of the community in Big Rock because of his leadership roles at Resurrection.

“My mother was the one who invited Mark and his family to move to Big Rock, to live on my childhood home property, after knowing and serving alongside him as a volunteer leader at the church for several years,” wrote Cherin. “My extended family members, who lent additional trust and credibility to Mark Rivera, met him through Church of the Resurrection.”

The authors of the statement wrote that ACNAtoo members and other ACNA “factions” “made an arbitrary connection between their doctrinal frustrations and Mark’s abuse” because they disagree with Ruch’s hard-line stance against same-sex marriage and women’s ordination.

The BelieveUsToo statement charged that some ACNA priests and other leaders “engaged in libel and preyed upon our pain in the service of furthering a political and doctrinal agenda.” BelieveUsToo asked that denominational leaders speak publicly in support of Ruch, reinstate him by Holy Week, end the investigation into ecclesial abuse and refrain from further negotiations with Rudenborg, who they said has wielded too much power in the investigation of Rivera and the church’s response.

“We believe that by attempting to appease ACNAtoo,” the statement said, “the Province is granting Joanna and ACNAtoo a position of authority that they should not have, and allowing untold delays in the timeframe for resolution.”

RELATED: ACNA moves forward with investigation amid concerns from survivors and advocates

ACNAtoo said its focus goes beyond Rivera because it’s important to examine the systems in which abuse takes place and because abuse doesn’t occur in a vacuum. “Abuse happens because abusers use culture, context, and relationships to normalize their behavior,” wrote Conor Hanson, an ACNAtoo advocate, in an email.

The three members of the church’s response team who resigned told RNS that the team often saw Rivera’s survivors as two groups: one “hostile to the ACNA” and one “supportive of Bp. Ruch” which was “described very positively,”

Autumn Hanna VandeHei, the Rev. Gina Roes and Christen Price, who resigned from the team in January over concerns that its process “never felt survivor-centered,” said separating survivors of the same perpetrator into groups can be re-traumatizing. “Every story and experience is real,” they said. “We believe and stand firmly with ALL survivors of Mark Rivera’s alleged horrific sexual abuse.”

News
Anglican Church of Canada leaders apologize to survivors, respond to ACCToo
Follow us on Facebook!
Submit your photos to RNS