(RNS) — Are nearly 40% of clergy really about to leave the ministry?

It’s a question that has come up regularly in conversations among sociologists of religion since The Barna Group, a research firm that focuses on religion, found last year that 2 in 5 Christian pastors had considered quitting full-time ministry in the past year.

As director of Hartford Institute for Religion Research, I am leading a massive, multi-year study of how churches have fared during the pandemic. Nearly every conversation I have gets around to just how exhausted clergy are and how many of their colleagues are thinking about quitting the ministry.

The theme of clergy burnout and the “Great Resignation” — the failure of thousands to return to work after the worst of the pandemic was over — are likewise echoed in innumerable newspaper and blog articles across the web.

But is it true?

The past two years have certainly been beyond trying. Religious leaders have not only had to learn new ways of doing their jobs — delivering their sermons virtually, conducting online committee meetings, and substituting texting, Facebook and Zoom for what used to be in-person, face-to-face encounters — they also had to decide, repeatedly, whether to encourage vaccinations, to close or reopen the church building, to enforce mask mandates and navigate issues of race and politics. It is exhausting just thinking about the trials most clergy have had to face since COVID-19 hit.

RELATED: How COVID-19 has made the lives of aspiring clergy more daunting

In the summer of 2021, we asked nearly 2,000 clergy if they considered the previous year the hardest year in their ministry experience. Two-thirds (67%) claimed to have thought this at least once or twice, and nearly a third (29%) had this thought fairly or very often.

A third of them actually had a year harder than 2020.

This same survey further documented that roughly 40% of congregations saw a rise in requests for food and monetary assistance, increased demands for psychological and spiritual counseling and a steep decline in volunteering by members. Plus 15% of them had to reduce staff hours or lay off personnel.

To top it all off, 75% reported some level of conflict arising from how they handled COVID-19 (though only a quarter called the conflict moderate or severe).

As a result, many of us who look at religious life in America wholeheartedly accept the “mass clergy exodus” storyline. But what does survey data actually show? 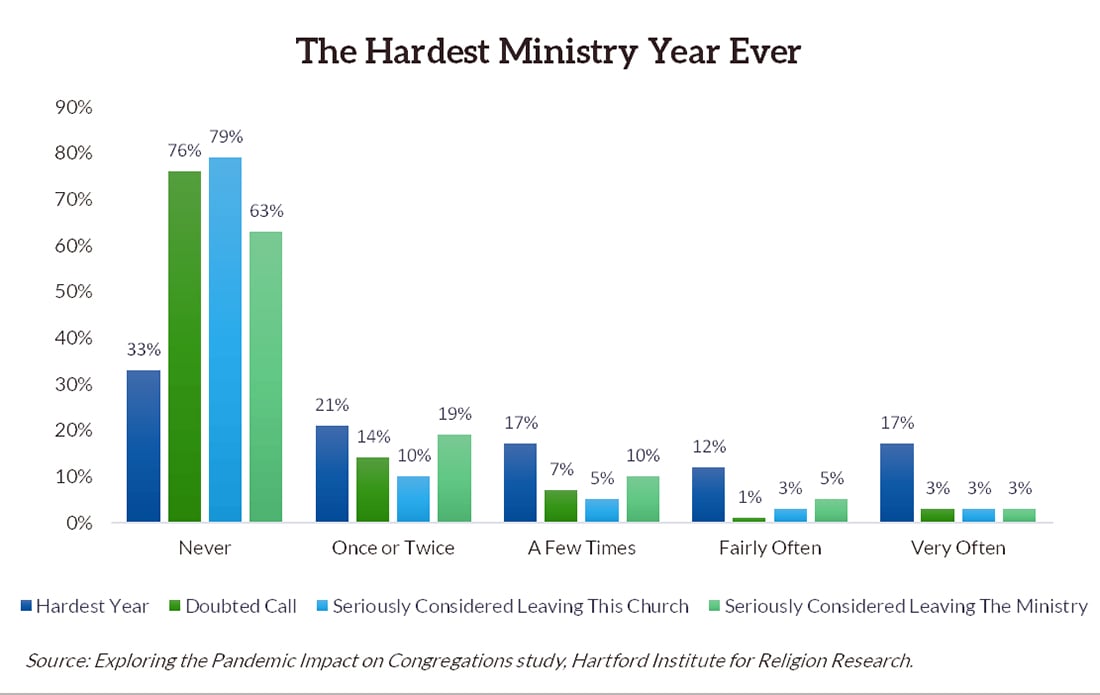 “The Hardest Ministry Year Ever” Graphic courtesy of HIRR

In our most recent survey, we asked clergy: “In the past year how often had you seriously considered leaving pastoral ministry?” A majority — 63% — responded “never,” which meant, however, that 37% of pastors had this thought cross their minds. This result parallels Barna’s finding.

But thinking something in the middle of a trying year of ministry does not automatically equate to actually leaving the profession. When you look more deeply at our data on how often pastors had this thought, only 5% did so fairly often and just 3% said very often.

Overall, our data just doesn’t provide much evidence of a pending mass exodus of clergy. It does show that a small percentage of religious leaders are rethinking their choice of vocation.

Scott McConnell of Lifeway Research, the survey arm of the Southern Baptist Convention, has suggested that in their pre-pandemic data, slightly more than 1% of clergy annually leave the ministry. If we assume that the 3% of clergy who thought very often about leaving all might actually leave, that would show a slightly increased rate of exodus, but certainly not the predicted mass exodus.

The real question may be, who are these 3% of clergy who often ponder resignation, and, more importantly, why are they considering leaving? 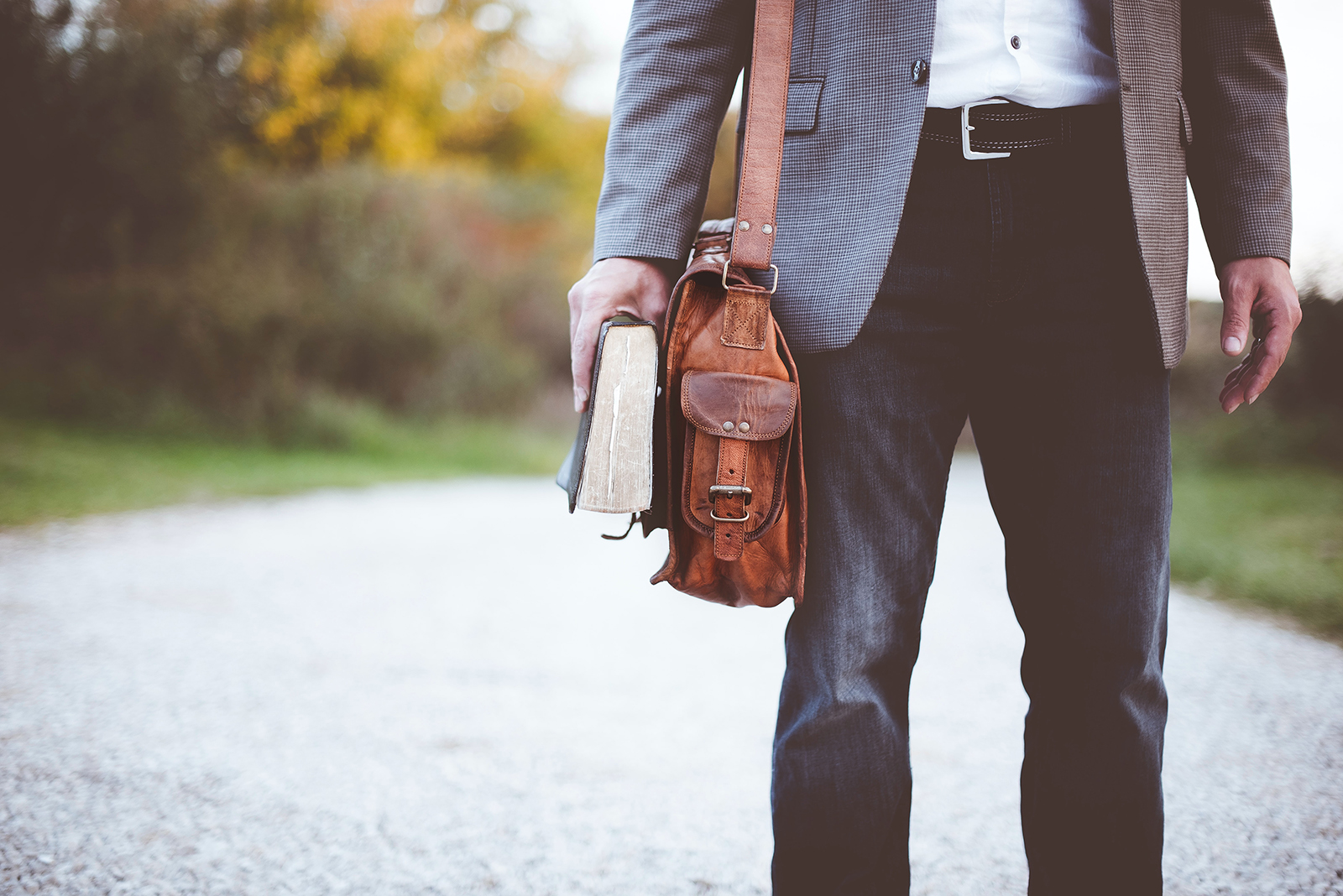 Barna’s data suggests they are more likely to be mainline, female, younger and in poorer physical and mental health, which our data affirms.

But further analysis suggests other dynamics at work. Those pastors who thought most about leaving the ministry led declining churches of 100-250 Sunday attendees even before the pandemic. They tend to have little staff support while facing significant conflict over the pandemic. They were struggling financially and, by several of our measures, were less vital.

It’s interesting that, according to Pew Research, most secular job resignations in COVID-19’s aftermath stemmed from a poor working environment. Likewise, disaffected clergy were likely contemplating an exodus from the ministry because they faced difficult congregational situations before the pandemic.

It is impossible to tell if lack of education, experience or skill created poor working conditions these pastors were enduring. But it is certain that a strong desire to leave the ministry was in part shaped by a challenging contextual situation, not any deficiency in any individual pastor’s theology, gender, age, or physical and mental situation, as is often assumed. (We should note, too, that women, younger pastors, and those in the mainline are more likely to be assigned to struggling churches and therefore suffer mental or physical disease.)

The good news is that certain aspects of our survey showed that clergy are in fact highly resilient. We used several of the questions from the Harvard Flourishing Measure, an indicator of life satisfaction, to ask clergy about their well-being. In every case, the clergy in our research scored significantly higher than national averages of random respondents in pre-pandemic (January 2020) and mid-pandemic (June 2020) flourishing surveys.

RELATED: Houses of worship grapple with the future of their online services

Likewise, 52% of pastors agreed that their congregation’s ministries continued through the heart of the pandemic without significant disruption. More than half added new social outreach efforts or augmented what they were already doing, and more than two-thirds (69%) embraced new opportunities for ministry as a result of the pandemic. Through the significant challenges the pandemic wrought, a majority never thought once about leaving their church or doubted their calling.

Clergy continue to express to us their exhaustion and uncertainty about the directions forward as the pandemic wanes. Time will tell the full implications of these pastoral struggles. But it’s a good bet that the hardest ministry year ever won’t turn into the greatest resignation.

(Scott Thumma is professor of sociology of religion and director of the Hartford Institute for Religion Research at Hartford International University. He is the principal investigator for a five-year Lilly Endowment grant to study the impact of the pandemic on churches. The views expressed in this commentary do not necessarily reflect those of Religion News Service.)