(The Conversation) — Since Russia’s invasion of Ukraine, the leader of the Russian Orthodox Church has defended Russia’s actions and blamed the conflict on the West.

Patriarch Kirill’s support for the invasion of a country where millions of people belong to his own church has led critics to conclude that Orthodox leadership has become little more than an arm of the state – and that this is the role it usually plays.

The reality is much more complicated. The relationship between Russian church and state has undergone profound historical transformations, not least in the past century – a focus of my work as a scholar of Eastern Orthodoxy. The church’s current support for the Kremlin is not inevitable or predestined, but a deliberate decision that needs to be understood.

For centuries, leaders in Byzantium and Russia prized the idea of church and state working harmoniously together in “symphony” – unlike their more competitive relationships in some Western countries.

In the early 1700s, however, Czar Peter the Great instituted reforms for greater control of the church – part of his attempts to make Russia more like Protestant Europe.

Churchmen grew to resent the state’s interference. They did not defend the monarchy in its final hour during the February Revolution of 1917, hoping it would lead to a “free church in a free state.”

The Bolsheviks who seized power, however, embraced a militant atheism that sought to secularize society completely. They regarded the church as a threat because of its ties to the old regime. Attacks on the church proceeded from legal measures like confiscating property to executing clergy suspected of supporting the counterrevolution.

Patriarch Tikhon, head of the Church during the Revolution, criticized Bolshevik assaults on the Church, but his successor, Metropolitan Bishop Sergy, made a declaration of loyalty to the Soviet Union in 1927. Persecution of religion only intensified, however, with repression reaching a peak during the Great Terror of 1937-1938, when tens of thousands of clergy and ordinary believers were simply executed or sent to the Gulag. By the end of the 1930s, the Russian Orthodox Church had nearly been destroyed.

The Nazi invasion brought a dramatic reversal. Josef Stalin needed popular support to defeat Germany and allowed churches to reopen. But his successor, Nikita Khrushchev, reinvigorated the anti-religious campaign at the end of the 1950s, and for the rest of the Soviet period, the church was tightly controlled and marginalized.

The dissolution of the Soviet Union brought yet another complete reversal. The church was suddenly free, yet facing enormous challenges after decades of suppression. With the collapse of Soviet ideology, Russian society seemed set adrift. Church leaders sought to reclaim it, but faced stiff competition from new forces, especially Western consumer culture and American evangelical missionaries. 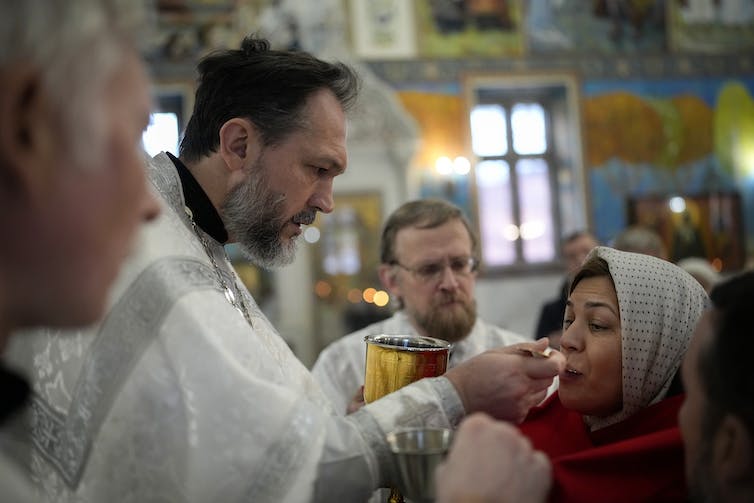 A Russian Orthodox Church priest leads a service at the Church of the Annunciation of the Blessed Virgin in Sokolniki in Moscow on Feb. 15, 2022.
AP Photo/Alexander Zemlianichenko

The first post-Soviet head of the church, Patriarch Aleksy II, maintained his distance from politicians. Initially, they were not very responsive to the church’s goals – including Vladimir Putin in his first two terms between 2000 and 2008. Yet in more recent years, the president has embraced Russian Orthodoxy as a cornerstone of post-Soviet identity, and relations between church and state leadership have changed significantly since Kirill became patriarch in 2009. He quickly succeeded in securing the return of church property from the state, religious instruction in public schools and military chaplains in the armed forces.

Kirill has also promoted an influential critique of Western liberalism, consumerism and individualism, contrasted with Russian “traditional values.” This idea argues that human rights are not universal, but a product of Western culture, especially when extended to LGBTQ people. The patriarch also helped develop the idea of the “Russian world”: a soft power ideology that promotes Russian civilization, ties to Russian-speakers around the world, and greater Russian influence on Ukraine and Belarus.

Although 70%-75% of Russians consider themselves Orthodox, only a small percentage are active in church life. Kirill has sought to “re-church” society by asserting that Russian Orthodoxy is central to Russian identity, patriotism and cohesion – and a strong Russian state. He has also created a highly centralized church bureaucracy that mirrors Putin’s and stifles dissenting voices.

A key turning point came in 2011-2012, starting with massive protests against electoral fraud and Putin’s decision to run for a third term.

Kirill initially called for the government to dialogue with protesters, but later offered unqualified support for Putin and referred to stability and prosperity during his first two terms as a “miracle of God,” in contrast to the tumultuous 1990s.

In 2012, Pussy Riot, a feminist punk group, staged a protest in a Moscow cathedral to criticize Kirill’s support for Putin – yet the episode actually pushed church and state closer together. Putin portrayed Pussy Riot and the opposition as aligned with decadent Western values, and himself as the defender of Russian morality, including Orthodoxy. A 2013 law banning dissemination of gay “propaganda” to minors, which was supported by the church, was part of this campaign to marginalize dissent.

Putin successfully won reelection, and Kirill’s ideology has been linked to Putin’s ever since. 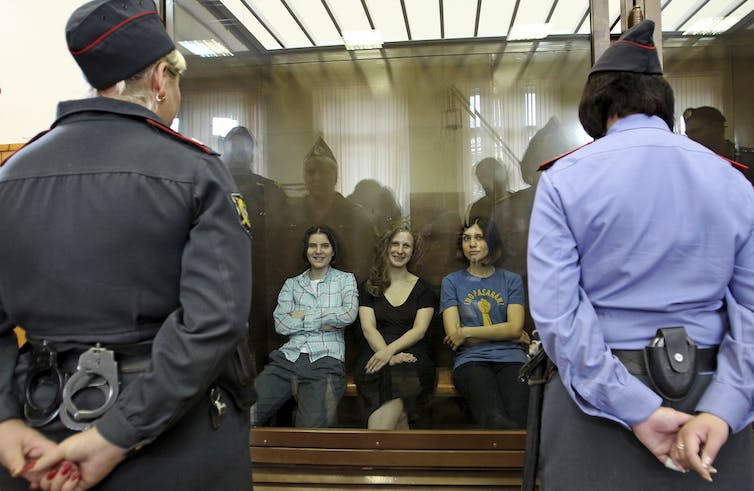 Members of the feminist punk group Pussy Riot sit in a glass cage at a courtroom in Moscow in 2012. The women were charged with hooliganism connected to religious hatred.
AP Photo/Mikhail Metzel

Russia’s annexation of Crimea and the eruption of conflict in the Donbas in 2014 also had an enormous impact on the Russian Orthodox Church.

Ukraine’s Orthodox churches remained under the Moscow Patriarchate’s authority after the collapse of the Soviet Union. Indeed, about 30% of the Russian Orthodox Church’s parishes were actually in Ukraine.

The conflict in Crimea and eastern Ukraine, however, intensified Ukrainians’ calls for an independent Orthodox church. Patriarch Bartholomew, the spiritual head of Orthodox Christianity, granted that independence in 2019. Moscow not only refused to recognize the new church, but also severed relations with Constantinople, threatening a broader schism.

Orthodox Christians in Ukraine were divided over which church to follow, deepening Russia’s cultural anxieties about “losing” Ukraine to the West.

Kirill’s close alliance with the Putin regime has had some clear payoffs. Orthodoxy has become one of the central pillars of Putin’s image of national identity. Moreover, the “culture wars” discourse of “traditional values” has attracted international supporters, including conservative evangelicals in the United States.

But Kirill does not represent the entirety of the Russian Orthodox Church any more than Putin represents the entirety of Russia. The patriarch’s positions have alienated some of his own flock, and his support for the invasion of Ukraine will likely split some of his support abroad. Christian leaders around the world are calling upon Kirill to pressure the government to stop the war.

The patriarch has alienated the Ukrainian flock that remained loyal to the Moscow Patriarchate. Leaders of that church have condemned Russia’s attack and appealed to Kirill to intervene with Putin.

A broader rift is clearly brewing: A number of Ukrainian Orthodox bishops have already stopped commemorating Kirill during their services. If Kirill supported Russia’s actions as a way to preserve the unity of the church, the opposite outcome seems likely.

(Scott Kenworthy, Professor of Comparative Religion, Miami University. The views expressed in this commentary do not necessarily reflect those of Religion News Service.)