(RNS) — What if you could combat white supremacy and the soul-crushing attributes of capitalism while taking a restorative nap?

According to Tricia Hersey, who calls herself the “Nap Bishop,” rest is a spiritual force that allows participants to honor their inherent divinity, abandoning a mindset that values productivity over self-worth.

Since 2016, Hersey, 47, has been leading retreats, curating performance art and crafting workshops to promote rest as a tool of resistance against what she calls “grind culture,” which teaches that endless hustle leads to fulfillment.

“This work is for all those weary and exhausted by grind culture, and I believe that’s the entire globe,” Hersey told Religion News Service. “We can’t imagine this new world we want to see, full of justice and liberation and freedom for all people, from an exhausted space.”

Hersey’s message is gaining traction. An impressive 460,000 followers also track The Nap Ministry’s Instagram account, which posts memes and screenshots with messages like: “You don’t have to earn rest” and “A Black Woman in a rested state is a radical act.” 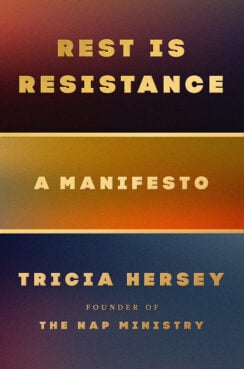 “Rest Is Resistance: A Manifesto” by Tricia Hersey. Courtesy image

In the fall, Hersey plans to open a “Rest Temple” in a former Atlanta Presbyterian church as the ministry’s new headquarters and publish her first book, “Rest is Resistance: A Manifesto.”

While many of Hersey’s events do, in fact, involve napping — and feature blankets, pillows and a sleep-friendly soundtrack to boot — The Nap Ministry is about more than catching zzz’s.

“Rest is anything that slows you down enough to connect with body and mind,” she said. “It’s an expansive, experimental portal.”

Raised in a Church of God in Christ church just outside Chicago’s South Side, Hersey said growing up in a Black Pentecostal church taught her the value of Black autonomy, nurtured her gift of public speaking and imbued her with an embodied spirituality.

In 2013, after years working in theater and community organizing, Hersey found herself — to her surprise, she said — enrolled in a master of divinity program at the Candler School of Theology at Emory University in Atlanta, hoping to study creativity and spirituality.

“I was working two jobs, had an internship, and was going to school full time. I would get to campus sometimes at six in the morning and wouldn’t get home sometimes until midnight,” Hersey said. “I had a 6-year-old son at the time. I was literally at a moment of exhaustion mentally and physically and so I just begin resting and taking naps all over campus.” 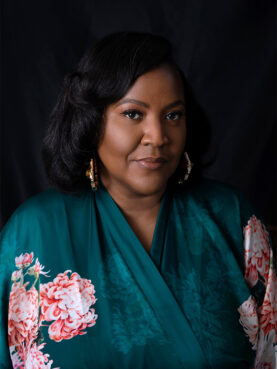 Hersey began napping in the library, chapel and in any available corner of campus. At the same time, she was taking classes on Black Liberation and womanist theology and began digging through Emory’s African American history archives. It wasn’t long before Hersey was connecting the dots between the exploitation of enslaved Africans and her own sleep deprivation.

“You have to understand the history of where capitalism comes from. It comes from the plantations. It comes from slavery. And so that same engine is a part of our system now,” Hersey said.

Hersey concluded her degree with a performance art piece in which she lay on a bed, read archived material about plantation labor and invited participants to nap. Her ideas eventually evolved into The Nap Ministry.

“I really was not trying to have this new global movement on rest. … this was not in any way deliberate,” Hersey said. “It was really just me trying to save my own life. I was really killing myself with the pace that I was going.”

The Rev. Dionne P. Boissière, chaplain of the ecumenical Church Center for the United Nations in New York, said that Hersey’s cause has inspired her to teach the importance of rest in her own ministry. She offers a “Selah Space” that invites participants to sit in silence, listen to music, meditate or practice yoga.

“It was not until I got sick myself that I really started to seriously take into consideration Tricia’s message and try to rethink what it meant to engage in rest as a tool of resistance,” said Boissière, who told Religion News Service she was hospitalized due to factors related to stress and overworking. Faced with her own limitations, Boissière said she began to unlearn self-sabotaging habits that prioritized productivity. She began practicing meditation and napping.

“The work of The Nap Ministry is revolutionary,” said Boissière. “We are dying because we are doing somebody else’s work. The divine directive is that we are to come to Jesus now, take Jesus’ yoke upon us. We don’t have to always be working.” People participate in a Resurrect Rest School put on by The Nap Ministry in Atlanta. Photo courtesy of Wild Talk Stories & Strategies

Hersey’s message has struck home, particularly at a time when productivity has been stifled by a pandemic and distressing events. Melva Sampson, a minister and an assistant professor at Wake Forest University School of Divinity in Winston-Salem, North Carolina, began a yearlong sabbatical in 2020, supposedly dedicated to writing. But with the instability and devastation of the pandemic as well as the deaths of Ahmaud Arbery, George Floyd and Breonna Taylor, Sampson soon found herself having to answer for how little she had produced.

“I didn’t have the language to say I had made a choice to take care of me and my family the best I could,” Sampson said. “It was really The Nap Ministry that helped me alleviate any guilt I may have felt because I wasn’t producing.”

Today, Sampson integrates tenets of The Nap Ministry into the Pink Robe Chronicles, a virtual community she leads that meets weekly to share reflections grounded in womanist teachings. “The Nap Ministry says rest is not a privilege, it’s a right,” Sampson said. “It’s not just for people who work certain jobs. Those of us who do have the time to rest have a collective responsibility to create spaces for rest.”

RELATED: In ‘This Here Flesh,’ Cole Arthur Riley finds the sacred in humanity

Hersey said that some have diluted her work by twisting it into a simplistic self-care narrative.

“That’s one thing I dislike about our work blowing up on social media,” said Hersey. “It doesn’t allow for people to go deep into what’s really holding this work together. They think it’s just some cute wellness thing. And it really is held together by deeply liberating ideas and theories that come out of Black thought and scholarship.” 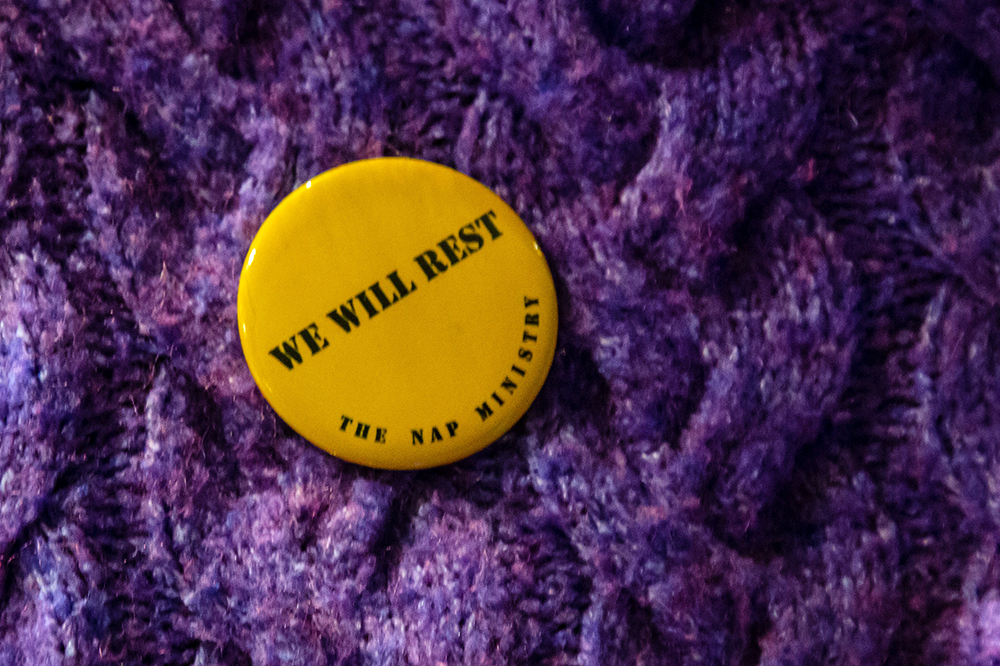 An individual wears a “We Will Rest” pin from The Nap Ministry. Photo by Stanchez Kenyata

Hersey plans to set the record straight in her forthcoming book, highlighting the ways her work is rooted in the writings of theologian James Cone and writers Audre Lorde and Toni Morrison and others. It will also, she hopes, serve as a guidebook for the future of the movement for rest, which Hersey says is just getting started.

For folks like Boissière, The Nap Ministry’s disruptive anti-capitalist message has already taken hold. “My denomination does not have an ecclesiastical order, so we don’t have bishops,” said Boissière. “I’ve said it before, and I’ll say it forever: We may not have that, but Tricia Hersey is my bishop.”

FROM THE ARCHIVES: The science of Sabbath: How people are rediscovering rest—and claiming its benefits