(RNS) — Two decades ago, Vance Pitman and a pair of friends from the Bible Belt went out west to start a church in Sin City.

They launched a Las Vegas congregation, known as Hope Church, two weeks after the Sept. 11 attacks and it grew beyond their wildest dreams, becoming a multicultural megachurch with congregation members who speak more than 50 languages.

During the summer of 2021, Pitman and his wife began to think about the future. Rather than focusing on building up Hope Church and Pitman’s platform there, they wanted to spend more time with their grandkids and on helping other churches get off the ground.

In December, Pitman resigned as senior pastor of Hope Church — a rare move for megachurch pastors in their prime — to take a new role as president of the Send Network, the church-planting arm of the Southern Baptist Convention’s North American Mission Board.

Pitman spoke to Religion News Service in March, not long after starting his new role. The interview has been edited for length and clarity.

Why step down as senior pastor at your church to take this new job?

About 40% of the unchurched population in America lives in the Mountain and Pacific time zones, which is about 75 million people. We had a dream to start 300 new churches, and currently, we’re about 80 churches into that process. Last summer, my wife and I just spent some time before the Lord and we began to ask,”Lord, what have you made us to do?”

There was a shift taking place in my heart that for the next season of ministry, rather than be focused on Hope Church, it was going to be focused on the “big C” church and the kingdom. Also, I get about five calls a year from senior pastors across the country who are retiring or getting ready to finish their ministry and looking for their successor and asking if I’d be interested in taking over. I got burdened that we don’t do a good job of developing the next generation of pastors and church planters in North America. I felt like this was the right time for us to make this step.

Will you still be a member of Hope Church?

For now, I’m going to live here and be a member of the church here. My family will still serve here and I’ll preach occasionally — four or five times a year — but we are sent out full time. We raised up a team from within that’s already taken the mantle of leadership, we passed the baton and so the church is doing great.

What have you learned in Vegas as a church planter that you think might be useful in this new role? 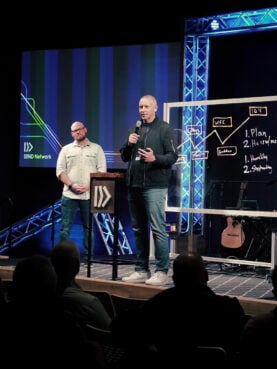 Vance Pitman speaks for the first time in his capacity as Send Network’s new president at an orientation for 165 of the organization’s newest church planting missionaries March 7, 2022. Photo courtesy of Send Network/Kent Mallett

You can do that strategy in Memphis or Nashville or Atlanta or Birmingham, where you have Christians waking up looking to go to church on Sunday. In Las Vegas, when I moved here, 95% of our city was non-Christian and 60% was nonreligious. You can send out mailers all day long but nobody’s looking to go to church.

Too many church planters show up in cities thinking like pastors of churches rather than as missionaries, thinking about how to engage a city with the gospel. How do you begin to build relational bridges? How do you build opportunities to serve the city and build those relationships that allow for cultivating gospel impact in a city?

When you say engage the city with the gospel, what does that look like?

It can be as simple as what some would call servant evangelism, where you look for needs in a community that you can meet and you begin to meet those tangible needs, not with an ulterior motive of sharing Christ but with an ultimate motive of sharing Christ. I’m not meeting that need so I can share the gospel with you — I’m meeting that need because God desires that need in our community to be met. But as I meet that need, I look for opportunities to let you know who Jesus is in my life.

Two related questions: You were sent out from the Bible Belt and Georgia to Las Vegas. Would you do that over again — would you parachute in again? And is it important for new churches to have a connection with other churches that send them out?

And yes, I would do it again because it’s what God called me to do. I do believe it’s a both-and. There are places we need to parachute people in. That’s what missionaries do. They go where the gospel is not. They go where the church is not and they take the gospel to new areas. When the missionary comes in and begins to raise up indigenous leaders and planters in the local context — that’s when you can begin to see real gospel movement.

You are starting this new role at a time when there is a lot of conflict in the SBC and a loss of interest in denominations and larger institutions. Does taking this new role reflect your belief in cooperation among churches, which you referred to as a focus on the kingdom” or “big C” church?

I believe we’re better together — that one church cannot accomplish the Great Commission by itself. And so, for us to really be about accomplishing the Great Commission, we must work together. And when I say that, I don’t even just simply mean with the Southern Baptist Convention. I believe that we as kingdom believers from multiple tribes must work together. The kingdom of God is much bigger than the Southern Baptist Convention. We’re just a small piece of a really big pie of what God’s doing all over the world.

I do think you have to be careful when you assume things about the SBC because of what you see or hear on Twitter or social media. We just had 165 new planters in orientation last week and it was an incredibly diverse gathering where there was life, there was energy that was passionate about the gospel, about the nations being reached. When you get on social media and listen to the buzz on there, you can begin to think one thing. But if you begin to get out in the cities and you talk to the churches you see something else.