(RNS) — The way Florida Southern Baptist pastor Tom Ascol sees it, there is little difference between a woman who chooses to end her pregnancy and a hit man.

Both pay someone to end a human life, his argument goes, and so both should face criminal charges. “It’s like saying if I don’t murder someone, but I just contracted a murderer to murder someone I’m not culpable,” he told Christian radio host Jeff Schreve on Tuesday (May 17).

The analogy is not uncommon — Pope Francis has made similar “hit man” comments — Ascol also believes that women who have abortions should be charged with homicide and face potential jail time. And Ascol criticizes “pro-life industry elites,” who, he says, get in the way of ending abortion in America.

Ascol, a leading candidate for president of the Southern Baptist Convention, is part of a small but growing movement of abortion abolitionists who reject the idea that abortion should be allowed if a mother’s life is endangered or in cases of rape or incest.

The movement prompted a bill, now pulled by lawmakers in Louisiana, that would have treated abortion as a homicide. Abolitionists recently accused the National Right to Life Committee, Americans United for Life, the U.S. Conference of Catholic Bishops and the SBC’s Ethics and Religious Liberty Commission of betraying the anti-abortion cause after the groups drafted an open letter opposing criminal penalties for women who have the procedure.

“We state unequivocally that we do not support any measure seeking to criminalize or punish women and we stand firmly opposed to including such penalties in legislation,” the letter read.

Ascol, who declined a request for an interview, called for Brent Leatherwood, acting ERLC president, to be fired for signing the letter. In an article for Founders Ministries, a conservative organization headed by Ascol, the pastor laid out his conviction that abortion should be treated as a homicide, and this week he repeated his points on Twitter.

To back his claim, Ascol pointed to a resolution passed at the SBC’s 2021 annual meeting calling for abortion to be abolished and for it to be treated as murder.

"Criminalization of mothers" is newspeak. Don't be misled. Only actions can be crimes, not people. And the act of murder is a crime regardless of how old the murdered is or how sympathetic the murderer is. https://t.co/E1Re0B4DSU

The dispute between abortion foes who see themselves as abolitionists and those who call themselves “pro-life” will likely heat up if, as expected, the Supreme Court overturns Roe v. Wade in June, as rival anti-abortion groups compete over who will determine the shape of abortion limits in red states. Carol Tobias, president of the National Right to Life Committee, who signed the letter to state legislators, said she and leaders of other groups are focused on saving babies, not putting women in jail. She worries that politicians and groups that favor abortion rights will use bills like the one in Louisiana to drum up support for their side.

The letter had already been in the works before the Louisiana bill made national headlines, said Tobias, but she believes such proposals take the focus off the goal of preventing abortions.

“The focus will be on what kinds of penalties will be assessed, rather than talking about a baby with fingers and toes and a heartbeat,” said Tobias. “The primary reason we are doing this is to save those babies.”

Tobias adds that there’s little public support for criminal penalties for women who have abortions. A recent Pew Research survey found that 14% of Catholics and 18% percent of Protestants — including a quarter of evangelicals (24%) — say a woman who has an illegal abortion should face jail time. Overall, 14% of Americans would support jail time, while 16% would support fines or community service as a penalty. According to data from the Centers for Disease Control and Prevention, there are about 25 times as many abortions in the United States each year as homicides, meaning that charging women who have abortions with homicide could require a massive expansion of criminal investigations and prosecutions.

Richard Land, former president of the ERLC and a longtime abortion foe, opposed the SBC’s abolitionist resolution. He defended the so-called incremental approach, saying it has reduced the number of abortions. That approach, he wrote in a recent essay, is far better than doing nothing while demanding a total ban.

“What if I came upon a wrecked school bus that had plunged into a river with 60 children onboard? Since I can’t save all of them, should I then do nothing?” he wrote. “I think not.”

The ERLC’s Leatherwood told Religion News Service in a statement that Southern Baptists seek “an end of the abortion regime in America,” while showing compassion­, which is in line with last year’s resolution and other previous SBC resolutions.

“So, because this is the clear will of our churches, this will be the direction we continue working in as we seek to end abortion, save lives, serve mothers and support families,” the statement said.

James Silberman, director of communications for Free the States Action Fund, an abortion abolitionist group, said the failure of the incremental approach to restricting abortion led to the rise of abolitionist groups, who were inspired by anti-slavery groups of the 1800s. 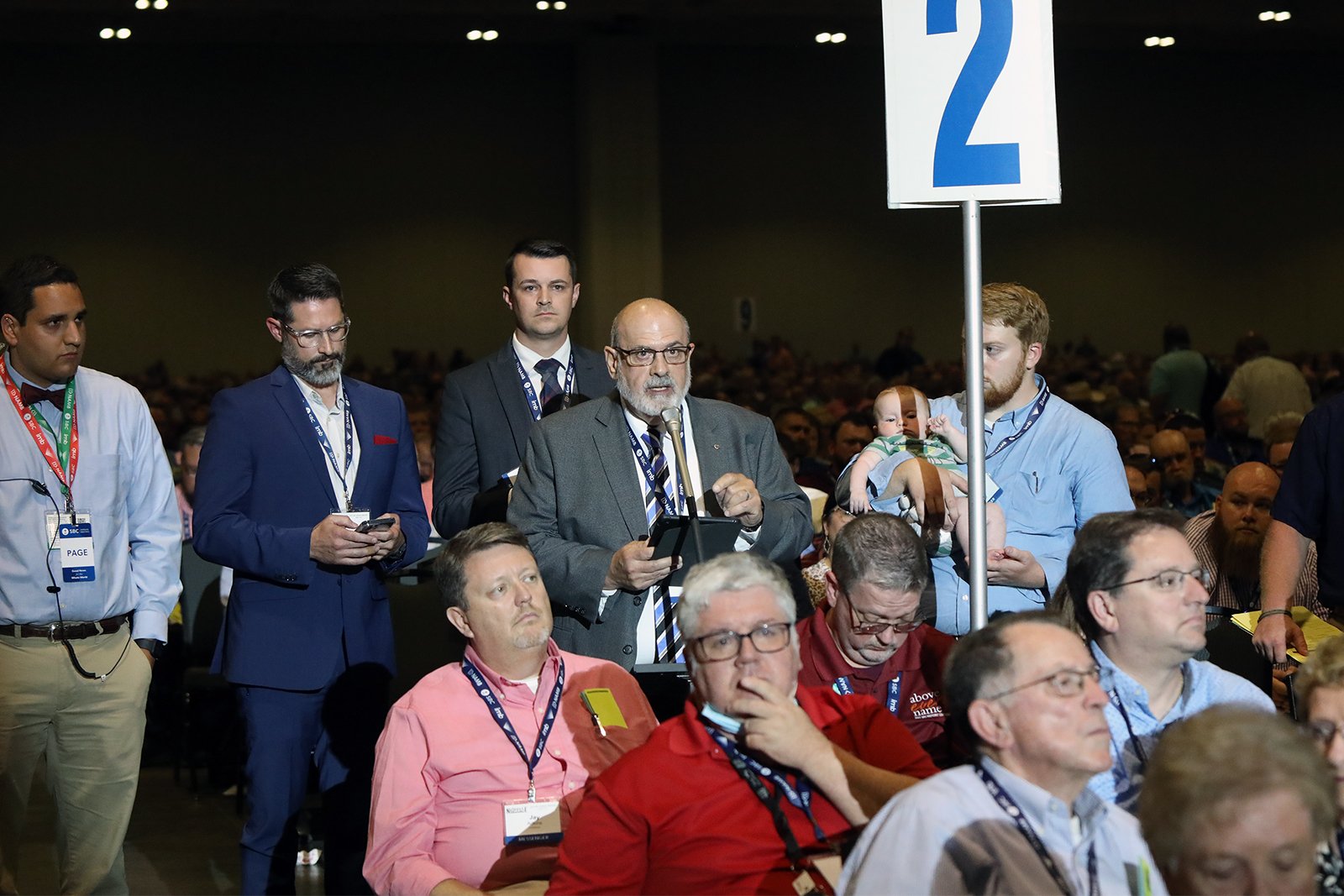 Baptists in Oklahoma, including Bill Ascol, brother of Tom Ascol, played a key role in the movement’s growth. Silberman said that the abolitionist movement got a shot in the arm after the state Baptist Convention opposed legislation in 2019 that would have abolished all forms of abortion.

That fueled a backlash, said Silberman.

Silberman said he was glad to see this month’s letter from national groups opposing penalties for women who have abortions. “The abolition movement grows when the pro-life movement and pro-life leaders oppose abolition bills,” he said.

The American Life League, a Catholic group founded in 1979, has long called for the abolition of abortion, focusing on training activists to oppose new Planned Parenthood clinics and publishing materials about church teaching about the sacredness of human life. Dwain Currier, the organization’s director of public policy, said that many people who oppose abortion are willing to compromise — something his group wants to change. “We need to start training people that evil is always evil,” Currier said.

But the group has largely stayed out of politics, Currier said, because almost all legislation about abortion includes some kinds of exceptions. 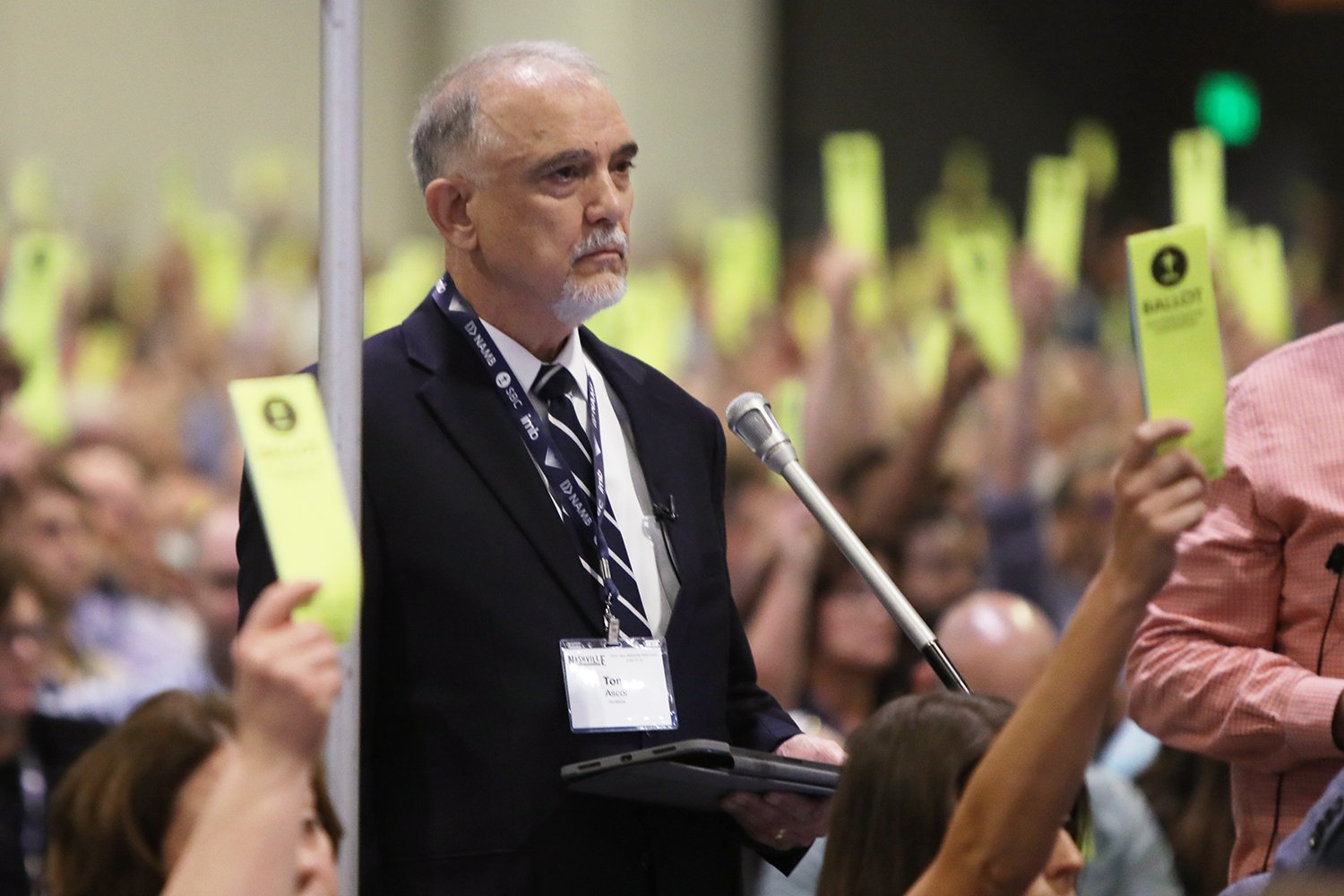 Tom Ascoll waits near a mic during the SBC annual meeting at the Music City Center in Nashville, Tuesday, June 15, 2021. RNS Photo by Kit Doyle

In his radio interview, Tom Ascol also cited politics as a problem. Pro-life elites oppose abolition, he said, because it would hurt their fundraising.

“I have to tell you, at least with some of these organizations, I’m becoming fully convinced that’s precisely what’s going on,” he said.

Tobias said she has heard such criticism in the past from groups that support abortion rights. She said the conflict between abolitionists and groups like National Right to Life is counterproductive.

“I want us focused on winning elections to save babies,” she said.