(RNS) — Salt Lake City isn’t necessarily the first place I think of when I imagine the full flourishing of LGBTQ people. But it’s certainly home to one of the proudest Pride celebrations I’ve ever seen.

Last weekend I had the privilege of walking around the festival with a dear friend. We didn’t see all of it; there was no way to in just one afternoon. According to public relations manager Kevin Randall, it was the largest Pride gathering in the city’s history, with around 70,000 attendees and 300 vendors, booths and exhibits. The parade route doubled in size — partly because of the social distancing that’s wise in the age of COVID-19, and also to accommodate the growing crowds.

Last June, students at church-owned Brigham Young University and allies held an unofficial Pride march that was not sponsored by the school or by The Church of Jesus Christ of Latter-day Saints. More than a thousand people showed up. I’ve heard that a similar gathering is planned for this month, though when I did a Google search I didn’t come up with a date or a link for it.

I wonder if that omission is deliberate. In some parts of Mormon country, publicizing a date for Pride risks inviting protesters and a whole lot of hatred. That’s been true since the early days of Pride gatherings in Utah. According to an exhibit on Pride that’s currently running at the Salt Lake City Public Library, in 1991, self-identified white supremacists shouted insults at LGBTQ celebrants while waving a Nazi flag and carrying a sign that read “Thank God for AIDS.”

And then there have been conflicts over many years with The Church of Jesus Christ of Latter-day Saints, whose policies have shifted over the last several decades. Greg Prince’s 2018 book “Gay Rights and the Mormon Church,” which is definitely worth a read, delves into the details of these changes. 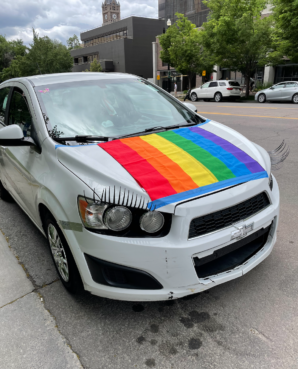 In a nutshell, in the 1970s the church preached that homosexuality was a terrible sin, excommunicated members for being gay, encouraged electric shock therapy at BYU and told gay men that if they’d just get married in the temple to a righteous woman, they’d be cured.

Today, being gay is not enough to warrant excommunication; it’s homosexual behavior that is punished. The church has not repeated its disastrous 2008 mobilization for California’s Proposition 8 — disastrous because it won the battle to pass the measure limiting marriage to heterosexuals but decisively lost the subsequent PR war — but it still teaches that marriage between people of the same sex is a sin.

In 2015 it issued a policy that such marriages should automatically trigger a disciplinary hearing, resulting in probable excommunication. In 2019 that policy was reversed, at least on paper, though I continue to hear stories about church members being excommunicated for same-sex marriage.

(I should note that the word “excommunication” has been replaced in the recent Handbook by “church membership withdrawal.” It’s a fascinating change, because the new language makes a person’s membership status sound almost voluntary, as if the church is a fitness center you’re taking a break from for a few months, even while the church’s theology teaches that such membership “withdrawal” has eternal consequences such as the loss of temple sealings.)

For church members who are gay, queer, trans, bisexual or otherwise sexually nonconforming, the moving target that is the organization’s stance toward LGBTQ people can be maddening. The church accompanies nearly every policy change with assertions that the changes come direct from God’s mouth to the prophet’s ear.

Often, these changes are incremental steps in the right direction, as I’ve said. But they sometimes come too late to save the lives and families of the people who were crushed by the earlier iterations that had been previously touted as God’s will.

That was the case for George Deussen, whom I met this past weekend at Pride. His youngest son came out as gay at 13, and although his family was supportive he was sometimes filled with self-loathing because of the homophobic messages he got at church. “If God’s people hate me, then God must hate me,” he would say.

“His only connection was that this was the one true church, and these must be God’s people,” said Deussen. So if they were telling him he was defective, then he must be defective.

The November 2015 anti-LGBTQ policy was “the real explosion” for his son, who took his own life the following June. George Deussen and Alyson Paul, right, founders of Peculiar, at the Utah Pride Festival with friend Jana Spangler, June 5, 2022. Spangler is wearing a “Families Are Forever” T-shirt that references both a common LDS theme and the LGBTQ rainbow. RNS photo by Jana Riess

“That was (when) the ceiling broke open and the floor broke out,” Deussen told me. In his grief, he had a deep spiritual experience about a week after his son’s death in which he received a vision of sorts. “I was looking down this tunnel, and I saw thousands of gay people looking back at me and asking me for help,” he said.

He determined to do something about it. With his wife, Alyson Paul, he started the organization Peculiar, which aims to build bridges between the LGBTQ community and religion, including the LDS church.

He remains a member of the church but said it has given “no support” to what Peculiar tries to do, which is to change hearts by telling the personal stories of LGBTQ people. In particular, the organization wants to educate and empower the families of queer youth in how to love these kids.

Deussen said the two great commandments Jesus gave — to love God and love one another — are both about the same thing. “He wants our love above all things. And if there’s anything that you do that separates anybody, you need to change it.”

For me this weekend at Pride, being around people like Deussen was healing. They’re trying to make things better for LGBTQ people in Utah (and everywhere), and in this effort they were joined by many other organizations and people. At the Mormons Building Bridges booth, for example, Tiffany Nutter and her two young daughters were giving free hugs to anyone who needed one.

I don’t know what prompted them to give up a precious summer weekend afternoon to dispense hugs to strangers, but it was a beautiful thing.

Mormonism and LGBT rights: Some progress, even more questions