(The Conversation) — The Indian government finds itself in a diplomatic crisis following offensive remarks by the ruling Bharatiya Janata Party (BJP) spokesperson, Nupur Sharma, on national television about the Prophet Muhammad and his wife, Aisha. The BJP has suspended Sharma from the position, but that has not been enough to quell the crisis. Over a dozen Muslim countries, including Pakistan, Iran and Saudi Arabia, have condemned the Indian government and asked for a public apology.

This is just another incident of hate speech against Muslims, which has been rising in India since the Prime Minister Narendra Modi-led BJP government came to power in 2014. The government has been criticized for several lynchings of Muslims by Hindu mobs with police indifference and judicial apathy over the past years. In 2019, the BJP passed a new citizenship law that discriminated against Muslims, and its Islamophobic attitudes recently encouraged some schools and colleges to impose a headscarf ban on students.

These discriminatory policies have a global significance because India has the world’s third-largest Muslim population, after Indonesia and Pakistan. Out of the estimated Indian population of 1.4 billion, about 210 million – 15% – are Muslim.

As a Muslim, I am aware of the deep reverence for Prophet Muhammad, and I understand Muslim individuals’ resentment. The reaction of Muslim governments, however, reflect their political regimes. As my book “Islam, Authoritarianism, and Underdevelopment” explains, most Muslim governments are authoritarian and concentrate on condemning sacrilege against Islam – more than advocating to protect the rights of Muslim minorities abroad.

The recent Indian case focused on Aisha’s age when she married the Prophet. Aisha is one of the most important, vigorous and powerful figures in Islamic history. The favorite wife of the Prophet, she was the daughter of the Prophet’s successor and closest friend, Abu Bakr. She became a leading narrator of hadith – the records of the Prophet’s words and actions – the teacher of many scholars and a military leader in a civil war.

According to a hadith record, Aisha was 9 years old when she got married. Some Muslims accept this record and see it normal for a pre-modern marriage, whereas other Muslims believe that Aisha was either 18 or 19 years old by referring to other records.

It is not possible to know the true facts of Aisha’s age. As Islamic scholar Khaled Abou El Fadl stresses, “we do not know and will never know” them. Sharma thus used a single narration, while ignoring alternative Muslim explanations, in her remarks.

This is not the first time that Muslim governments have reacted to defamatory actions against the Prophet. The long list of incidents includes Iran’s Supreme Leader Ruhollah Khomeini’s 1989 call on Muslims to kill novelist Salman Rushdie and the 2006 boycott of Danish products throughout the Middle East in reaction to a dozen cartoons published in a newspaper.

An interesting pattern is visible in Muslim governments’ attitudes: They are very vocal when it comes to the cases of verbal or artistic attacks on Islamic values, whereas they are generally silent about human rights violations against Muslim individuals.

Muslim individuals in India have complained about the violations of their rights for almost a decade, but Muslim governments did not show a noteworthy reaction to the BJP until this defamation incident. 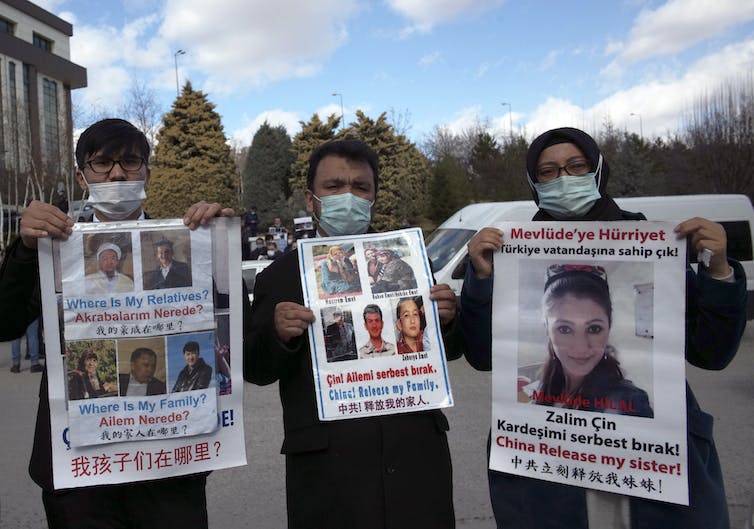 Uyghur protesters, saying they had not heard from their relatives in years, protest near the Chinese Embassy in Ankara, Turkey, in Feb. 2021.
AP Photo/Burhan Ozbilici

Another example is China, which has been persecuting 12 million Uyghur Muslims for many years. No Muslim government showed any major reaction. Instead, these governments have focused on their material interests and disregarded how the Chinese state treats its Muslim minority.

This double standard can be explained by the widespread authoritarianism in the Muslim world. Out of 50 Muslim countries, only five are democratic. Most authoritarian governments in the Muslim world have blasphemy laws that punish sacrilegious statements and suppress dissenting voices. That these governments should demand the punishment of blasphemy and defamation from India or other non-Muslim countries follows from these policies.

Another characteristic of authoritarian Muslim governments is their own violations of the rights of religious and ethnic minorities. In Pakistan, these violations have targeted the Ahmadiyya, Shia, Hindu and some other religious communities, while in Iran, ethnic minorities, including Azerbaijani Turks, Baluchis and Kurds, faced discrimination in education and employment. A rights-based discourse abroad, therefore, would contradict these governments’ policies at home.

Authoritarianism in the Muslim world has tragic consequences for Muslim minorities in India and elsewhere. Muslim governments’ short-term, emotional reactions to some defamation cases do not help improve the conditions of Muslim minorities, who actually need a more consistent and principled support.

(Ahmet T. Kuru, Professor of Political Science, San Diego State University. The views expressed in this commentary do not necessarily reflect those of Religion News Service.)