(The Conversation) — The United States celebrates Father’s Day on the third Sunday of June. Many countries with a Catholic heritage, however, such as Portugal and Spain, have already honored fathers on March 19: the feast of St. Joseph, husband of Mary and patron saint of fathers.

Joseph is easy to overlook. None of his words were included in the Christian Bible. In Islam, the Quran omits him entirely, though it does include Jesus and Mary by name; in fact, it refers to Mary more than the Christian Gospels do. And while Catholic tradition gives the highest veneration to the Virgin Mary, it gives less emphasis to Joseph’s significance – there is even a joke that a Sunday school student thought Jesus’ parents names were “Verge ‘n Mary,” after hearing her name so much more than his.

However, the Bible portrays St. Joseph playing a crucial role in the life of Jesus Christ, the founder of Christianity. In Catholic culture, Joseph is still an important role model of fatherhood and faith.

Husband of Mary, father of Jesus – on earth

The bulk of the biblical descriptions of Joseph come from what are called the Infancy Narratives in the Gospels of Matthew and Luke, which describe Jesus’ birth and childhood.

According to the Gospels, Mary, a virgin betrothed to Joseph, conceived Jesus by the power of the Holy Spirit – and therefore Christians consider Jesus the Son of God. However, most Christians understand Joseph to be a true father in every way except biological, since Joseph was the legal father who raised Jesus.

As someone who studies Catholic beliefs about Mary, I have argued that interpreting their “betrothal” as a modern-day “engagement” is incorrect. The Jewish custom in that time period involved a two-stage marriage: first a legal contract of marriage, followed later by a party with the husband taking his wife into his home. This is shown in the Gospels: Joseph learned that Mary was expecting before she came to live with him, so he planned to divorce her; but an angel instructed him not to, and instead to take his wife into his home. Therefore, Joseph was already Mary’s legal husband at the time Jesus was conceived. 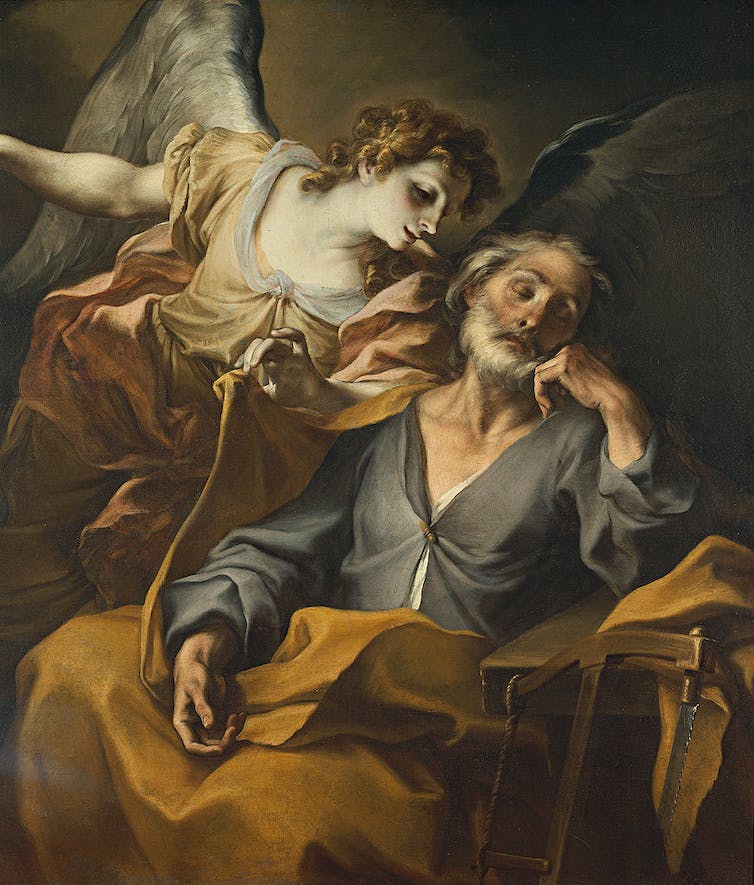 Some Christians believe that after Jesus’ birth, Mary and Joseph had several children together. The Gospels mention brothers and sisters of Jesus. However, Catholics and Orthodox Christians hold that these verses refer to other relatives, not actual siblings. Jesus taught that children have an obligation to support their parents, but when he was dying, he entrusted Mary to the care of his Apostle John, not a sibling.

Catholics believe Mary and Joseph had what the Catholic Church calls a “Josephite marriage” – that is, one that meets Catholicism’s requirements for a true marriage, such as fidelity, but does not involve sexual intercourse.

Like any parent, Joseph had his challenges. At one point, for example, he and Mary lost track of the 12-year-old Jesus for three days while they were traveling. But in Catholic teachings, he models faithful fatherhood. Joseph provided for his family as a carpenter, and followed God’s instructions to care for them. He named and circumcised his son, presented him at the Temple in Jerusalem, and took him to the Temple on holy days when possible, all in line with Jewish law. Joseph also protected Jesus from Herod, the King of Judea who wanted to kill the child, by taking Mary and Jesus to safety in Egypt and then Nazareth.

For Catholics, Joseph is the second-greatest saint after Mary, because only she knew, loved and served Jesus more than Joseph. In 1870, Pope Pius IX declared Joseph the patron saint of the entire Catholic Church.

The Catholic liturgical calendar has two days just for him. Joseph’s primary celebration honors him as the husband of Mary, and takes place March 19. It is a “solemnity” – a global celebration requiring specific liturgies – and in some countries, Catholics are obligated to attend Mass. Many Italians celebrate the day with a St. Joseph’s Altar or Bread Table providing free food to all, as a way to thank the saint for his help.

May 1 is an optional feast that honors Joseph in his role as a worker. Pope Pius XII established this celebration in 1955 to give a Christian dimension to International Workers Day, also known as International Labor Day or May Day, and counter its Marxist roots.

Joseph also shares in the universal feast of the Holy Family of Jesus, Mary and Joseph on the Sunday after Christmas, as well as some local commemorations. For example, the Oblates of St. Joseph, a community of priests and religious brothers, celebrates Joseph and Mary’s wedding on Jan. 23.

In 2020 an American priest, the Rev. Donald Calloway, published a popular book called “Consecration to St. Joseph.” This guide encourages Catholics – many of whom traditionally devote themselves to Mary – to also consecrate their lives to Joseph, as their spiritual father. Calloway outlines a 33-day program to prepare readers for a ceremony entrusting themselves to Joseph’s care. 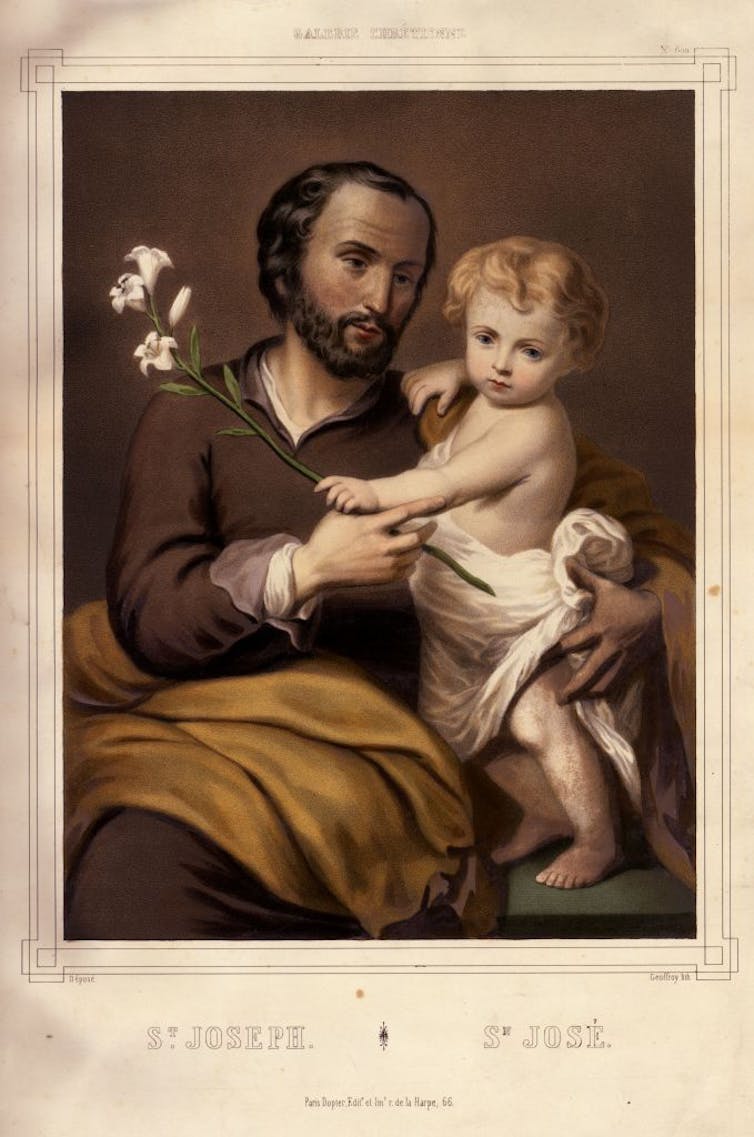 Afterward, Calloway wrote to Pope Francis and asked him to declare a “Year of St. Joseph” for the church. The pope has not spoken about whether this letter influenced him, but Francis did proclaim Dec. 8, 2020, to Dec. 8, 2021, the first-ever Year of St. Joseph, a time for Catholics to deepen their knowledge of the saint and to pray for blessings from God through Joseph’s intercession.

Francis wrote a public letter called “With a Father’s Heart,” which highlights Joseph’s paternal qualities, such as tenderness, courage, and being self-giving. “Fathers are not born, but made. … Whenever a man accepts responsibility for the life of another, in some way he becomes a father to that person,” Francis wrote.

Joseph is considered the patron of a happy death because the Bible implies that he died in the company of Jesus and Mary, before Jesus’ ministry and death. But in life, too, Catholicism sees Joseph as an encouraging ideal: a man who carried out his important role in the family with hope and joy.

(Gloria Falcão Dodd, Research Professor, University of Dayton. The views expressed in this commentary do not necessarily reflect those of Religion News Service.)