VATICAN CITY (RNS) — While Pope Francis said he has “no intention of resigning,” he laid out a broad view of what it would look like if he stepped down as pontiff in a long interview published on Tuesday (July 12). Francis also weighed in on many hot button topics in America, from abortion to mass shootings and drug trafficking.

The pope told the Mexican media outlet TelevisaUnivision that his knee troubles, which forced him to use a wheelchair for a short time, raised concerns he might not be able to perform his papal duties. “It’s getting better. Now I can walk,” he said. “But it never occurred to me to quit.”

Francis admitted his health struggles have “certainly limited” him in his role recently, namely in leading him to postpone a planned trip to two countries in Africa, but he insisted he has no intention of stepping down at the moment.

He did say that if he were no longer able to perform his duties, or if “I become a hindrance,” he would follow in the example of his predecessor Emeritus Pope Benedict XVI, who in 2013 became the first pope to resign in 600 years.

“I hope that the strength of that example will help me make the decision,” he said. Pope Francis spoke highly of Benedict, who having added the title emeritus to his name continues to wear the white clothing of the pontiffs and lives in a monastery in the Vatican. “That man is supporting the church with his kindness and with his retirement,” he said. 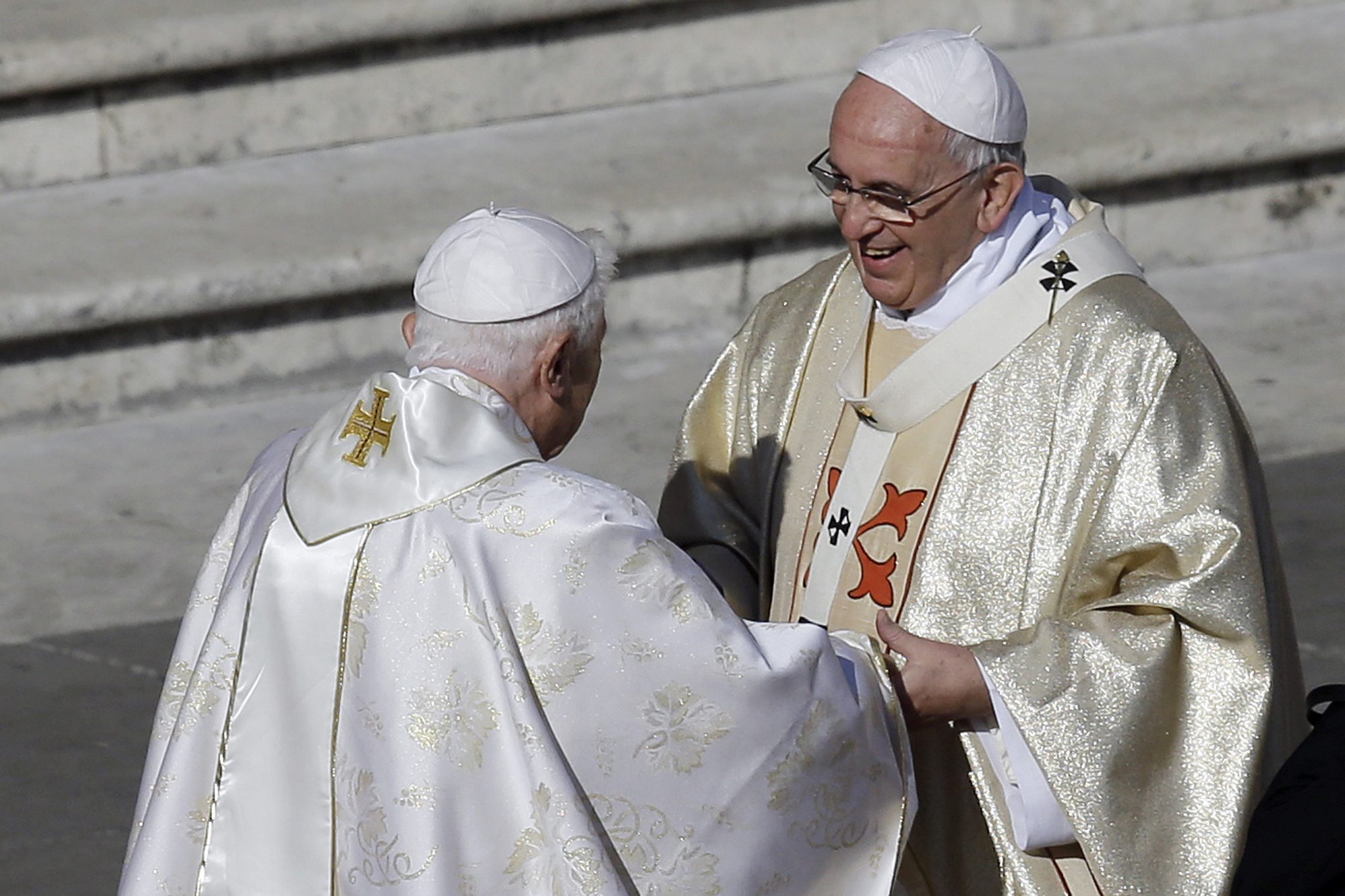 Pope Emeritus Benedict XVI, left, greets Pope Francis prior to the start of the beatification ceremony of Pope Paul VI and a Mass for the closing of a two-week synod on family issues, in St. Peter’s Square at the Vatican, Oct. 19, 2014. Pope Francis has said that if and when he ever retires, he wouldn’t live in the Vatican or return to his native Argentina but would like to find a church in Rome where he could continue hearing confessions. “I’m the bishop of Rome, in this case the emeritus Bishop of Rome,” Francis said in an interview broadcast Tuesday, July 12, 2022, with Spanish-language broadcaster Univision. (AP Photo/Gregorio Borgia, File)

According to Francis, the precedent set by Benedict does open the door for popes to resign — but with that possibility comes the need “to delineate things more” and create explicit guidelines for the role of the emeritus pope, he said, calling the initial framework created by Benedict a “first step.”

But Francis said if he were to retire, he would would not remain at the Vatican but would instead return to the retirement plan he’d laid out before being elected pope, spending the rest of his days as bishop emeritus in a home for priests in a Roman parish, living “in service to the people.”

“If I survive, I would like something like this: Confess and go see the sick,” Francis said.

In the two-hour interview, Francis also touched on a number of pressing issues concerning the United States, especially abortion, which has taken center stage after the Supreme Court overturned Roe v. Wade in June, handing decisions around legalizing abortion back to the states.

While admitting he’s not knowledgeable on the U.S. legal system, Francis asked: “Is it fair to take a human life to solve a problem? Whatever it is? Is it fair to hire a hit man to eliminate a human life?” The pope referenced scientific research he said shows that “one month after conception, the DNA is already there,” while adding his position on this issue is “nonnegotiable.” 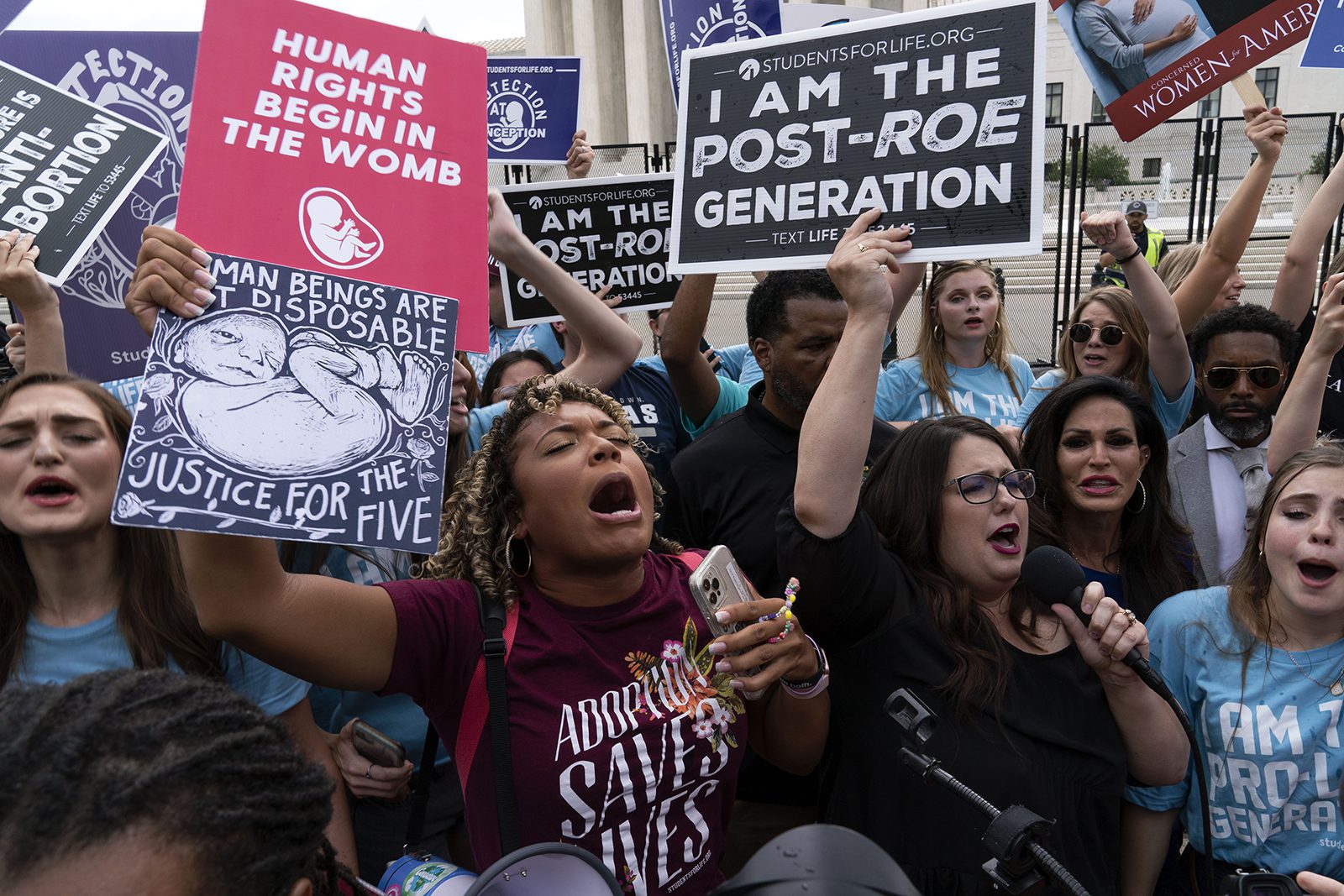 Anti-abortion protesters gather outside the Supreme Court in Washington, June 24, 2022. The Supreme Court has ended constitutional protections for abortion that had been in place nearly 50 years, a decision by its conservative majority to overturn the court’s landmark abortion cases. (AP Photo/Jose Luis Magana)

But the pontiff noted how polarizing the issue is and the risk of losing sight of the pastoral and human dimension, especially when clergy turn it into a “political problem.” Some conservative bishops in the United States have denied Communion to Catholic politicians who support abortion rights, including President Joe Biden and Speaker Nancy Pelosi, while encouraging others to follow their lead.

Concerning whether a politician supporting abortion rights should take Communion, Francis said he leaves it “to your conscience,” and a politician should “speak with his bishop, with his pastor, with his parish priest, about that inconsistency.” The pope added that faithful are more confused by the political attitude of bishops who are “so focused on an issue they can’t see past their own nose.”

The pope also addressed the recent mass shootings in the United States, including the Independence Day parade shooting near Chicago, pointing to the “serious social problem” that led these young men to commit such acts of violence. Francis called such actions “diabolical” and questioned why “young people are so dissatisfied that they feel fulfilled only by destroying.”

The proliferation of weapons is tied to the culture of war, the pope said, and raises the question of how to monitor the sale of weapons. This culture of violence permeates all societies, he added, including the drug cartels in Mexico where many priests are killed every year. 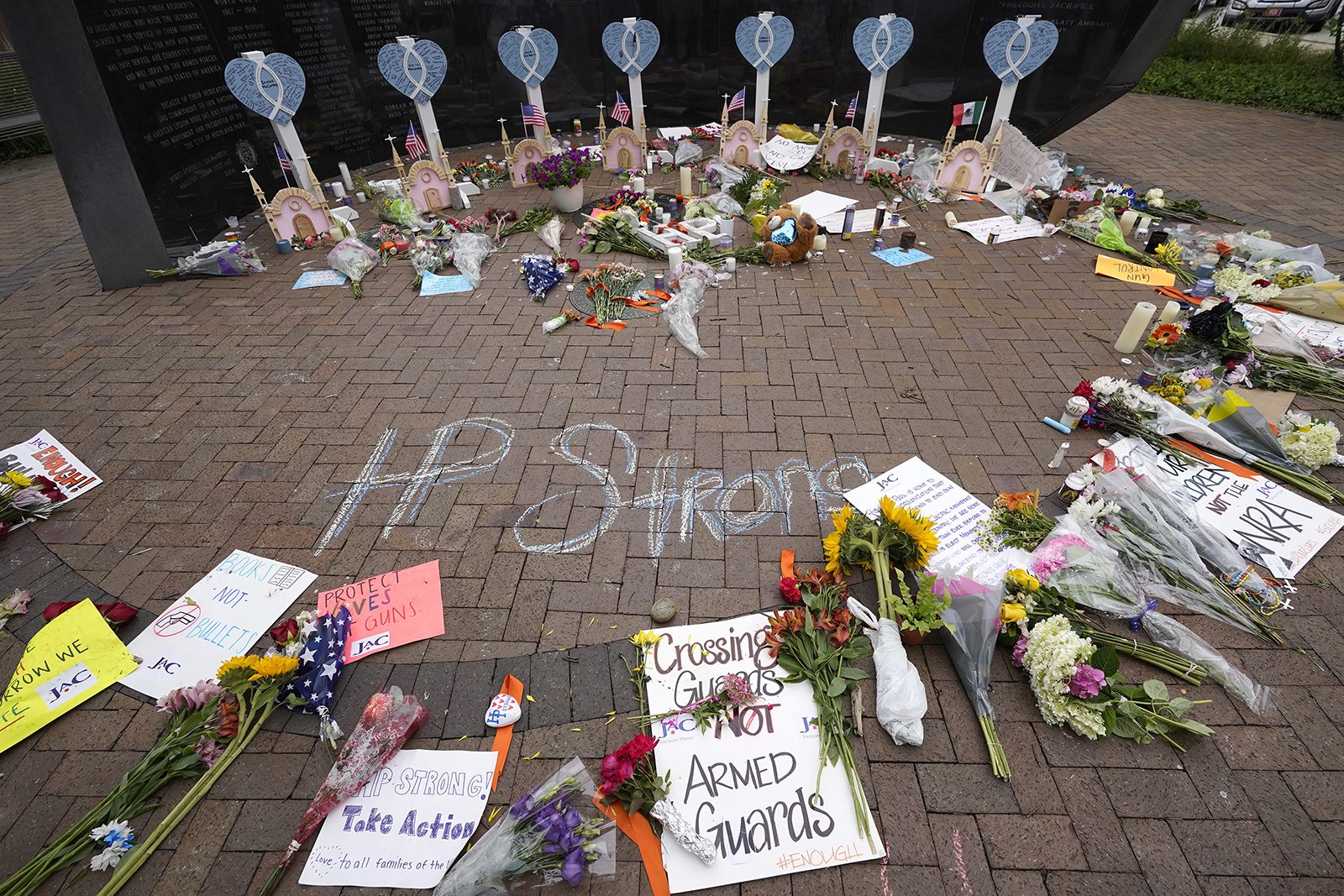 A memorial to the seven people killed and others injured in the Fourth of July mass shooting grows at a veterans memorial July 6, 2022, in Highland Park, Illinois. (AP Photo/Charles Rex Arbogast)

While the war in Ukraine has garnered global attention, the pope said, “for years we have been living the Third World War in bits, in chapters, with wars everywhere.” Asked why he didn’t directly condemn Russia and its leader, President Vladimir Putin, for the aggression, the pope said he prefers “to talk about the victims rather than the perpetrators.”

Accusing Russia “is not a way to keep the door open to someone’s conscience,” he continued, adding that he “laughs” when detractors accuse him of being pro-Putin. “People’s ability to express their opinion has no limit,” he said, adding such pronouncements are more often than not a response to the latest message they saw on Twitter.

The pope said he still plans to visit the Ukrainian capital of Kyiv “soon” and plans to meet with the Russian Orthodox Patriarch Kirill during a religious meeting in Kazakhstan in September. Francis also said he plans to apologize to the Indigenous peoples when he visits Canada July 24-31 for the “cruelty” of those who tried to eliminate their culture, including Catholic clergy.

On the question of the inclusion of women in the Vatican offices that make up the Roman Curia, Francis said “the door is open” for a woman to one day occupy the second highest position at the Vatican as secretary of state. Francis’ new apostolic constitution, “Praedicate Evangelium” (Preach the Gospel), allows for lay individuals to lead Vatican offices and departments.

The pope also said “the pot has been uncovered” concerning the sexual abuse of minors and vulnerable adults in the Catholic Church, but the problem will persist as long as we live in a society where people continue to be physically and psychologically abused.

Francis also touched on the subject of human traffiking and migration, urging people to show compassion and avoid generalizations. “Human dramas have a face,” the pope said. “Let’s make decisions by looking at the faces of those people.”

RELATED: The patriotic Virgin: How Mary’s been marshaled for religious nationalism and military campaigns