(RNS) — During the last four years, the president of The Church of Jesus Christ of Latter-day Saints has introduced a host of changes that have made the church a little more mainstream, a little less weird.

We now attend church for two hours a week instead of three.

We no longer require young couples who marry in weddings outside the temple to wait an entire year before they can be sealed inside the temple. This means they’re free to have celebrations that involve non-Mormon family members and friends before they engage in smaller, more private temple rituals.

And of course, we don’t talk about becoming gods of our own planets someday, or any of the more esoteric theological teachings of our past. Leaders nowadays rarely exhort us about imminent cataclysms — we don’t speculate openly about how we’re living in the end times, talk about the latest Antichrist who’s arisen in geopolitics or require members to store two years’ worth of food in preparation for the apocalypse.

Mostly we emphasize being good people who love our families, help our communities and strive to do right by Jesus Christ, our savior.

We’re boring, and most Mormons like it that way.

Except that we don’t call ourselves Mormon anymore. We’re members of The Church of Jesus Christ of Latter-day Saints. (We’re so boring, in fact, we’ve put time and thought into insisting in our official style guide that the definite article that begins the denomination’s name be capitalized.) 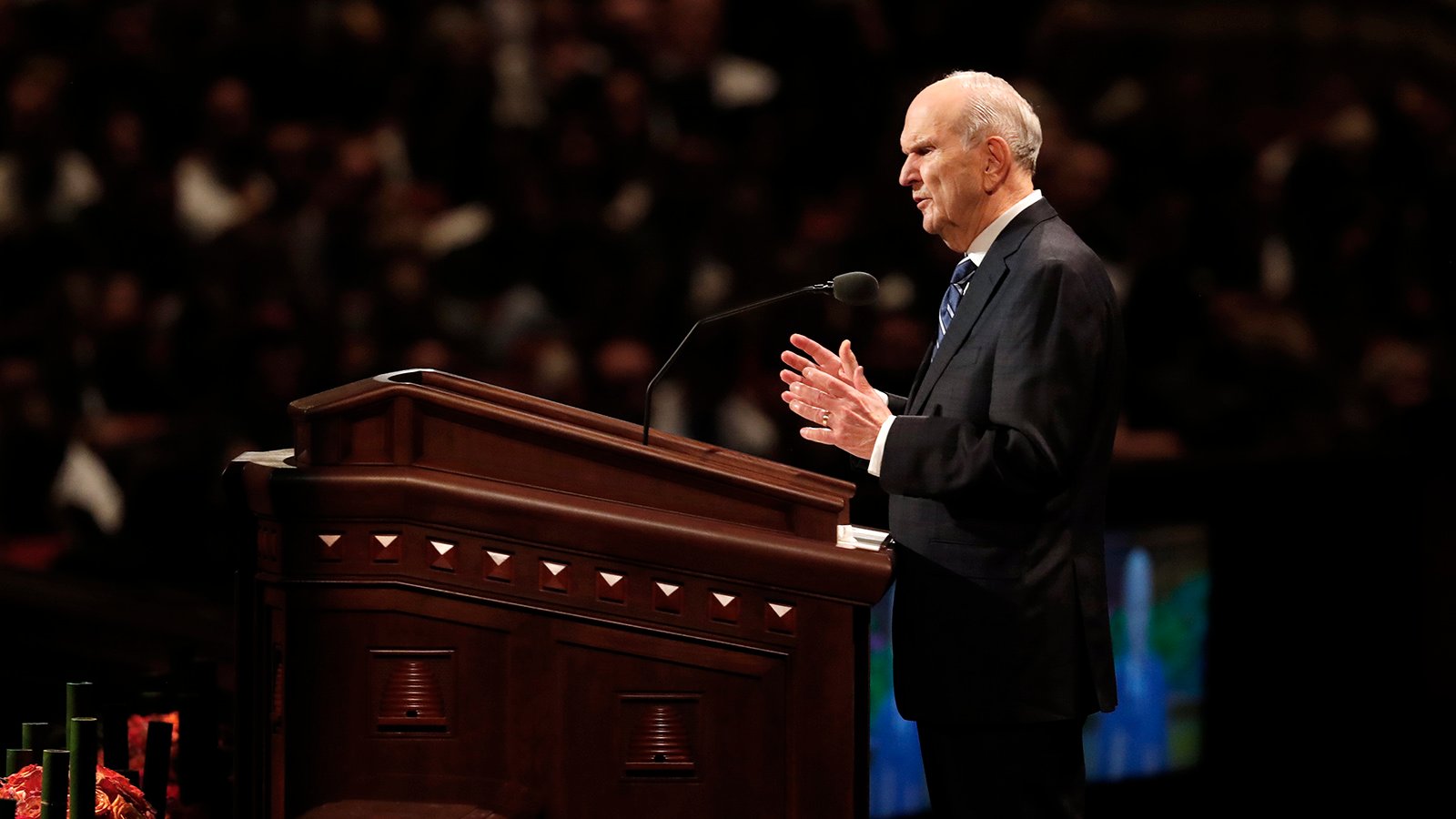 President Russell M. Nelson explains why the church’s name is The Church of Jesus Christ of Latter-day Saints at the Sunday morning session of the 188th semiannual general conference on Oct. 7, 2018, in Salt Lake City. Photo © 2018 by Intellectual Reserve Inc.

When President Russell M. Nelson announced four years ago we would no longer be using the word “Mormon” — that, in fact, it was a victory for Satan whenever someone referred to the “Mormon” church — I scratched my head in confusion. Although President Nelson had personally objected to the word “Mormon” since at least 1990, the church as an institution had only recently engaged in not one but two blitz media campaigns around that very term: the brilliant “I’m a Mormon” effort to demystify church members by showing ordinary people telling their own faith stories, and the church-produced documentary “Meet the Mormons” in 2014.

So to renounce the word “Mormon” was an about-face that made little sense given the tremendous work the church had just put into associating that word with everything positive about our people. Overnight, what had been an affectionate term used by members and nonmembers alike became verboten. Some members even began to claim, ridiculously, that its usage was akin to a racial slur.

While I’ve appreciated the idea of having our language be more Christ-focused, we’ve been largely unsuccessful in changing how anyone outside the church talks about us. Journalists still use “Mormon” in headlines, as evidenced by these two from just this week — one on church members in Yorkshire, England; and the other on how the “Mormon” cricket got its name from a famous episode in Utah history. 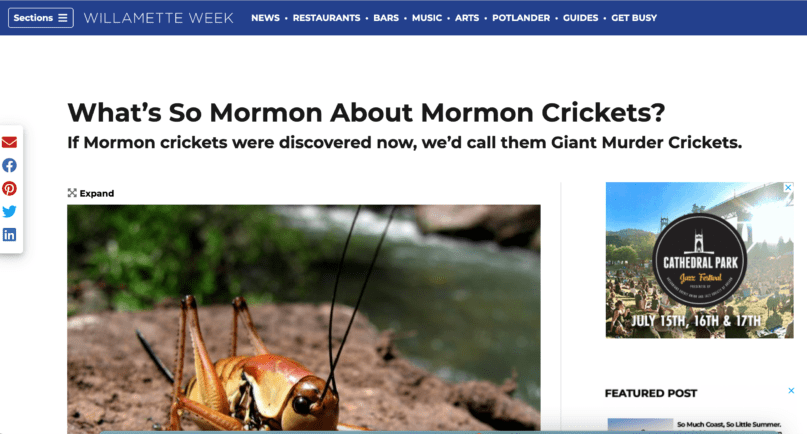 A July 9, 2022 headline about “giant murder crickets” — aka Mormon crickets — in Eastern Oregon.

The fact that journalists use “Mormon” does not mean they’re intentionally disrespectful, or that they’re ignorant of the church’s sudden change in direction. Journalists serve a broad audience of people who are going to continue using the term they’ve always used in thinking about Mormons — the very language, in fact, the church itself was encouraging them to employ not long ago.

In the last four years since the change, I’ve been periodically tracking the use of “Mormon” and “Latter-day Saint” in Google searches. “Mormon” used to outweigh “Latter-day Saint” by 43 searches-to-1. Now it appears to be 40-to-1, which shows a bit of movement but is an awful lot of victories for Satan. Language takes a long, long time to change.

The effort has also been unsuccessful in uniting us as a people, if that was the goal. If anything, it has driven a new wedge of judgment, giving members a convenient shibboleth by which to measure whether someone else truly belongs. Some members feel quite free to correct the language of any and all who still use “Mormon.” They take pains to explain there’s no such thing as a Mormon, not really, not anymore, and that in reality there are only members of the — excuse me, The — Church of Jesus Christ.

That preferred new language is confusing — which church of Jesus Christ? It’s not like there’s only one denomination that follows Jesus. The new suggested language just makes us sound like everyone else.

I have finally done the requisite dope slap and realized that making us sound like everyone else was a major part of the point of President Nelson’s rebranding-that-he-clarified-was-not-a-rebranding. That it wasn’t a bug so much as a feature.

On the whole, President Nelson’s various changes in the church have succeeded in helping the institution exist more comfortably in the world. Years ago, sociologist Armand Mauss proposed the thesis that Mormon history has swung back and forth between periods of retrenchment (which he called “the angel”) and assimilation (“the beehive”).

In retrenchment phases, we hunker down in our own subculture and focus on what’s unique about our religion — on what can save us from the darkness of the world. In times of assimilation, we engage with the world and see ourselves at home in it. We are more accommodating in tweaking our culture and even our beliefs to continue to be at home in that world. Sometimes these nods to assimilation can be small changes, like two-hour church or relaxing missionaries’ dress codes. Sometimes they are dramatic and affect what we had seen as core doctrines, like when we abandoned the practice of polygamy. 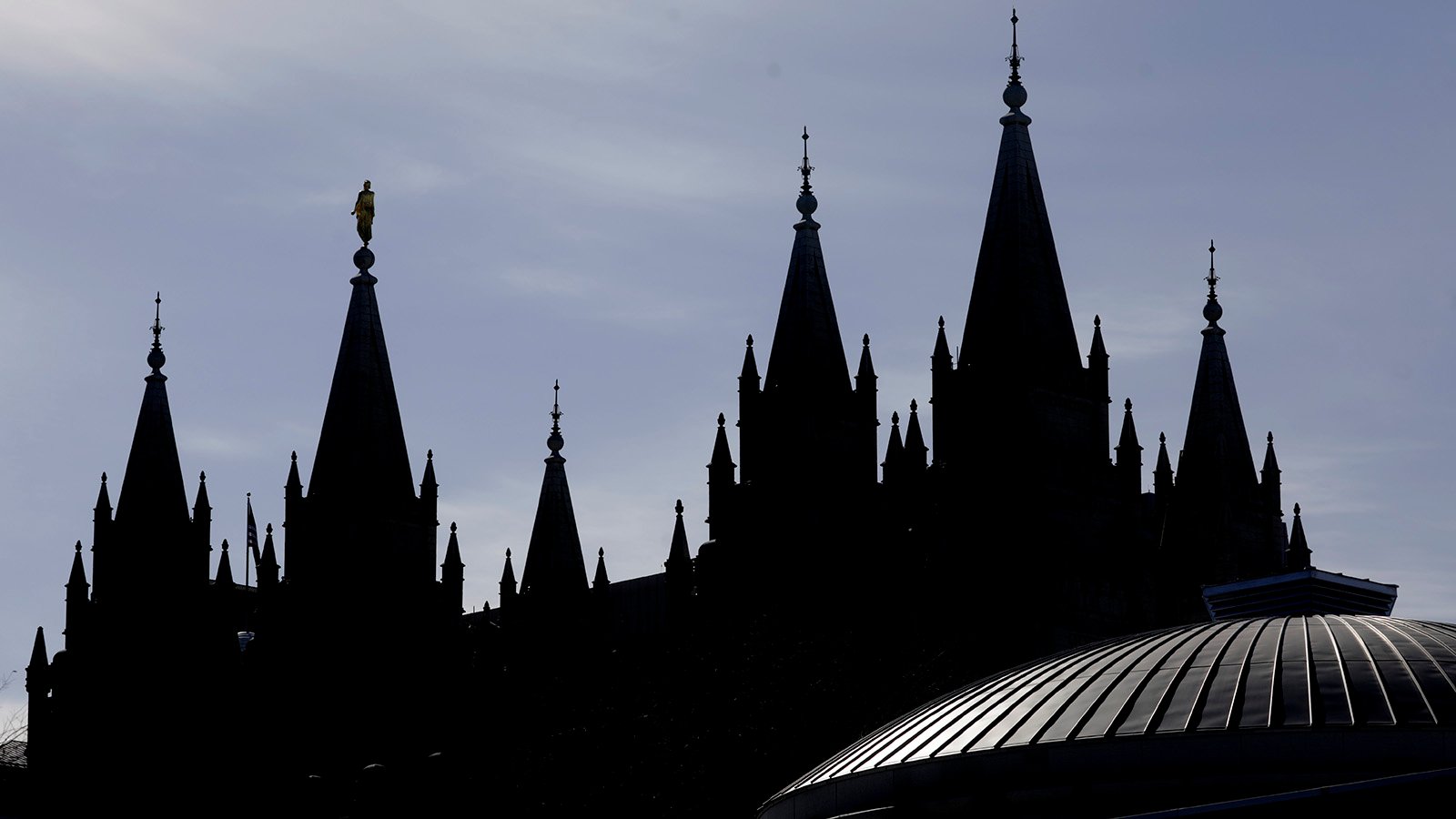 The Salt Lake Temple of The Church of Jesus Christ of Latter-day Saints is shown April 4, 2020, in Salt Lake City. (AP Photo/Rick Bowmer)

We’re in an assimilation phase, a “we’re not weird” phase. Shedding the term “Mormon” helps us to assimilate ever more comfortably because the word, with its accompanying history, is one of the most distinctive things about us.

Getting rid of it also distances us from polygamous groups from whom LDS leaders have long tried to consciously uncouple. (Haven’t heard of conscious uncoupling as the new preferred term to use instead of breakup or divorce? Consider that an example of how many years it takes for language to change.)

I’m still not a fan of the attempt to purge “Mormon” from our vocabularies. The effort has proved to be spiritually divisive as well as pragmatically impossible to implement outside the church’s own publications. What’s more, it makes the whole large-tent Mormon experience about the small-tent LDS Church.

Doubling down on the traditional, full name of our church may not make us more appealing to potential converts, at least in this country. Sociologist Ryan Burge noted recently that in the U.S., every single Protestant denomination suffered declines over the last decade, and the only Christian group that is growing is nondenominational. So while there are fewer Baptists and Methodists and Presbyterians, within the Christian audience is a growing share of “just Christian” folks who don’t identify with a particular denomination.

I don’t think insisting on the “correct” name of the no-longer-Mormon church is necessarily the best way to reach those people who, as Burge put it, “are increasingly telling us they don’t like the idea of ‘The Church.’” But the move makes sense as a piece of the larger assimilation puzzle. Emphasizing denominationalism may not win converts, but jettisoning “Mormon” makes us appear that much closer to mainstream.

The top 10 changes Russell M. Nelson has made in the LDS Church

The battle lines around the word ‘Mormon’

News
‘We’ll be back’: CBN vows to keep fighting ‘wokeism’ and women preachers in SBC
Follow us on Facebook!
Submit your photos to RNS