(RNS) — Every so often in a gathering of faith leaders, I’ll be asked my opinion on the Abraham Accords, the treaties negotiated in 2020 that normalized relations between Israel and some of its former antagonists in the Arab world — Bahrain, Morocco, Sudan and the United Arab Emirates.

When, to the surprise of many, I react with a strong rejection, my perplexed colleagues seem to want to ask, “Isn’t peace a good thing?” or “What’s wrong with unity among Jews, Muslims and Christians?” The naming of the accords after Abraham (peace be upon him) and the images of leaders of different faiths shaking hands strike many sincere people as a welcome development with no nefarious intent.

The problem is that these accords have nothing to do with coexistence, and they ignore entirely the Palestinian existence. As I have written before, you cannot oppose Islamophobia here and call for an Abrahamic tent, then use its same tropes and framings to dehumanize the Palestinian people and remove them from their homes. I oppose apartheid, not Abraham.

As President Joe Biden makes his trip through the Middle East with his first stop in Israel, the Abraham Accords are once again being invoked as some sort of solution to the Israeli-Palestinian crisis and, more broadly, Israel’s relationship with its Arab neighbors. The child of the Trump era, the Abraham Accords basically saw brutal authoritarian regimes come to terms with Israel, which from the Palestinian perspective looks much the same. The Biden administration has failed to stop or even slow the detrimental American foreign policy that came out of it.

But this policy predates former President Donald Trump, and even former President Barack Obama. The rights of Palestinians have been consistently disregarded by Republican and Democratic administrations alike, despite the growing outcry of human rights organizations around the world. The accords are in many ways a continuation of Bush-era policy that saw the world split into a war between an Axis of Moderates and an Axis of Evil, and saw alliances formed solely based on America’s interests, without any regard for human rights.

Trump simply did for U.S. policy on the Palestinian cause what he did with many other barely veiled American foreign and domestic policies — he made its intentions clear. America, it became apparent, never had any intention of being any sort of honest peace broker. His administration sought to cement the erasure of Palestinians from Jerusalem and by moving the American Embassy to Jerusalem, declare the Palestinian presence irrelevant. 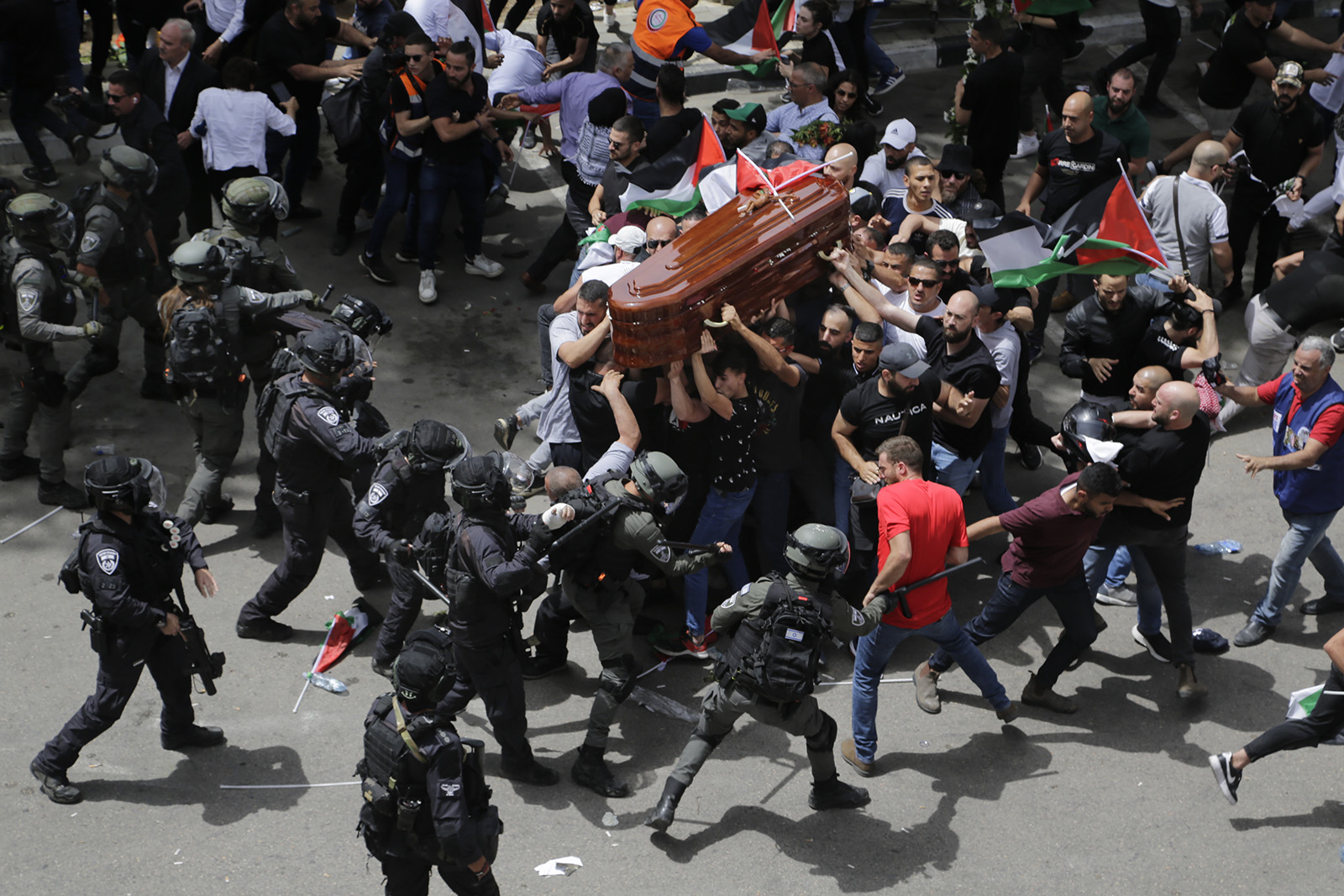 Israeli police confront mourners as they carry the casket of slain Al Jazeera veteran journalist Shireen Abu Akleh during her funeral in east Jerusalem, Friday, May 13, 2022. Abu Akleh, a Palestinian-American reporter who covered the Mideast conflict for more than 25 years, was shot dead during an Israeli military raid in the West Bank town of Jenin. (AP Photo/Maya Levin)

Biden hasn’t heeded the calls of international and even Israeli human rights organizations to reverse course, despite significant developments on his watch. Human Rights Watch and Amnesty International have both declared Israel an apartheid state. Shireen Abu Akleh, an American journalist, was shot and killed by Israeli forces, according to numerous independent investigations, and then her funeral was attacked as she continued to expose the crimes of the regime even in death.

RELATED: The UN’s positions on Israel are not gospel. Why do Christians cite them?

The misuse of the name of Abraham to justify the abuse of the Palestinians makes this all the more egregious. Theologically, the idea of one Abrahamic religion that magically erases all differences as a solution to the world’s problems is in itself offensive to serious adherents of Christianity, Judaism and Islam. We can still work together for a better world without betraying the tenets of our own faiths.

But there is also the greater narrative at play here. The brutal regimes of the accords are all vying for American aid for their own ugly military ventures, in exchange for turning their backs on Palestinians. Meanwhile, Palestinians are left out of any discussion about their own fate. Does that look like peace to you?