(RNS) — This summer’s made-for-TV Congressional hearings have outlined a seven-step plot to overturn the results of the 2020 presidential election. Days of testimony have revealed astonishing details about the determination of former President Trump to subvert democracy.

But the bigger revelation of these hearings may be the extent of the network that preemptively sowed the seeds of the “Big Lie,” fed millions of Americans a steady stream of misinformation, developed the legal theory to justify a coup and mobilized thousands of Americans to storm the U.S. Capitol.

Whether Trump is charged or convicted, this network has fomented a populist movement determined to dismantle the institutions of American democracy. We fail to take the threat of this network seriously if we do not identify the kind of movement that can overcome it.

Most reporting on Donald Trump’s base has located his MAGA movement in the tradition of American populism. Stagnant wages and a decline in U.S.-based manufacturing are often cited as factors that have both made life more difficult for millions of Americans and led to dissatisfaction with conventional politics. Trump and other extreme politicians have used racist and xenophobic tropes to make a popular appeal to everyday people in middle America: “I and I alone can fix it,” in the memorable phrase of Trump’s 2016 campaign. Clearly, this strongman appeal has gained the confidence of some who feel vulnerable.

But the election data from 2016 and 2020 is clear that a majority of poor and low-income voters who earn less than $50,000 a year did not buy the brand of populism that Trump and Co. were selling. As we have organized with the Poor People’s Campaign in low-wealth communities across the nation, we have seen firsthand that, while economic discontent and political dissatisfaction are real, poor communities are ripe for a different kind of popular movement that confronts divisive lies and builds broad coalitions for the common good.

Greys Harbor, Washington, is an example of a rural, predominantly white community in Western Washington where we’ve seen this alternative, “moral fusion” populism offer people a different, concrete political path. Greys Harbor has a higher percentage of youth homelessness than any community in the country, and many of the people who live in its tent cities have spent time in the criminal justice system. Inside the local jail, Christian nationalists recruit young white people into a culture that blames immigrants and Black people for their economic problems, while assuring them that right-wing politicians and “better choices” will give them a better future. 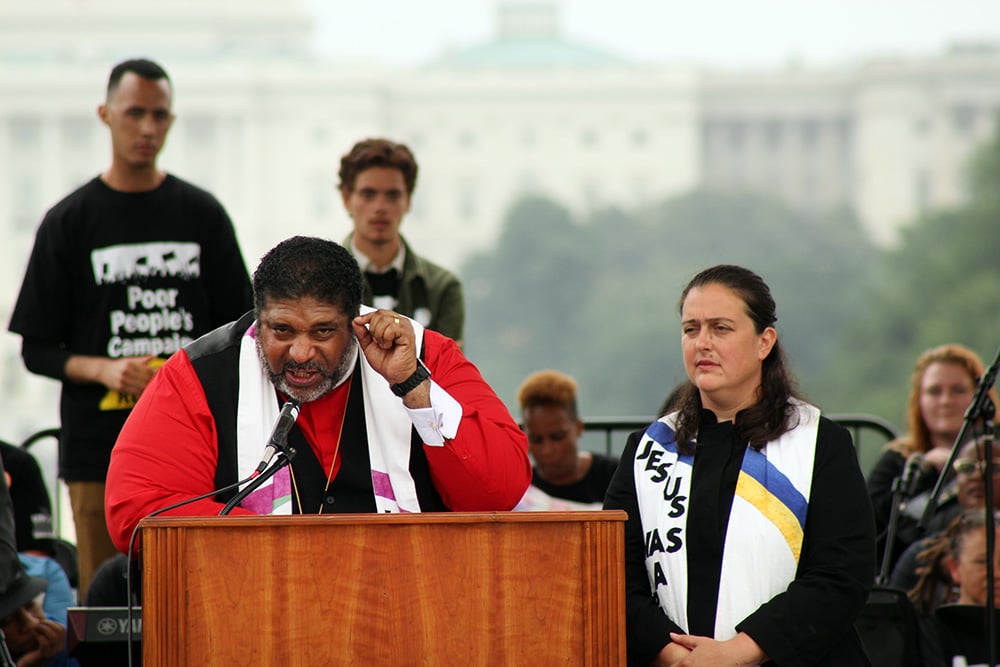 Organizers with the Poor People’s Campaign have spent time counter-recruiting in the same jail, inviting Black, white and Brown people to organize together in a fusion coalition for a more just distribution of COVID relief funds and local community development that lifts from the bottom so everyone can rise. The same people who are being recruited into MAGA world, we’ve seen, can also be invited into a local vision of radical democracy.

Across the country, in eastern Kentucky, we saw a similar fusion coalition emerge to turn out voters in the 2019 gubernatorial race there. Andy Beshear, a Democrat, was running against incumbent Republican Matt Bevin, whose campaign used many of the same tropes of Christian nationalism to appeal to rural white voters in eastern Kentucky. But local activists concerned about disinvestment in their communities joined hands with Black and Brown organizers from Louisville and Lexington and helped increase turnout in three so-called “red counties” that flipped them for Beshear. He won the state-wide race by 5,200 votes and, in his victory speech on election night, echoed the language of moral fusion organizers by insisting that “our elections don’t have to be about right versus left. They are still about right versus wrong.”

When we look at the history of populist movements in the United States, the basic needs of everyday people have often been manipulated by monied interests through divisive tactics like those deployed by Trump. The Bonus Marches that followed World War I were led by veterans who had not received the benefits promised to them when they left their families to risk their lives in Europe. These protests represented a popular uprising for living wages that resonated broadly with the labor movement of the early 20th century.

But many veterans in the Bonus Marches were exploited by wealthy business interests who tried to channel their concern for their own well-being toward an “America First” movement that blamed non-white immigrants for working people’s troubles and encouraged a nationalism that would back extreme, pro-corporate politicians. That anti-democratic populist movement, though extremely well-funded, was defeated by a popular fusion movement of diverse progressive coalitions that built the infrastructure for the New Deal.

Last summer, when we organized a march across Texas to protest the voter suppression bill that Governor Greg Abbott had signed into law there, we saw the potential for a similar fusion coalition. Citizens groups that had organized after the power grid failed in Texas joined together with members of civil rights organizations, low-wage workers who have organized new unions during the pandemic and students impacted by school shootings.

For decades, the moral narrative in places like Texas has been dominated by debates about abortion and human sexuality. But in the face of an explicitly anti-democratic Christian nationalism, a new moral fusion coalition brought 10,000 people to the Texas Statehouse under the summer sun to insist it is immoral to deny everybody has a basic right to live, to love and to care for their own families and communities.

For decades, the March for Life in Washington, D.C., has been an annual marker of the religious right’s determination to build a coalition that would assert their extreme, anti-democratic vision of America over the will of the people. In many ways, that assembly represents the populism that gave rise to Trump and his Big Lie — the movement that has now, after more than 40 years of organizing, overturned Roe v. Wade.

On June 18 this summer, we stood at the base of the Capitol and watched tens of thousands of people march up Pennsylvania Avenue with the Poor People’s Campaign, representing this moral fusion movement we have witnessed in some of America’s poorest communities. Before that beautifully diverse crowd, it was clear to us that the prosecution of the crimes of Jan. 6 alone will not save American democracy.

We need a movement big and broad enough to capture the imagination of everyday people and deliver policies that make life more sustainable for them and their communities.