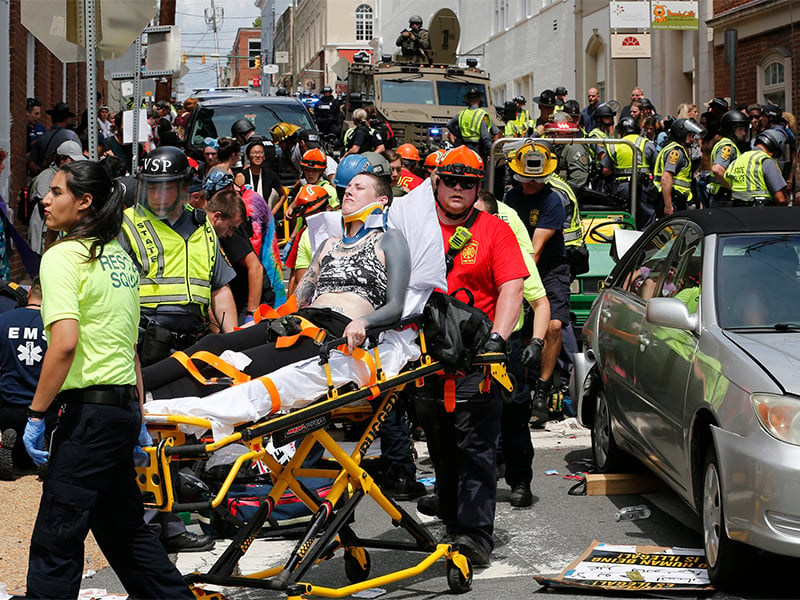 Rescue personnel help injured people after a car ran into a large group of protesters after a white nationalist rally in Charlottesville, Virginia, on Aug. 12, 2017. One person was killed and 19 were injured in the incident. (AP Photo/Steve Helber)

(RNS) — For nearly four years, Amy Spitalnick led the effort to hold organizers of the deadly 2017 Unite the Right rally in Charlottesville, Virginia, legally liable for the violence of that day. Her effort paid off last year, when a jury found a group of white nationalists liable for $25 million in damages.

Now Spitalnick, executive director of Integrity First for America, is moving on to a new job.

In November, she will become CEO of Bend the Arc: Jewish Action, a left-leaning organization that blends community organizing, political advocacy and leadership training about white nationalism and anti-Black racism.

Having accomplished its goals, Integrity First for America will shutter by the end of the year, even as lawyers who argued the lawsuit will continue to work on post-trial motions and ensuring the judgment is collected.

Spitalnick, 36, who gained a reputation in the Jewish media as a modern-day Nazi hunter, is ready for a new challenge.

“We’re at a moment that is so existential in the fight for democracy, freedom and justice,” Spitalnick said. “Bend the Arc is wholly aligned with the work I’ve been doing for the past four years.” 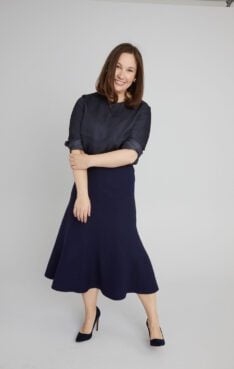 Spitalnick, who previously worked as communications director for the New York State attorney general’s office, is not a lawyer. She was drawn to fighting for justice, in part, by her grandparents, Holocaust survivors who immigrated to the United States in 1949.

“Watching neo-Nazis with torches chanting ‘Jews will not replace us’ was a pivotal moment,” she said.

When Integrity First for America came calling, she couldn’t refuse the offer to be the public face of the civil case against the organizers of the 2017 rally, who were accused of violating their victims’ civil rights. Friday is the fifth anniversary of the rally, organized to protest the planned removal of a statue of Robert E. Lee from a park at the city center.

On Aug. 11, 2017, some 300 people, mostly white men, staged a torch-lit march on the University of Virginia campus. The following day, neo-Nazi James Fields Jr. drove his car into a crowd of counterprotesters, killing Heather Heyer, 32, and injuring dozens of others. Fields, who is serving a life sentence for murder, was named in the civil suit, along with Richard Spencer, Jason Kessler and Christopher Cantwell.

Even as the jury deadlocked on two federal conspiracy charges, the verdict on the civil rights charge was a clear rebuke of the rally organizers. They were held responsible for violence motivated by racial, religious or ethnic animosity.

“Amy really wrote a new playbook for holding white nationalists accountable and successfully marshaled the resources of the Jewish community and beyond to take on this ambitious new work,” said Sheila Katz, CEO of the National Council of Jewish Women. “She will bring that voice to Bend the Arc.”

The previous CEO of Bend the Arc, Stosh Cotler, stepped down earlier this year. The organization has been run by interim CEO Jamie Beran.

The 11-year-old organization, with a staff of 47, advocates on a variety of issues on Capitol Hill and has a small political action committee that this year contributed to 43 candidates, all Democrats.

Spitalnick said she doesn’t anticipate bringing lawsuits against white supremacists or neo-Nazis as part of Bend the Arc. But she said there’s a lot of organizing work on behalf of the Jewish community that needs to happen to stem the rise of white nationalism.

“None of us are safe in a society where white supremacy and white nationalism are becoming normalized and running rampant,” she said. “Being unequivocal about the greatest threats that exist in our country is so important.”